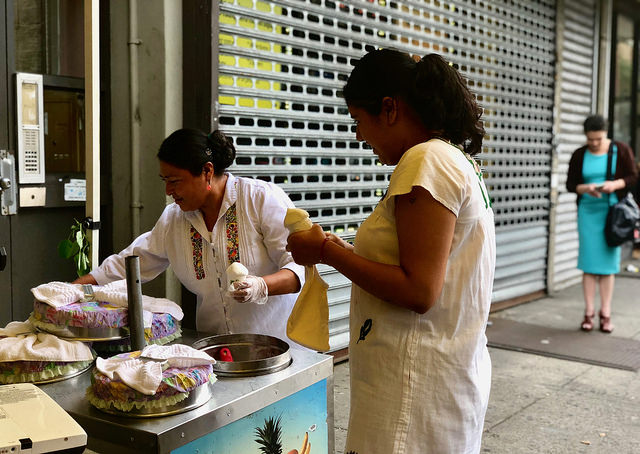 La Morada is a restaurant that multitasks. From the kitchen, flautas, enchiladas, mole, tacos are served up. In their dining room, the tables double as a community space, where the words “No Mas Deportaciones” and “Black Lives Mattered” are painted on doors and corners, where a flyer saying “Vote” and “Resist” is plastered repeatedly on the Mott, Haven, Bronx entryway.

Last night it served as the venue for the Bronx Museum’s second installment  of their Bronx Speaks series, a program that combines art and social justice. Neighborhood women,street vendors, chefs, activists, teamed up with art collectives to trace their journeys to Mott Haven, their home. Throughout the night speakers took turn sharing what the community of Mott Haven meant to them. For the outsiders, from the art collectives, it was an opportunity to share why they became involved.

Yajaira Saavedra, the daughter of the owner of La Morada is one of those women who needed space to express her fear and frustration at the way her neighborhood is changing.  “As an undocumented immigrant, I can’t rely on the NYPD,” Saavedra said, her voice shaking. “I felt safer when they weren’t everywhere. I feel safer when it is just my community.”

She spoke at length about the need to fight back against the gentrification in the neighborhood, that an increased police presence was a danger to a largely black and brown community, to a community of immigrants, street vendors, and working class people.

Yajaira anecdotes are reflective of the neighborhood’s statistics: Mott Haven is 72 percent hispanic, and 25 percent black. Of the 94,000 residents in the neighborhood, 36 percent have a limited proficiency in English. Mott Haven has the highest percentage of adults who have not completed high school in all of New York City and 46 percent of the district lives below the federal poverty level. The neighborhood has the highest rate for child asthma in the whole city,  nearly three times the city average.

Her sister, Carolina Saavedra, the su chef of the restaurant, learned to cook in Mexico, at the Oaxaca Culinary Institute. Carolina was first in the first speaker in the series. Upon returning to the United States, she was dismayed to realize that her Mexican cooking experience wasn’t good enough for most restaurants. She looked around and saw the food of her culture, the precious mole which once used to be considered a gift to the gods, offered up in knock off restaurants for twice the price.

The art that Carolina made was for her children, and for the children she watched grow up in the neighborhood. She recreated “The Hungry Caterpillar” for the kids, and the culture she knew. The caterpillar munched on guacamole and rice and beans, not candy or sandwiches.

As she read her story, Carolina broke down in tears. So did many others who presented their art that night. A woman named Eutiquia Herrera, who sold coco helado immigrated to the U.S. from a poor, small village in Mexico. Juana Tapia, who learned to make her mother’s perfect mole sauce because she missed her so much, but could not return to Mexico – the mole was her only connection to home. Carmela, who made her art to smell like the flowers she misses in Mexico, and that she grows in the Mott Haven community garden.

David Keef, a war veteran and program director of the Frontline Arts group, used papermaking as a way to deal with his traumas – he taught the method to the women of Mott Haven, hoping to make a connection to the community and learn more about people different from him.

“As a veteran myself, I feel somewhat responsible and I feel guilt for the systemic racism, the nationalism and colonialism that America perpetrates,” Keef said into the crowded dining room. “I feel deeply betrayed by my country. A country that strips people of innocence and culture, a country that dehumanizes an entire population”

The betrayal Keef feels, one he tied to mass incarceration, increased deportations, and the criminalization of the poor – an average Mott Haven resident might have an experience with any, or all three, scenarios – Mott Haven has one of the highest incarceration rates in the city, nearly double the average for the Bronx.

For Keef, working with communities like Mott Haven was a way to teach his form of storytelling, one through art, to other people who would benefit from telling their stories. Mott Haven, which was recently almost renamed the Piano District in an effort to gentrify the area, is suffering from rising rents and increased costs at local retailers, a way to share personal experiences in a community setting was a needed catharsis.

Each woman could not separate the importance of their home, their community in Mott Haven, from the feelings of safety and happiness felt in their lives. All feared what gentrification and over policing could do to a community connected by street vendors.

“Who’s going to know us? Who’s going to see us? Who will we talk to?” Carolina Saavedra asked, while clutching the art that featured vignettes of her life.