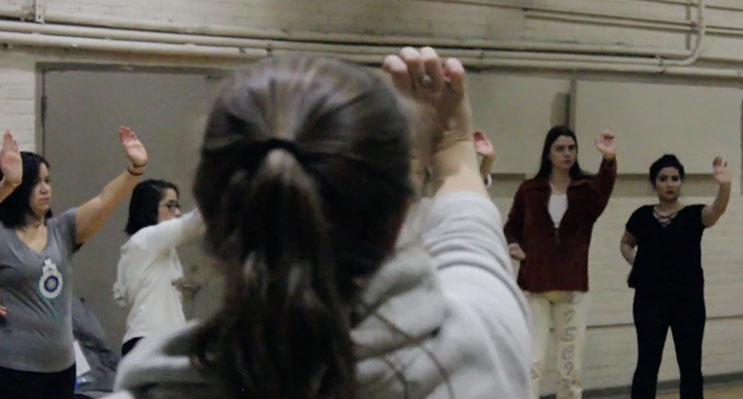 Muslim Women Come Together to Combat Hate from Pavement Pieces on Vimeo.

In the basement of Judson Memorial Church in Greenwich Village, women gathered recently  to participate in the Muslim Community Network’s self defense class. Lately, it has been busier than usual.

“I believe that we got so many people interested and all of these RSVP’s because people were panicked after the election,” said Emaan Moosani, Program Director at the Muslim Community Network.

There has been an increase in hate crimes toward the Muslim community. The day after the presidential election, various attacks and hate oriented crimes were reported around the country.

“The need is really strong for us women to be able to defend ourselves, in light of all the Islamophobia and negative stuff that has been happening for the past almost two years,” said training participant, Ayesha Mohammed.

In a recent study, The Southern Poverty Center found that the number of groups on the American radical right has expanded from 784 in 2014 to 892 in 2015 — a 14% increase. This hostile climate has translated to an increase in attacks on vulnerable populations. The FBI hate crimes statistics show that assault, attacks on mosques and other hate crimes against Muslims surged by 67% since 2014. This increase is the biggest since 2001 when more than 480 attacks occurred in the aftermath of the 2001 attack on the World Trade Center.

During the training, Magda Kamel, a teaching assistant, shared an experience she had following the elections.

“In the morning, on my way to the mosque somebody came and whispered bad words, f- words, and many things. At first, I ignored him, and he came closer… I was so scared of physical touch, but he came closer to curse me more,” Kamel recalled.

The fear in her community is overwhelming.

Magda Kamel tells the story of a young Muslim girl's fear. from Pavement Pieces on Vimeo.

Mariana Aguilera served as a facilitator at the event. She emphasized that the training space was designed to help women cope not only with immediate danger but also with a state of being when facing a constant threat.

Participants stayed after the event to exchange contact information and provide words of support to the women that shared their experience during the training.

“I feel a whole lot more confident than when I walked in the room,” said Magda Kamel.