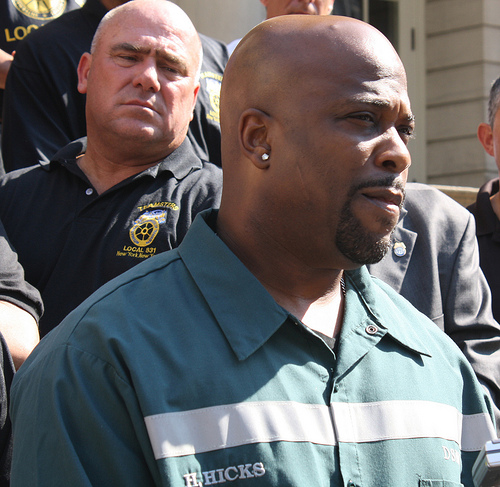 Hugh Hicks, a sanitation worker was attacked while picking up trash. He told his story in front of City Hall during a press conference. Photo by Jia Guo

A new law signed by Gov. Andrew Cuomo last month prosecutes anyone who assaults a sanitation worker in New York City. The attackers now could face a sentence of 2 to 7 years in prison. This law provides the same protection to sanitation workers as firefighters and other uniformed forces.

In a press conference today in front of City Hall, Harry Nespoli, president of the Uniformed Sanitationmen’s Association expressed his gratitude to Charles Hynes, Brooklyn District Attorney for helping develop the law, and to other supporters.

Hynes said the new law will let the public know the consequences if they assault a sanitation worker.

Six thousand public sanitation workers are working in New York City, 160 of them are women. They work 8-hour shifts driving up and down the city’s streets picking up garbage, but sometimes trash hauling turns violent. Nespoli said in 2010, six sanitation workers were assaulted, but that number doubled in 2011.

In a press release Nespoli said that sometimes sanitation workers are assaulted for a multitude of reasons, but mostly by impatient drivers stuck behind the trash trucks on narrow streets.

Hugh Hicks, 48, a sanitation worker at the press conference, said that a woman punched him in the chest in Queens because his truck blocked the street and she couldn’t drive past it.

“I was shocked and can’t hit back,” Hicks said, “I am doing my job. I didn’t block the road on purpose.”

Juan Ramos, 77, a retired sanitation worker, who was on the job for 24 years, said he was hospitalized after an attack while was picking up garbage three years ago. He said an impatient driver yelled at him and asked him to move the truck. When he did not, the driver pulled out a shovel and hit him with it, fracturing his ribs.

“Those men and women are heroes,” Nespoli said during the press conference. “The new law will make their jobs easy on the daily basis. It is like punching back.”