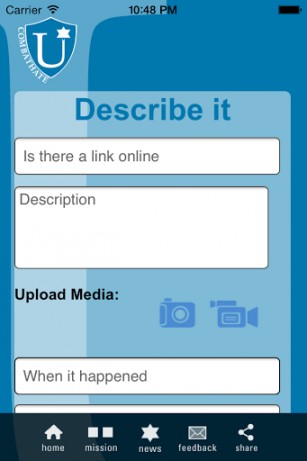 A new phone app called CombateHateU was released today to help Jewish college students deal with displays of anti-Semitism on their campuses.

Officials from the Simon Wiesenthal Center along with representatives from the historically Jewish fraternity Alpha Epsilon Pi gathered this morning at the Museum of Tolerance on 42nd street in Manhattan, New York, to announce the introduction of this new tool to fight anti-Semitism.

“We need to empower people to stand up and take action, reclaim their territory, their rights,” said Mark Weitzman, director of government affairs for the Simon Wiesenthal Center. “It will allow people, Jewish, not Jewish, anyone who cares about freedom of speech and quality of intellectual and academic discourse on campus to participate and to be able to make it a safer and more secure place for people.”

In the wake of recent demonstrations of discrimination displayed at Emory University and Ohio University, the leaders of these two Jewish organizations feel the need to stand against anti-Semitism is as strong as ever. They believe the fighting along the Gaza strip has increased hostility towards Jews around the country. Weitzman, a native of Brooklyn, New York, said this issue is prevalent all across the globe.

“This is a problem that is going on internationally, certainly across Europe,” said Weitzman during the press conference. “There was just a case a week or two ago, where Jewish students were barred from a British sporting good store because they looked Jewish.”

CombateHateU is an advanced application based off a previous model released by the Wiesenthal Center that was intended for use by high school students. The new model allows college students to inform members of the Wiesenthal Center when and where illustrations of anti-Semitism are occurring, whether it is physical actions, or derogatory speeches from students and professors. Students can describe the event, or even post videos and audio links of what occurred. The application first reminds students to go through their campus institutions designed to handle social matters, and also insures them of their anonymity when reporting these issues through the application.

“It has the opportunity to give us a description, tell us when something happened, let the student tell us who they contacted,” said Rick Eaton, co-author of “Digital Terrorism and Hate” and one of the main contributors towards the development of the application. “We never would give that information out, but it would give us the opportunity to use the weight of the Wiesenthal Center to contact campus authorities or whoever that we think might be able to help in these incidents, but it is always confidential.”

Eaton, along with the other senior members of the Wiesenthal Center, are glad their idea has come to fruition, although now they want to make sure Jewish students around the country are aware of the new tool they have at their disposal.

“One of the most important things, and we ask the brothers of AEPi that are here, is to share this app, not only with your AEPi brothers but with your Jewish friends on campus that may need to see it,” said Eaton, who works out of the Wiesenthal Center’s Los Angeles headquarters.

One of those AEPi brothers in attendance was Nissan Mirakov, 19, from Fresh Meadows, Queens. Mirakov attends Baruch College in Manhattan, and is vice president of the Hillel House at Baruch. Mirakov is proud of the active population of Jewish students at Baruch, and specifically in his fraternity, but voiced concern for the potential Jewish student who is not surrounded by other Jewish people, or is not affiliated with any Jewish organizations.

“Nationally I think it will help us out a lot,” said Mirakov.