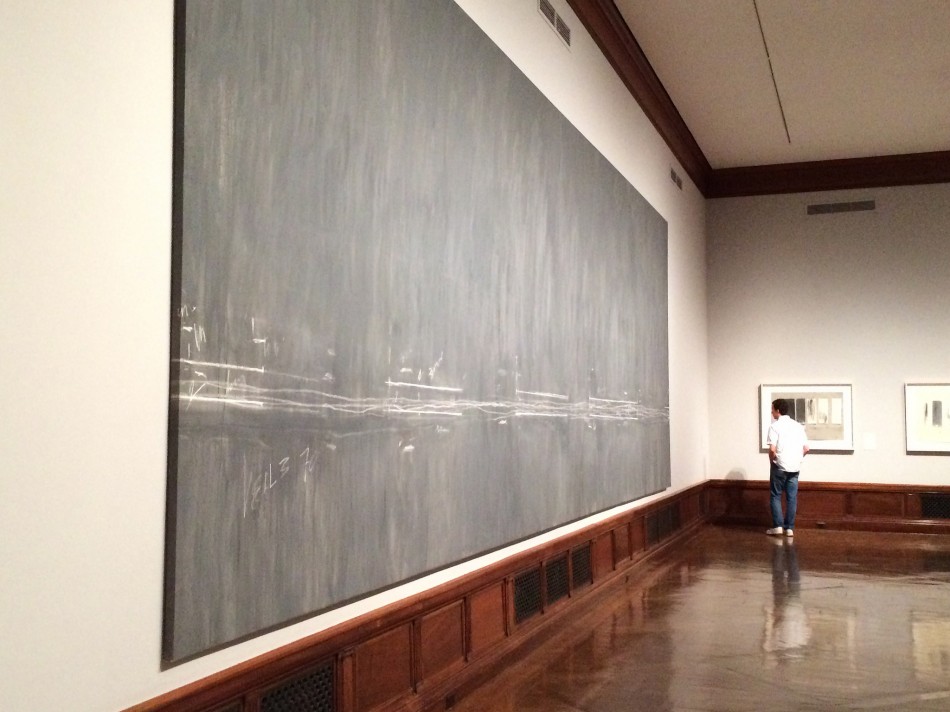 Too wide to be grasped at once, “Treatise of the Veil” forces the viewer to move literary along its surface, constantly shifting perception. Photo by Maria Panskaya

Too wide to be grasped at once, “Treatise of the Veil” forces the viewer to move literary along its surface, constantly shifting perception. Photo by Maria Panskaya

Three new exhibitions opened on Friday at the Morgan Library & Museum in Murray Hill, featuring paintings and sketches from private collections, which were never exhibited before in New York City. The first two galleries displayed works of French and American virtuosos of 19th and 20th centuries, while the third gallery was exclusively dedicated to artist and illustrator, Richard McGuire, and his comic book “From Here to Here.”

In spite of the fact that exhibitions presented different styles of painting and were coming out of different art schools, all of them had one aspect in common—an idea of passing time.

“When I first saw the comic strip it was clear that it was something original,” said Joel Smith, curator and contemporary drawings department head. “Before McGuire, I don’t know anybody who systematically has taken apart the way the narrative action works in comic strip and made the experimentation with time the subject of the strip.”

Even the name of McGuire’s book, “From Here to Here,” reflected on the idea of time traveling and people interacting with different time passages. Despite the fact that the book hits bookstore shelves only in December, the exhibition has given an exclusive insight into some of the book pages, as well as has provided visual access to McGuire’s creative process—from petit hand-traced Persian rugs to magazine cutouts of fashionable shoes to bold sketches of his main characters to the 16th century hand-drawn religious manuscripts.

“The subject of the comic strip hardly matters at all. It’s hardly trivial at all and none leads to the other in the systematic way,” said Patrick Milliman, museum administrator and director of communications. “All action occurs in the reader’s head. It is sort of the essence of what its called modernism and fiction writing and that’s what makes the book enjoyable.”

McGuire was well known before he created this groundbreaking comic strip concept. His carrier as an artist started as a children’s book illustrator and continued on in the New Yorker magazine in the 1990s, where his humorous, but complex and layered at the same time, sketches were appearing in every issue and sometimes even on the magazine covers.

While McGuire preferred to experiment with graphic novels, Cy Twombly, an American painter who spent most of his life in Rome, Italy was concentrated more on meditation on time and space.

An enormous canvas painting, which was about two story-building high and 33 feet in length, along with 12 other Twonbly’s creations, was arranged in the middle of a spacious room to create a feeling of freedom and limitless. The creator of “Treatise of the Veil,” Twombly had left clues about how to read and understand his work.

“There is an in sign on the left, and out sign of the right,” said Isabelle Dervaux, the gallery’s curator. “You can see how the density of brush strokes decreases as you walk along the painting; you can instantly visualize the passage of time, from birth to death.”

The last time  “Treatise of the Veil”  was displayed in New York was in 1985 and it had remained in a private collection until now.

The other French painter whose work illuminated the halls of the Morgan Museum was Theodore Rousseau and his collection of oil paintings “The Untamed Landscape.” Rousseau belonged to the Barbizon School of masters, whose preferred subject was the primeval wooded forest landscape.

“His main focus was never on a subject,” said Amy Kurlander, an expert on the 19th century French painters. “Rousseau has always aimed at capturing a moment, like on wind that powerfully brings the trees down or waterfall and the immediacy of water falling down.”

Rousseau had achieved the at-the-moment effect with use of bold colors, multiple layers and bizarre shapes that some of his views contained.

From Rousseau’s relaxing oil-painting landscapes to Twombly’s charcoal lines to McGuire’s modernistic graphical boards and comic strips, the exhibitions wouldn’t have been possible without generous donations from private collectors as well as city’s active involvement.

“Every specimen here is unique on its own,” said museum goer Elizabeth Sanchez. “You can never get enough or get tired of them. A 15-minute exposure to art per day increases your brain potential and helps to relieve your daily stress. It’s particularly good for college students who are under constant pressure all the time.”