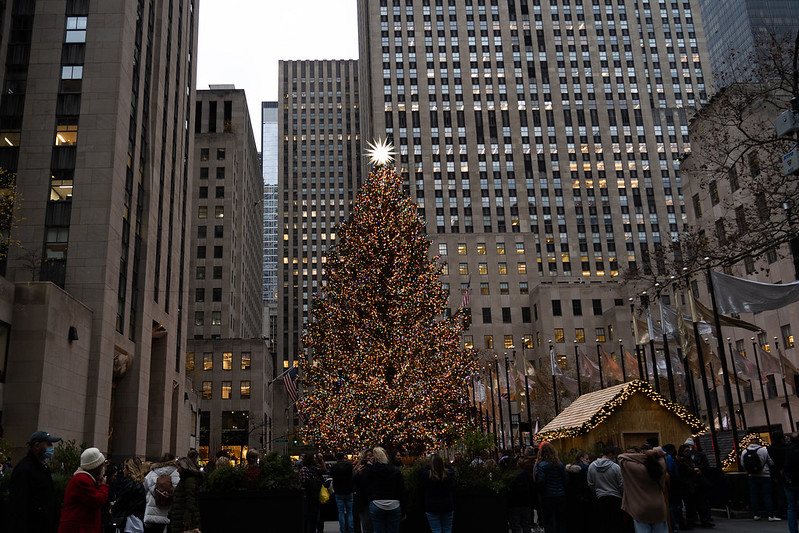 The 79-foot tall, nearly 12-ton Norway Spruce found its new home at the Rockefeller Center Plaza after its long journey from Maryland. The tree was lit on Dec. 1 with over 50,000 LED lights. Photo by Laura Studley

All over New York, lights are being hung around trees, and holiday markets are bustling once again. Ice rinks, armfuls of shopping bags and floor length jackets are a common sight on the streets of the city.

But amid the holiday cheer, Covid still looms in the back of people’s minds.

“You’re apprehensive because everyone is coming back,” said native  New Yorker Tammy Lassiter. “Being here, being the ground zero of Covid, you do have reservations because everyone from everywhere is coming. Outside of that, you do want to be a part of something.”

New York has suffered both economically and socially during the pandemic, and the drop in tourism did not help.

The city has seen an abundance of tourism the past ten years, but in 2020, the number of visitors to New York City fell by 67 percent to 22.3 million, compared to 66.6 million in 2019, according to the Office of the New York State Comptroller.

A report from the office said that the tourism industry has suffered a 75 percent drop from $80.3 billion in 2019 to $20.2 billion during the pandemic.

But with the holiday season already in full swing, city officials anticipate many tourists will be visiting the city, despite Covid’s new variant, Omicron.

“Everything [is] coming back full strength, the way we love it,” Mayor Bill de Blasio said in a press conference. “Hundreds of thousands of people there to celebrate. We can finally get back together again. It’s going to be amazing. It’s going to be a joy for this city.”

As of Dec. 6, there have been five cases of the new variant in New York City after the first case was discovered in California on Dec. 1.

City data shows that about 70% of people are fully vaccinated. Deaths are decreasing, but the total cases are on the rise, even with high vaccination rates.

Because of the holidays, De Blasio warned New Yorkers to get their booster shot.

Crowds this holiday season are expected to be the “largest since the start of the pandemic,” according to estimates from the Mayor’s office.

Last year, New York resident Emily Dean was able to go ice skating at Rockefeller Center because hardly anyone was in the city, she said.

“New York feels alive again and a little bit more normal,” Dean said. “I got a booster, so I’m kind of less afraid. It’s just nice to have people around again.”

The Macy’s Thanksgiving Day Parade had 50 million viewers this year with an approximate 2.5 million people who attended in person, so it’s no surprise that crowds flooded the Rockefeller Center to witness the tree lighting on Dec. 1.

“I’ve been encountering a lot of tourists here, and that’s great, but you don’t know what to expect,” Lassiter said. “You’re happy to welcome people back and I know people come here because they know New York City isn’t playing around like other places, but it’s still hard to feel 100% comfortable.” 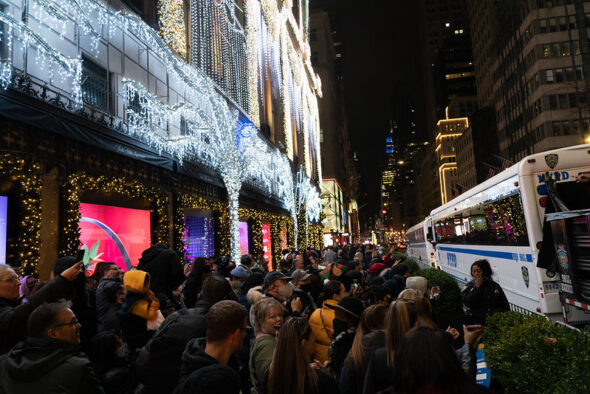 Crowds gather to see the Rockefeller Center Christmas tree lighting. Large crowds prevented some onlookers from getting to close to the tree which was lit on Dec. 1 with over 50,000 LED lights. Photo by Laura Studley

Nancy Sedgwick and Karen Janney have travelled from San Diego to New York for Christmas for years — but last year they broke tradition.

“It feels good to be out enjoying things again,” Sedgwick said. “We love the lights, we love the Christmas markets. It’s tradition, it’s the Christmas spirit. This country’s been in a bad place for many reasons for a while, a lot of ugliness, but now everybody seems to be in a better mood and happy.”

Janney said that even with the crowds and Covid, she is thrilled to be back in the city.

“I mean it’s just unlike anything else,” she said.

And though there are more tourists traveling during the pandemic, New Yorker Ariana Collur said that part of the Christmas spirit is to gather and have people visiting the city.

“It’s great to have New York back,” said Collur. “I love Christmas time. It’s really nice to see everyone around. The more the merrier, as long as we’re safe.”

Senior Vice President for the Times Square Alliance Regina Fojas said the alliance will be ready for “hundreds of thousands” of people at this year’s event. Fojas said that alongside the ball drop, viewers can anticipate a number of performances to celebrate the new year.

“We are ready and thrilled to welcome a full house of revelers back to Times Square to celebrate the New Year this year,” Fojas said. “Now more than ever we need to come together to revive our favorite traditions with our loved ones – reflecting on a tough year behind us while looking forward to a new year with hope.”

Peggy Ellis, a vendor at Union Square Market, has lived in New York for 25 years. Ellis said that she is grateful to be back because a lot of vendors suffered due to the pandemic.

“There’s something special about New York during the holidays, and I do think people missed it. I know I did,” Ellis said. “I think people were sad that they couldn’t be here last year. I’m finding a lot of holiday cheer around.”

Heather Fay, Union Square holiday market vendor and owner of Herbs Fit Life, said there have been a lot more tourists around the market. She has a shop location in the East Village that she described as a “ghost town” during the pandemic, but is more hopeful, given all the people she’s seen visiting the market.