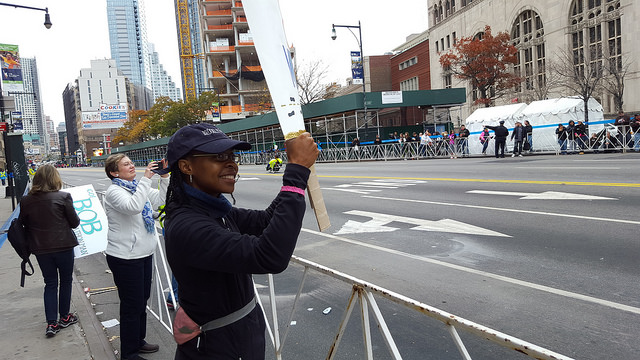 Hundreds of 2015 New York City Marathon supporters lined up along 4th avenue in Downtown Brooklyn, which marked the eighth mile of the marathon’s course.

Among the supporters stood Kishel John of Brownsville, Brooklyn. John came to support not only her two friends who were running today, but to cheer for all the runners. John’s friends have both overcome breast cancer, she said as she pointed to her pink bracelet with pink ribbons marked around it, the universal symbol for a breast cancer supporter.

“I just want to be here and see them at a milestone,” she said. “You never know what’s going to happen in your life,”

John saw the hard work her friend put into training for the marathon and said she may do the same someday.

“One of my friends started training two years ago, doing mini marathons and half marathons,” she said. “It takes a lot of training and a lot of dedication to sacrifice and participate in this event.”

John believes that participating in the race is more than a fun thing to say you did once, she believes it’s about overcoming situations, gaining the mental and physical preparedness to participate in the marathon.

“I think it’s more than a bucket list, it’s something you see younger people and older people doing,” she said. “It’s just about having a point in your life when you have that mental determination. It’s not about running 20 miles, it’s about preparing yourself for this journey no matter what.”

Among the supporters sat Ricky Dick in his wheelchair cheering on the adaptive athletes who were hand-cycling in the marathon. 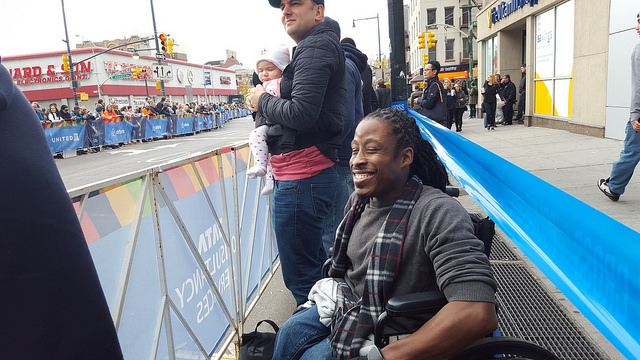 Ricky Dick smiles as the New City Marathon participants pass by. It’s his first year attending the marathon. Seeing other’s with disabilities participate have inspired him, he said. Photo by Taisha Henry.

Dick, who has from spina bifida, laughed and talked with other spectators while never forgetting to cheer for those passing by. It was his first time attending the marathon, should the weather allow it, he won’t miss another. He said he was happy to see other people with disabilities participate in the race.

For Dick, attending the race encouraged him to try a marathon one day, something he was always told to try, but never felt he would do.