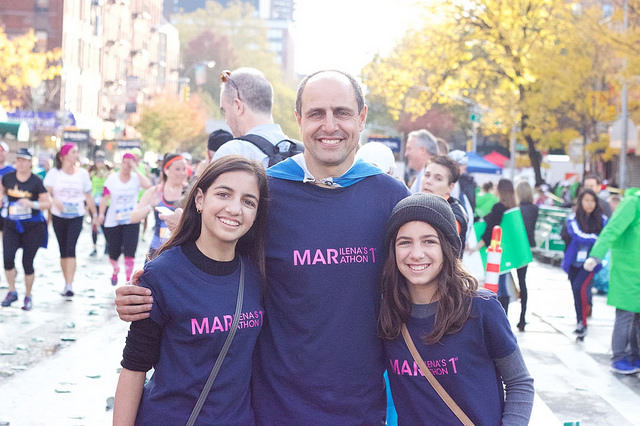 Yannis Glyptis, 48, and his two daughters Maria, 13,(left) and Thaila, 12, (right) waited for mother and wife, Marilena to pass by East Harlem to show their support for her first marathon. Photo by Ugonma Ubani-Ebere

As the sun peeked through the clouds in the afternoon, and used green cups littered the streets of East Harlem, many runners who had been running since the early morning, trudged on to finish the New York Marathon. Spectators, families, and friends from every part of New York City and all over the world, aligned the streets with signs and shirts dedicated to their loved ones, encouraging them to finish.

One of the spectators, Yannis Glyptis, 48, a Greece native, now living in Dykers Heights, Brooklyn, waited anxiously for his wife, Marilena Glyptis, 37, to pass through East Harlem at 117th Street and 1st Avenue. His two daughters, Maria,13, and Thaila,12, wore “Mommy Strong” shirts and held signs, as they waited for her.

“My wife has been running for three to four years,”he said. “She has done half marathons, but this is her first time running a marathon, and this is our first marathon as a family.”

Glyptis, who has run half marathons with his wife has always encouraged her as a runner.

“We always carry a sign that says “Mommy Strong” every time she runs,” he said. “Wherever she goes, when ever she runs, we have it.” 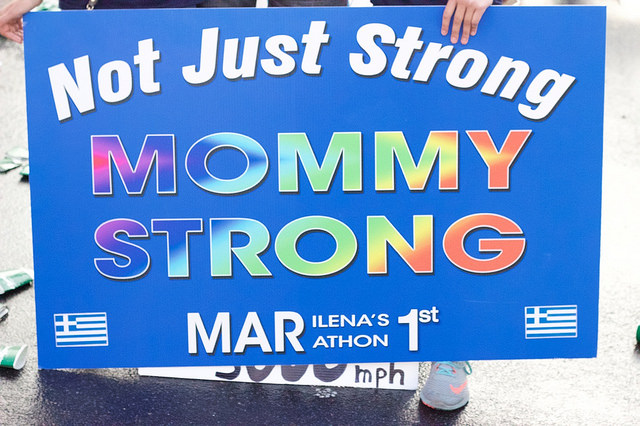 The Glyptis always carry a “Mommy Strong” sign to show support for Marilena whenever she runs.
Photo by Ugonma Ubani-Ebere

This year for her first marathon, Glyptis and his daughters have been following Marilena at every stop possible to encourage her every step of the way.

“We followed her from Brooklyn,” he said. “We did a stop in Queens, here at East Harlem, and now we are headed to the other side of Manhattan to follow her to the finish line.”

Glyptis proudly wore the Greek flag as a cape as people stopped to take pictures of him and his daughters.

“Brooklyn has a big Greek community,” he said. “But New York is the center for all cultures, and this marathon is for everybody because your soul decides what you can do, and what you can accomplish. “

Finally came running down the street. Her hair was pulled back into a ponytail with a pink headband, and she wore her “Mommy Strong” shirt to match her daughters. Though she was sweaty, she took her headphones out of her ears, smiled and stopped to take pictures with her family.

“She’s such a good role model, and she sets just a really hard standard for me,”her daughter Maria said. “I really want to run a marathon myself when I grow up, so she is really pushing me to do well myself.”