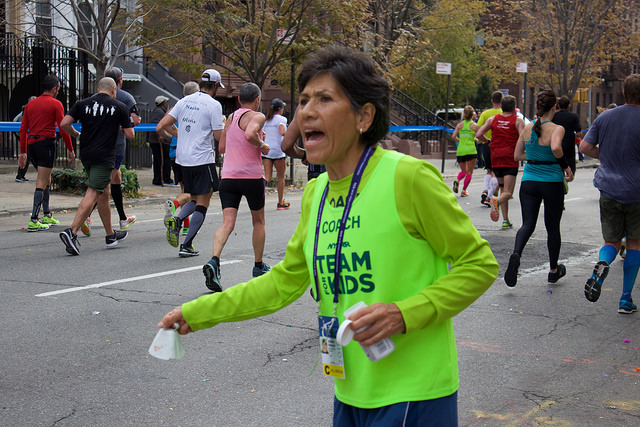 Asteria Claure, 61, cheers on the New York City Marathon Runners, with a cowbell in one hand and chewable vitamins in the other, as the ran through Harlem. By Astrid Hacker

Wearing a neon vest with the word “coach” plastered across the front, Asteria Claure, 61, cheered on the 2015 New York City Marathon runners for the 12th consecutive year, as they ran through Harlem today. She knew how it felt having run in the marathon for 10 years.

Claure has attended the marathon, as either a runner or supporter, since 1994. Born and raised in Bolivia, she said she had always loved sports, but none of them resonated with her like track and field.

“Running was the best for me, I learned to challenge myself,” she said.   “When I was in basketball I used to get upset when I lost the game, I didn’t like it. I went into track, I was winning, I said it’s going to be on me.”

After graduating from college, Claure spent 20 years in Venezuela running and working as a physical education teacher and coach.

She said that it was a challenge that brought her to New York in 1994. A friend challenged her to run in the marathon and from there she fell in love with the New York City Marathon. She returned to Bolivia in 1995 and was invited to New York once again to take part in the World Champion Masters in Buffalo, N.Y.

“I came to the world champions and then after that I never went back to my country,” Claure said. “When I came to New York, the first thing I did is come to Central Park and look for the runners.”

Claure has since taken part in 15 marathons. She said that while she is still healthy she will continue to run and encourage others to do the same. 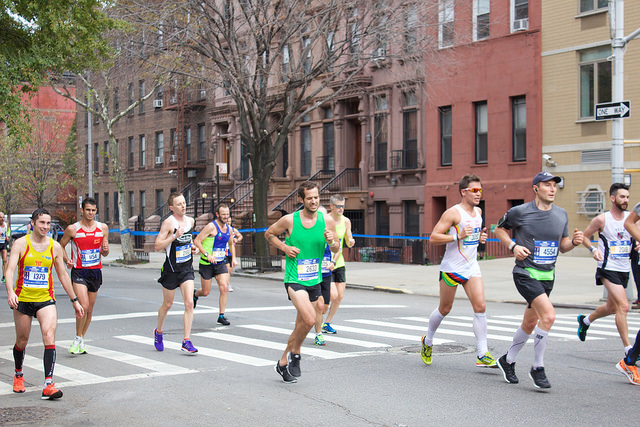 The New York City Marathon runners pushed through Harlem as they came to mile twenty-three with only three miles separating them from the finish line. By Astrid Hacker

Armed with a cowbell in one hand, she screamed advice to the runners that were slowed down by leg cramps and encouragement to those weary from the run as they pushed on. This year Claure cheered as a member of the organization New York Road Runners (NYRR) Team for Kids. The organization encourages children to run, and she was there to support the members of the organization that were taking part in the race.

She said that, for her, running is everything. It is her life.