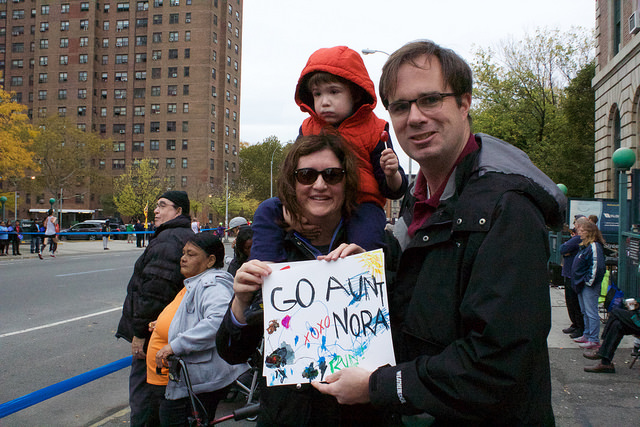 Arthur Warren Scullen came to the New York City Marathon with his wife and son to cheer on his sister, cousin, and his wife’s coworker. Photo by Elizabeth Arakelian

Former track runner Arthur Warren Scullin posted up at the intersection of East 138th Street and Alexander Avenue in the South Bronx early Sunday afternoon to cheer on his sister in the New York City Marathon.

As the marathon runners ran toward the 20 mile mark, church bells tolled and families with children in their Sunday best made their way through the crowds. The course runs right in front of the New York Police Department’s 40th Precinct where officers from several departments, including canine and counter terrorism, stood alongside cheering fans. Though traditionally a quieter part of New York City, those exiting the 3rd Avenue – 138 Street subway station were met with the sound of live jazz and cheering as loud as the bright green uniforms worn by volunteers passing out water and bananas to runners.

Like many onlookers, Scullin stood with his wife and son and brought signs: one for his sister, one for his cousin, and one for his wife’s coworker, all of whom were running in the marathon. In previous years Scullin has made his way to Brooklyn and the East Side and West Side to watch. This year, the South Bronx suited him since he works down the street and it provided a different perspective on the race.

“This is a unique point because this is where the runners start hitting the wall,” explained Scullin as a group of male runners jogged past. “The wall is after 18 miles the body starts to break down. The training is not for the first eight miles, it’s for the last eight miles.”

The South Bronx is a difficult part of the marathon because a significant amount of time has elapsed for runners, but the end is not quite in sight yet. 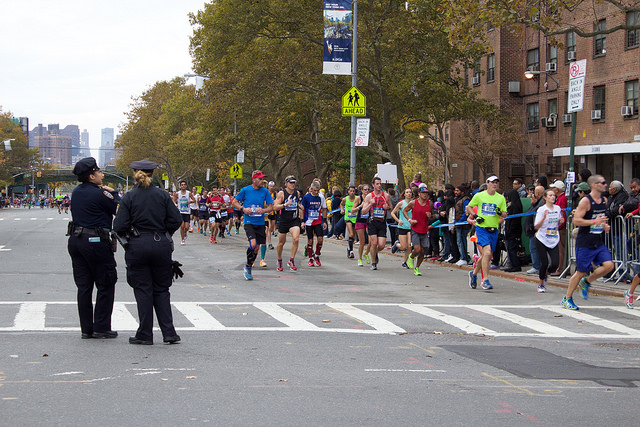 The intersection of East 138 Street and Alexander Avenue in the South Bronx was busy with participants in the 2015 New York City Marathon who ran through on their way towards Central Park and the finish line. Photo by Elizabeth Arakelian

“This is a tough part because you’re far north and you mentally want to get to the Central Park and finish it up,” said Scullin. “The crowd keeps you going through here.”

Scullin is familiar with being part of that cheering crowd since he’s been attending the marathon for years.

“This was always a family tradition,” said Scullin of watching the marathon. “My father always did this. He was always into track because he called it the purest sport.”

Scullin’s father was one of the executive directors of the Catholic Youth Organization in the Brooklyn Dioceses where sports programs are administered and a race has been named after him. Scullin’s father perished in the World Trade Center in the September 11, 2001 terrorist attacks, but each year his love of running lives on in his children who see the New York City Marathon not only a family tradition, but an homage to their father.

“My sister dedicates this to him,” said Scullin.