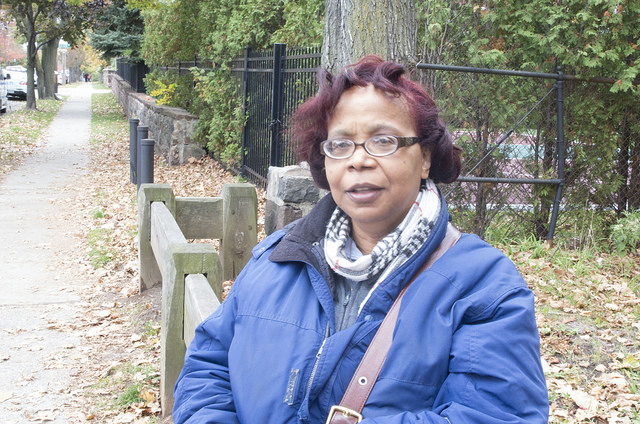 Vanis Trapp, 59, sits outside of Von Briesen Park. She was disappointed that she could not use the park to view the marathon as in previous years. Photo by Dale Isip.

Vanis Trapp sat on a low wooden post, her back to a large park covered with bright orange colors of fall foliage. She lamented the closure of Von Briesen Park in the Rosebank neighborhood of Staten Island due to the 2015 New York City Marathon.

A heavy police presence surrounded Rosebank today as morning preparations for the marathon drew to a close.

Large shuttle buses assisted runners on their way from the Staten Island Ferry Terminal to Fort Wadsworth, the starting point of the marathon, as police barricades lined the intersection of Bay Street and School Road.

Police closed certain public areas near Fort Wadsworth to accomodate
the NYPD Running Club,and the FDNY Running Club including Von Briesen Park. Neighborhood residents were disappointed that they could not use the park during the marathon as in previous years.

“Usually, this park was for the runners to get their heads together,” said Trapp, a Stapleton resident. “It wasn’t for a police group. I can’t even sit in the park now.”

Linda Mompalao, a Rosebank resident, was walking her dog, Buddy, to the park. She also could not enter the park, and thought the difference this year was, at the very least, strange.

“We’ve always been able to go up, into the park, and see the runners go over the bridge,” Mompalao said. “This is a city park, and the federal park guy is saying we can’t go in. That’s interesting.”

Park rangers and police officers were turning away people with without identification bands. In addition to Van Briesen Park, Fort Wadsworth itself was accessible only to runners, police officers, and park rangers.

Security precautions were likely in place due to recent bombings and acts of terrorism at similar events.

“It’s different, more police presence, different organization, more security.” said Terresa Daniels, 53, a Rosebank resident. “They probably know something that we don’t know. But with what’s been going on, what are you going to do?”