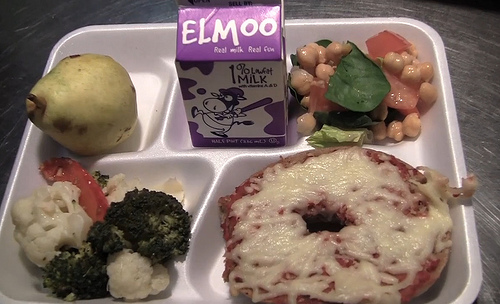 At P.S. 41 in the West Village, the kitchen is already turning out lunches almost completely in line with new federal regulations. The new rules went into effect last month and require fewer processed foods and more healthy ingredients. This pizza bagel is made with freshly-cooked sauce and olive oil instead of blended oils. Photo by Edna Ishayik

Judging by the joyous grade school cafeteria clamor, Pizza Fridays are the favorite menu line up of the students at Public School 41 in the West Village. On a recent Friday, the kindergarteners through fifth-graders bit happily into their gooey, cheesy, saucy lunches.

Warmed over toaster-oven pizza, this is not. Here, the mozzarella is fresh, the sauce is cooked in the morning, and the bread (bagels, in this case) are whole wheat. In fact, nothing that comes out of the school’s kitchen is processed. Everything is made from scratch.

That was the case even before new federal regulations that will upgrade the quality of the food school kids eat at lunchtime went into effect last month. Across the nation, cafeterias now will be forced to provide a healthier meal for their young customers. Schools will be switching from tater tots to sweet potato fries, ditching hot dogs for kidney beans, offering more vegetables and removing many processed foods.

But in New York City, meals mostly meet, and in some cases exceed, the standards now required by federal law.

“The City has been ahead of the curve when it comes to offering more nutritious meals to students,” said Marge Feinberg, a Department of Education representative. “With the new USDA guidelines, there are some factors we need to review, including costs associated with the new policy, but we support the push towards healthier, more nutritious food choices for students.”

She said restrictions on the amount of trans fats children are served have already been met, as have the low sodium standards. There will be some adjustments necessary to catch up with the grain-rich requirements and weekly saturated fat count, but Feinberg categorizes these as nearly complete.

In the kitchen at P.S. 41, the food served goes far beyond what the city or the new federal regulation asks. For example, though the new standards require only that blended oils be substituted for oils that contain trans fats, P.S. 41 goes further, using olive oil in many cases. It’s a healthier and better tasting alternative that costs considerably more.

P.S. 41 can afford the splurge partially because it’s a wealthier school in a neighborhood where the apartments can cost tens of millions of dollars. But the bonus actually comes from a donation through a partnership with a non-profit called Wellness in the Schools. WITS places a trained chef in the kitchens to push nutrition and healthy eating to it’s potential.

“We take what they used to do, and enhance it,” says Shani Porter, the WITS resident in P.S. 41’s kitchen.

One of the group’s sponsors, high-end supermarket chain Whole Foods, gifted olive oil to the 30 schools enrolled in the program. And that olive oil was another ingredient Porter used to upgrade Pizza Friday.

Last year, Porter was stationed at a school in East New York. Though the poverty level is higher in that neighborhood, the quality of what was served for lunch was essentially the same as what her new West Village students were served.

“There’s no difference,” she said. “All the schools go from a procurement list. They all get a budget depending on how many kids the school serves. Everything is the same.”

And the procurement list already meets the new federal standards.

But the delivery of a healthy lunch in East New York carries an important weight. Porter said that meal was often the only real meal many of kids got all day, so if it wasn’t nutritious, the kids were at a severe disadvantage.

Porter said the healthy food has been well received. The staff must keep an eye on the lettuce levels in the small salad bar set up near the kitchen because the kids come back for seconds.

“They choose from mixed salad, different vegetables — tomatoes, cucumbers, celery, chickpeas — and we make our own salad dressing as well,” Porter said.

Sometimes when a new food is added, like freshly-made vegetarian chili, some of the younger kids balk.

“They see anything green or anything brown and they say, ‘I want a peanut butter and jelly sandwich,’” Porter said.

But she counsels patience when it comes to testing young palates.

“Once they start to learn, then you don’t see that,” she said. “It takes a few times for the child to really like the food. You have to, not push it on them, but expose them to it. Teach them about it. Let them try it a few times.”

And when all else fails, sometimes Porter will allow for sandwich for a particularly picky eater. But even the jelly is healthy: Porter cooks down dried fruit and makes compote to spread between slices of whole wheat.

Since New York City schools are so close to complying with federal rules, even those without Porter stewing dried fruits and dicing tomatoes are eating healthier meals than their out-of-city counterparts.