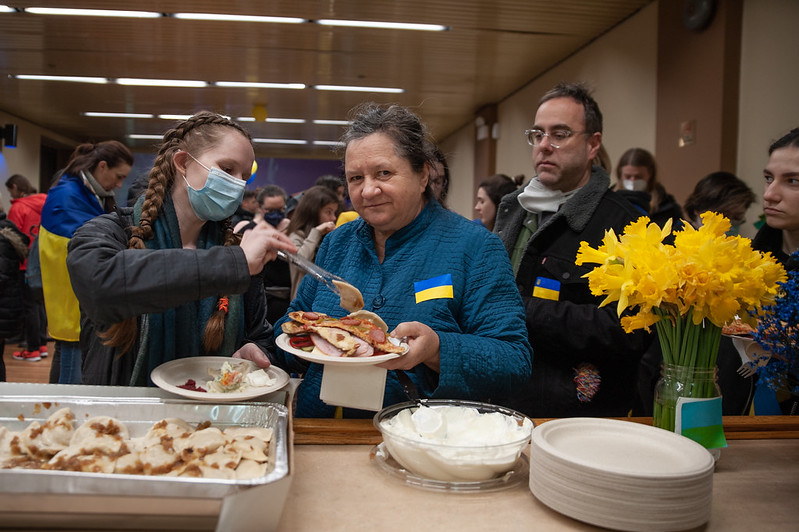 New York City is home to more than 150,00 Ukrainians, the largest such community in the country. And since Russia invaded Ukraine on February 24, Ukrainian East Village, also known as “Little Ukraine,” became a place to show solidarity with Ukraine, even though Ukrainian Americans are now stretched out in all five boroughs.

Ukrainians have many institutions and businesses in the Ukrainian Village bounded by Houston Street and 14th Street, and Third Avenue and Avenue A is the area where their ancestors originally lived after the first Ukrainian mass immigration wave during 1870-1899.

As the war goes on, the community keeps gathering for fundraising events, for instance, in the Ukrainian National Home above the Ukrainian Restaurant or for a prayer for their home and families fleeing the war at St. George Ukrainian Catholic Church.

Ukrainian flags are hanging from many windows in the neighborhood. Frequent are also posters expressing support to Ukraine like: “Peace for Ukraine,” or “Close the sky, save Ukraine,” and calls for medical supply donations, which people can bring to the local 9th police precinct.

Many New Yorkers support Ukraine by dining in the notoriously known Ukrainian diner Veselka that is now drawing in crowds. Its sales have been up at least 50%, said Veselka’s owner Jason Birchard to Fox Business.

To enjoy a plate full of the Ukrainian traditional meal pierogis or a bowl of beet soup borscht considered a symbol of unity, people don’t even mind waiting tens of minutes in a line long across the corner. 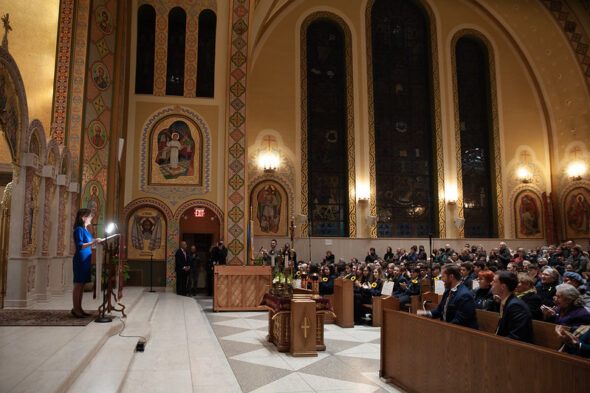 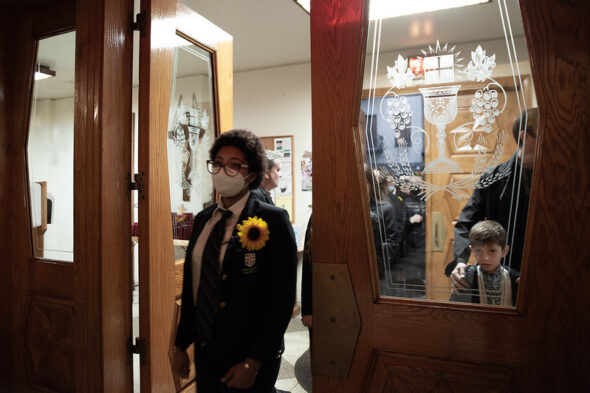 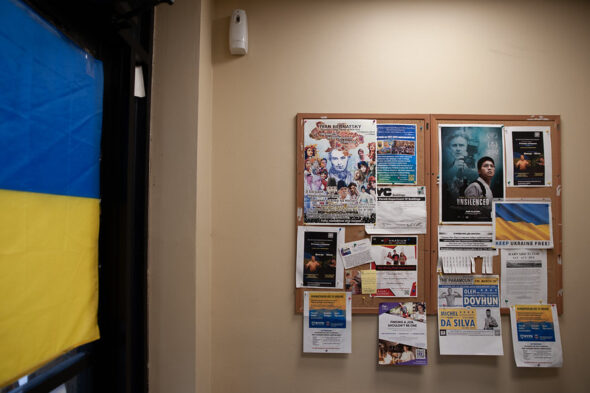 A bulletin board in the hall next to front doors in Ukrainian National Home with posters and flags showing support for Ukraine. March 5, 2022. Photo by Nikol Mudrová 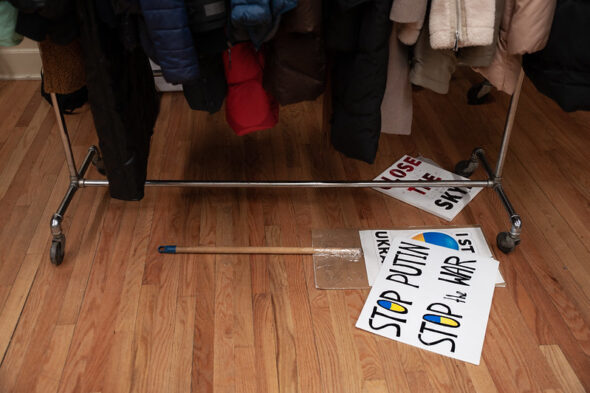 Ukrainian Americans came from a protest at Times Square, where they showed support for Ukraine and demanded closing the sky straight to Ukrainian National Home. They hung their coats on a rack and put signs away to listen to some Ukrainian folk music at a fundraising concert organized by Razom for Ukraine. March 5, 2022. Photo by Nikol Mudrová 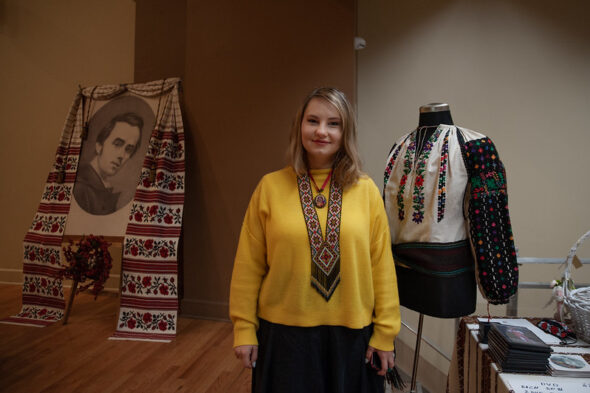 Oksana Izbyanska, a co-founder of the online Ukrainian marketplace UAartsy, in Ukrainian National Home during a fundraiser for Revived Soldiers Ukraine, a non-profit providing aid for medical rehabilitation of Ukrainian soldiers. Artists donated their artwork made with traditional micro-embroidery techniques and raised $7,539. Ukrainian Drama Theater of New York performed during the event and celebrated the 208th anniversary of Taras Shevchenko’s birth (in the portrait on the left). He was a poet, and his heritage is regarded as the foundation of modern Ukrainian literature and the modern Ukrainian language. March 14, 2022. Photo by Nikol Mudrová 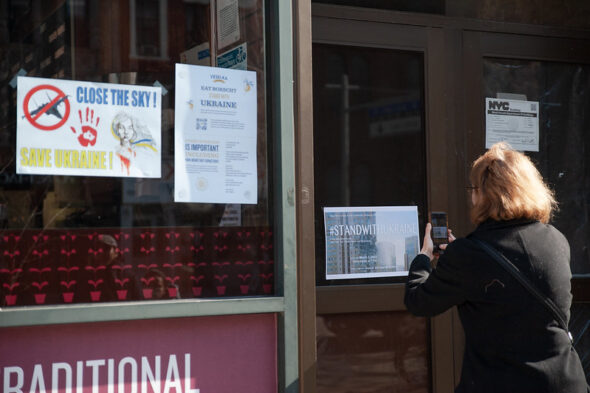 A woman stopped by a Ukrainian restaurant in East Village, Veselka. She took a snapshot of a poster with information about an event called #STANDBYUKRAINE that had happened on March 2 in the Ukrainian Museum. March 5, 2022. Photo by Nikol Mudrová 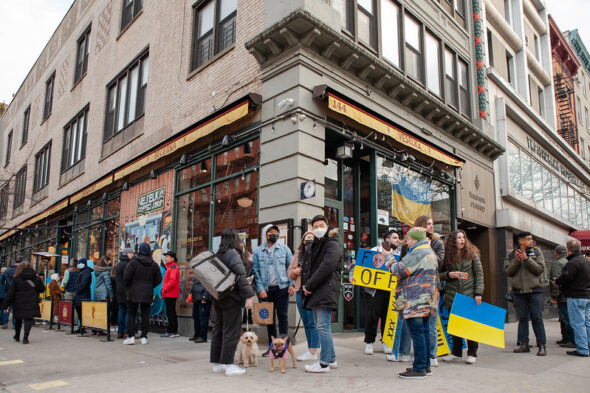 Line in front of a well-known Ukrainian diner in East Village, Veselka, is long around the corner most days since the invasion of Ukraine. By dining there, New Yorkers show solidarity with Ukraine. As a result, Veselka’s sales have been up at least 50%, said its owner Jason Birchard to Fox Business. March 5, 2022. Photo by Nikol Mudrová 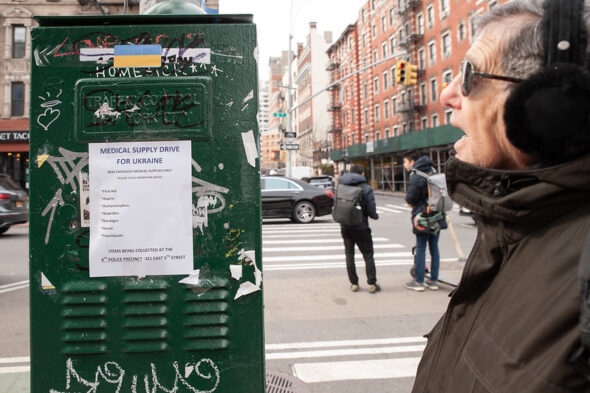 A poster across Veselka restaurant that calls for medical supply donations. All items are collected at the 9th police precinct a few blocks away – at East 5th Street. March 5, 2022. Photo by Nikol Mudrová 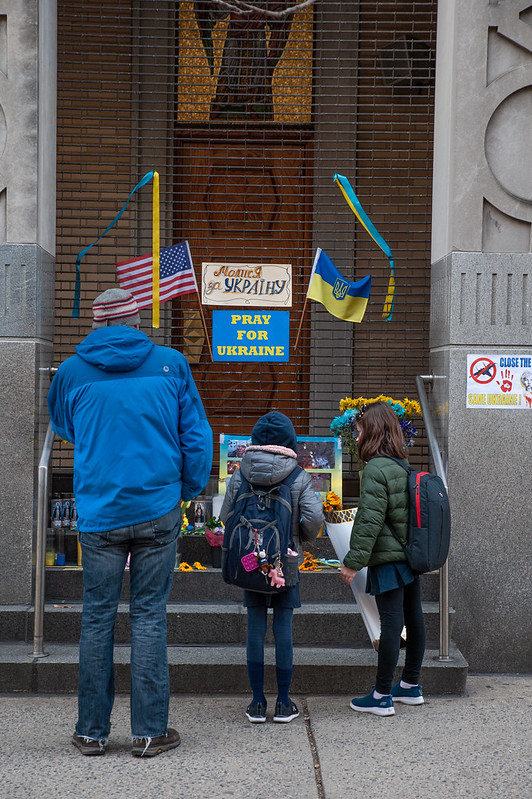 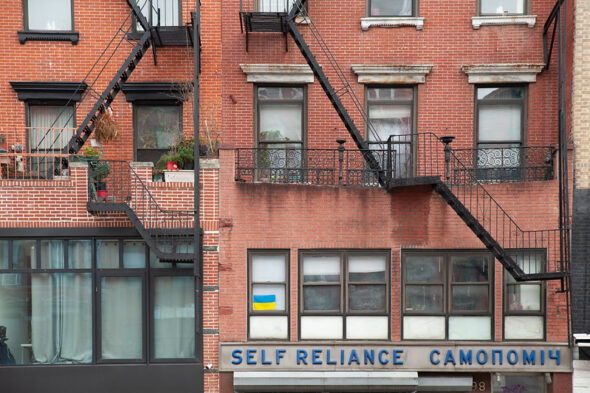 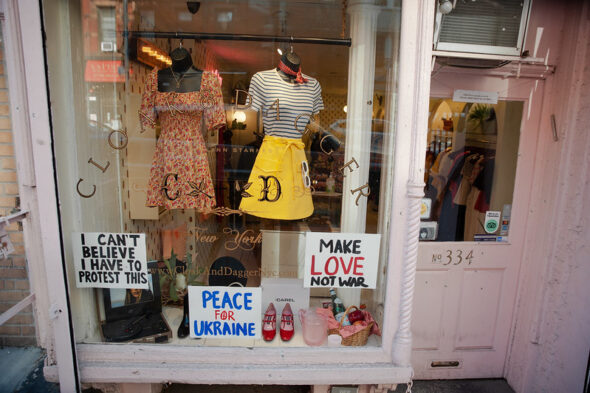 Posters with signs supporting Ukraine in the display of a vintage clothing store in Ukrainian East Village. “We love Veselka down the street, and we wanted to support the Ukrainian community,” said Danielle Santa-Cruz, 23, a saleswoman in the shop. March 5, 2022. Photo by Nikol Mudrová 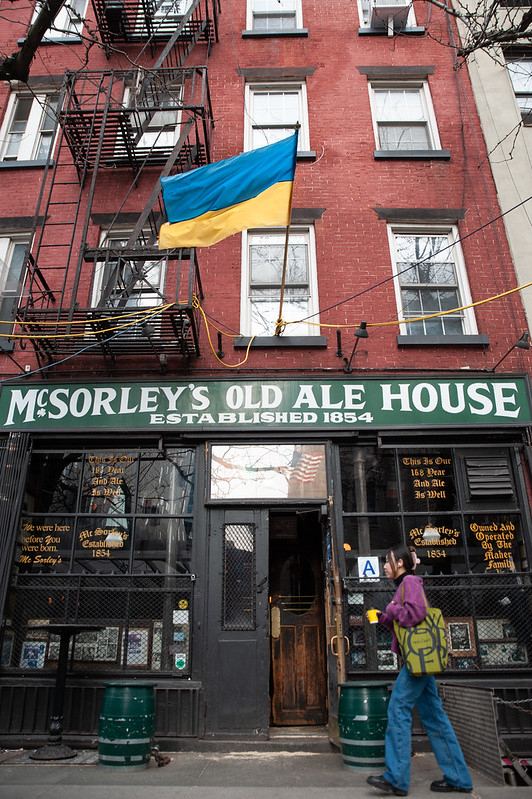