Entwined in a four-foot-high pile of trash facing the Upper East Side sat a deformed delivery box with undeterminable stains, gaping holes, and an Amazon logo frowning at Long Island City.

After only three months, Amazon backed out of their highly-anticipated deal to build a new headquarters, dubbed HQ2, in Long Island City. While many are crediting local politicians for the company’s decision, it was the blue-collar New Yorkers who joined calloused hands and tired voices to put a pause on the sweep of rampant gentrification in their backyard.

During a celebratory rally today the echoes of “G-T-F-O Amazon has got to go” overtook the reverberations of luxury building construction at Gantry Plaza State Park in Queens. With Manhattan’s lights illuminating behind him, Queens Anti-Gentrification Project organizer Michael Forest congratulated fellow organizers on their success.

“It’s a cold night, but it’s a strong night because we defeated Amazon,” he said. “We’re here tonight to say smash tech capitalism and we’re going to fight back against that, not just Amazon.”

Forest explained that HQ2 would have caused significantly more harm than good to New Yorkers. Other activists and grassroots organizations felt the same.

“It would have brought a lot of high-paid tech workers into the neighborhood and it would’ve made everything go up, from rent prices to just goods, services and things like that,” he said. It generally would have been bad for everybody.”

At the rally, there were at least 10 organizations present and there have been at least two dozen organizations and hundreds of individuals attempting to drown out the noise of a multi-billion-dollar company since November.

When Amazon announced its plans Nov. 13 for the 4-million-square-foot landscape of HQ2, it promised 25,000 full-time jobs with an average wage of $150,000, a technology startup incubator, space for public school, and investments in infrastructure. Assuming the company was successful in their promises, New York politicians also offered Amazon nearly $3 billion in subsidies, a move that only intensified activists’ fight against the deal.

There have been more than a dozen protests and rallies since the deal was announced with hundreds of New Yorkers flocking from one demonstration to the next. Elmhurst resident James Mongeluzo, 30, explained that although Amazon’s promises were filled with vague statements, they were also filled with the fuel he and others needed to have their concerns heard. He has attended numerous events over the past few months to share as much information as he can about the fine print of Amazon’s deal. 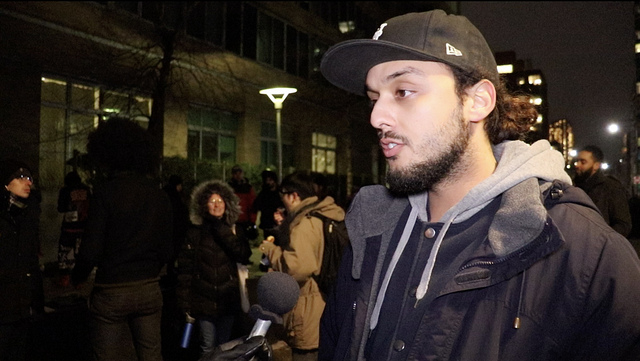 James Mongeluzo, 30, has spent his entire life in New York and wants Amazon and other large companies to know that despite their promises, they will not be welcomed to New York City unless they provide opportunities for working class residents. Photo by Maggie Garred.

“They say the jobs were going to be an average of $150,000. That seems like it could be true, but average is not really a meaningful number. You really need the median, you need to know what the mode is,” he explained. “How many people are getting the jobs at the $30,000 level? How many are getting it at the $2 million level? If you just have a few people making millions that can skew the average heavily.”

Despite the company’s statement that 70 percent of New Yorker’s approved of their plans, these numbers, as well as the vast housing issues, such as the lack of affordability and regulation and increasing homelessness, only watered the growing contempt for Amazon’s deal.

“I don’t meet many people that believe that poll,” Forest said. “Most people I talk to say they oppose it. If that was truly the poll numbers then I don’t think they would have pulled out.”

The poll cited in Amazon’s statement was conducted by Siena College Research Institute. Despite there being more than 4.6 million active registered voters in New York City alone, the poll was only conducted in English to 778 registered voters in the entire state with the sampling limited to the youngest male in the house. 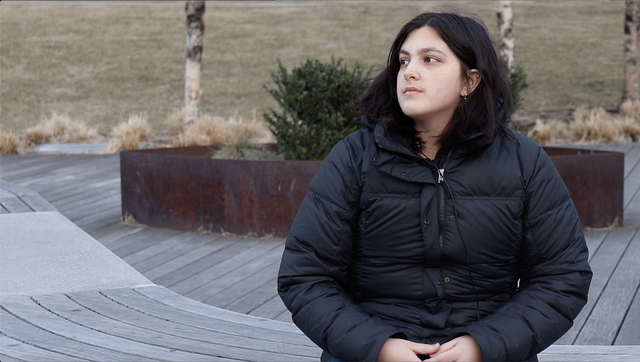 Sabrina Rich, 21, senior at The City University of New York, is part of a student-run organizations that has tirelessly fought against Amazon’s deal with New York City since it was announced last November. Photo by Maggie Garrad.

Middle Village resident Sabrina Rich, 21, a senior sociology and political science major at the City University of New York, said there was nothing that could have changed her mind about the deal.

“I don’t think big companies as big as Amazon with CEOs as rich as Jeff Bezos should exist in the first place,” she said. “We should be having adequate schools and things without Amazon coming here. That should be coming from the government.”

Rich and other activists have marched into the Amazon bookstore on 34th Street. They have dropped banners and provided testimony at city council meetings. They have created pamphlets, websites and ads. Now, they say, they will continue their fight onto other deals gone bad in New York City. Next on their list is fighting rezoning plans in Sunnyside and Willets Point that would allow luxury apartments to be built in working class communities.

“We called out attention to [Amazon’s] ICE partnership, the way they treat their workers. Amazon cares a lot about their image and I think it was the organizers who were doing that work and putting it out there,” Rich said. “I think that people are really starting to see the power of the people and what happens when people from across communities come together to fight something.”