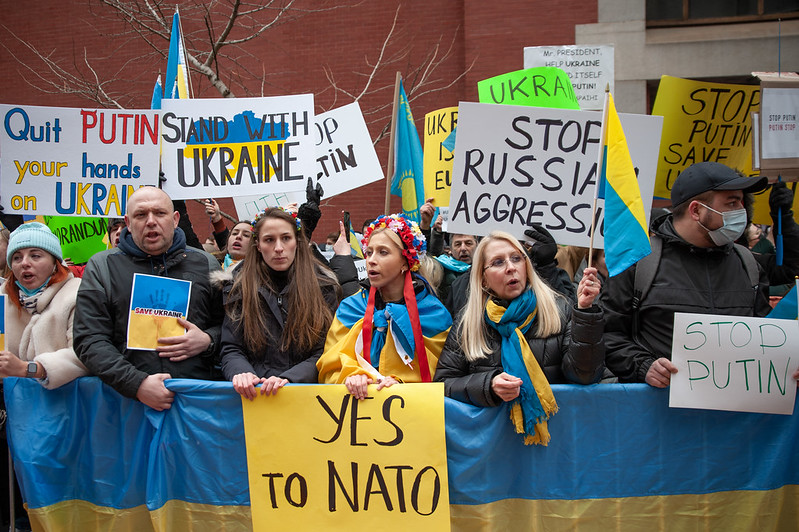 People protesting against the Russian invasion of Ukraine in front of the Russian Permanent Mission in midtown. February 24, 2022. Photo by Nikol Mudrová

“No War in Ukraine”

These were just a few of the slogans hoisted and chanted on the streets of Manhattan this afternoon.

Hundreds of New Yorkers, some born in Ukraine, Latvia, Kazakhstan, and even Russia, gathered to support Ukraine after the Russian invasion today. From Times Square, they marched to the Russian Permanent Mission at East 67th St, then back to the UN Headquarters. Another rally occurred near the Russian Consulate at 91st street.

“I have family back in Ukraine, and they’re hiding in bunkers,” Ivanna Sakhno, a 24-year-old actress from Ukraine with short blond hair and a Ukrainian flag painted on her right cheek, said, as she stood in the United Nations Plaza. 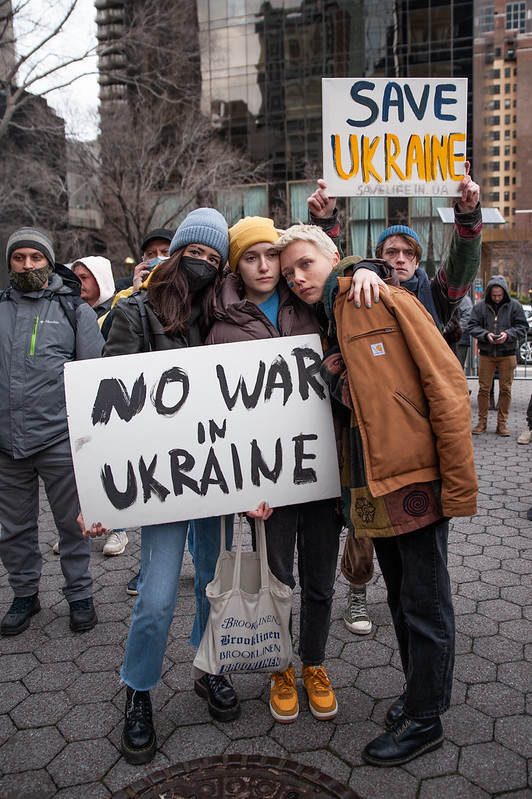 Ivanna Sakhno, a 24-year-old actress from Ukraine and her friends voicing support for her country at  the United Nations Plaza. February 24, 2022. Photo by Nikol Mudrová

Sakhno said that she currently can’t get in touch with her father.

“He is trying to help those in need, so he is driving kids of soldiers to the western side of Ukraine,” she said fighting back tears.

“Right now, the most important thing is to keep our head cold, heart warm, and do what’s best for Ukraine, which is to support Ukrainian Armed Forces, donate, spread the word, and demand help for Ukraine by calling your government officials.”

Friends who came to the protest with her, hugged her after she spoke.

Arthur Zgurov, a doctor from Odessa, Ukraine, is  determinated to help his home country too. He led the march with a megaphone, shouting, “Stop Putin now.”

“How can you feel when your country is invaded.You have two options, Either you panic, or you take all your inner reserves and stand up for your country,” he said.

Zugurov said that Ukrainians decided to stand up and he doesn’t plan to give up hope. He is convinced that he’ll continue to speak up and support Ukraine.

Since the Russian military pushed into Ukraine by land, sea, and air on Thursday night, the situation has been changing every minute.

More than 100 Ukrainian soldiers and civilians have been killed as Russian troops moved toward several Ukrainian cities, including the capital Kyiv or Kharkiv, and took control of Chernobyl’s facility.

So far, the ultimate goal of Russia’s President Vladimir Putin remains unclear. In a video, Ukrainian President Volodymyr Zelensky said that Russian saboteurs had entered Kyiv and that he was “target No. 1” for Moscow.

That is also why participants of the protest voiced their message to the President Joe Biden and the United Nations to impose severe sanctions on Russia.

Tanya Nosal, an immigrant to New York from western Ukraine, said that Ukraine turned over thousands of nuclear weapons in exchange for security guarantees from Russia and the US when the Soviet Union collapsed in 1991.

“Russia and the United States promised us that if we gave up our nuclear weapons, they will protect us. So now we hope the US will help us in the fight against Russia,” Nosal said.

In response to the invasion Biden unveiled a new set of measures targeting the Russian economy which include export blocks on technology, sanctions on Russian banks, and “corrupt billionaires” close to the Kremlin and their families.

While Biden refused to answer why Putin himself hasn’t been directly sanctioned yet, people protesting on the streets of New York were sure that Putin is to blame. And there were even Russians among them.

“I feel shame for my country and for what our government is doing,” Dimitrii Annekov, a data analyst from Moscow, now living in New York, said. To him, Putin is unstoppable.

“We’ve created a monster, and I’m deeply sorry. I’m ashamed for my country,” she said and added, “Please, help Ukraine.” 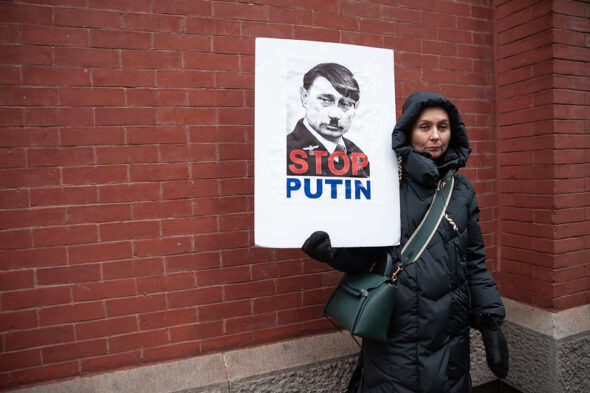 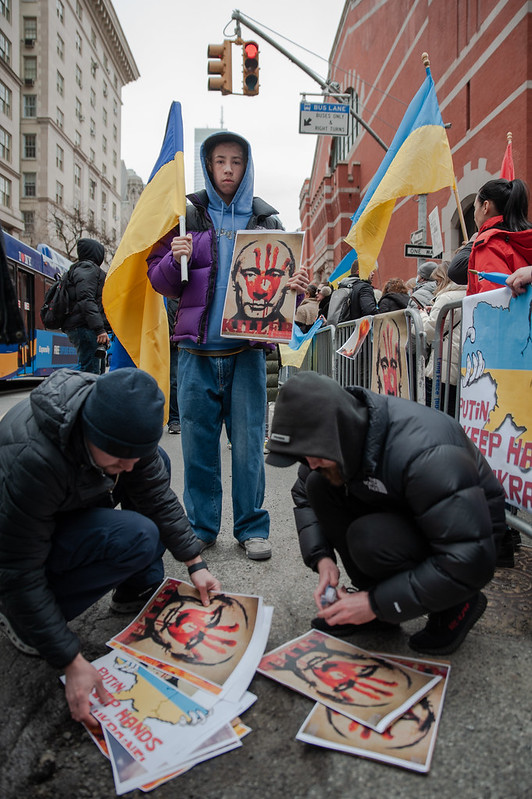 Supporters of Ukraine give out posters with Putin’s portrait with a blooded hand over his face to participants of the protest in front of the Russian Permanent Mission in midtown. February 24, 2022. Photo by Nikol Mudrová 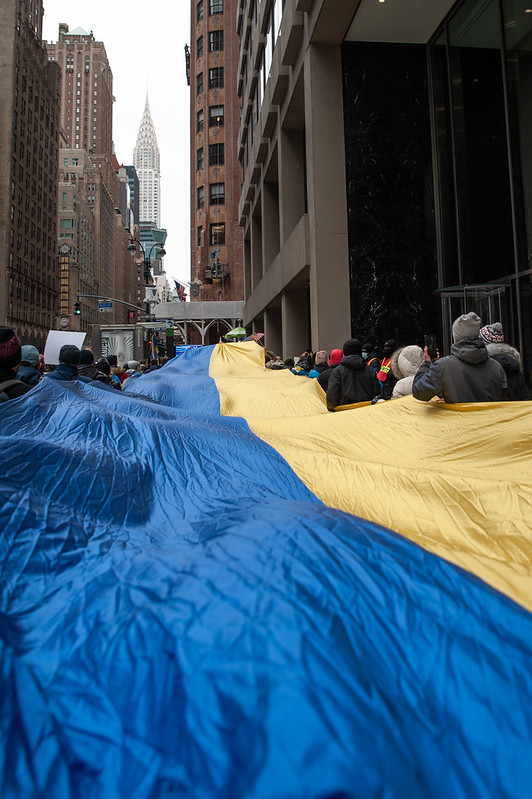 Supporters of Ukraine heading down through Lexington Avenue, from the Russian Permanent Mission in midtown to the UN Headquarters. February 24, 2022. Photo by Nikol Mudrová 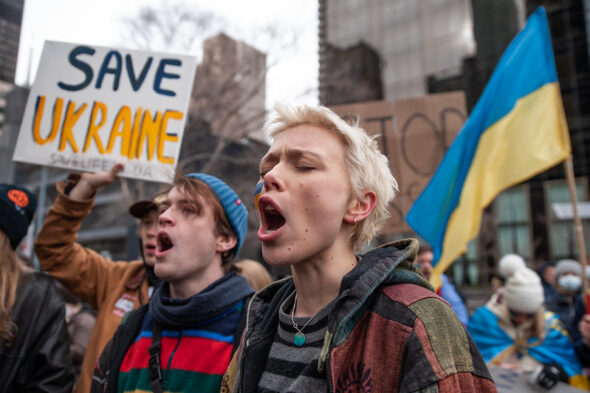 Ivanna Sakhno, a 24-year-old actress from Ukraine and her friends voicing support for her country from the UN Headquarters Plaza. “I have family back in Ukraine, and they’re hiding in bunkers,” she said. February 24, 2022. Photo by Nikol Mudrová 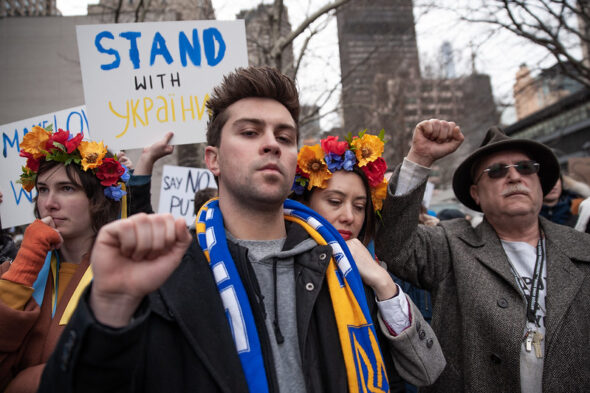 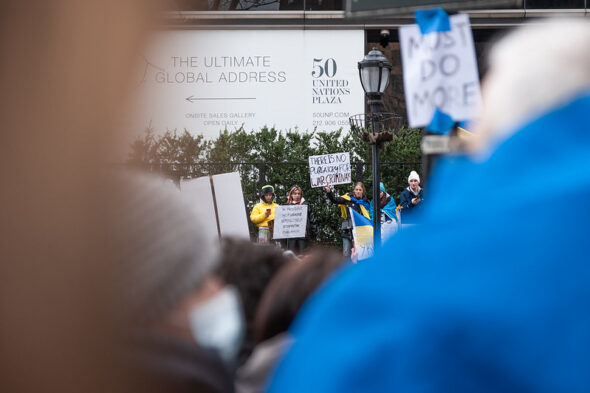