No Gluts, No Glory 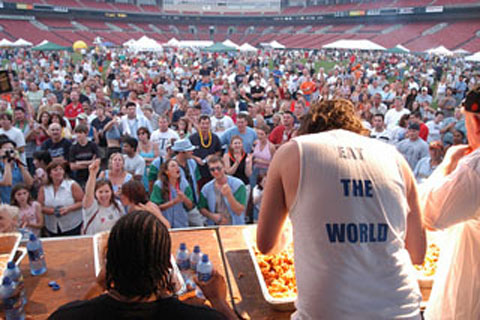 The crowd pushes forward, sweaty and anxious to get a closer look. Waving American flags, they crane their necks to see the action onstage: men and women of all sizes and ethnicities waiting patiently in the July sun, running through plans of attack in their minds.

As the countdown begins, these contestants prepare to dip doughy buns into the paper water glasses in front of them, frantically cramming bits of hot dogs into their cheeks like squirrels preparing for harvest. For competitive eaters of all ages, the Nathan’s Famous Hot Dog Contest is the reason they have dedicated months to perfecting how to consume 3 pounds of pancakes in one sitting, and 50 grilled cheese sandwiches in 10 minutes. The time has come — they have arrived.

For many who are members of this competitive eating world, it is about more than just breaking records and eating to the point of nausea. Competitive eating is an art, and a craft that pushes all involved to constantly improve themselves and move one bite closer to victory.

“It’s a sport, but rooted in lighthearted fun, good times,” said Richard Shea, who has been hosting and promoting competitive eating events for the past 12 years, along with his brother and business partner Greg.

The Shea brothers are responsible for helping elevate speed eating to a level of athleticism, beginning first at their public relations firm over a decade ago, where Nathan’s Famous Hot Dogs was one of their clients. The Nathan’s Famous Fourth of July International Hot Dog Eating contest has occurred every summer since 1916, where competitors fight for the Mustard Yellow Belt by stuffing in as many frankfurters as they can in 12 minutes. 2008 winner Joey Chestnut swallowed 59 with matching buns.

“We got a big kick out of it, and talked about expanding it beyond Coney Island,” said Shea.

The Sheas first founded the International Federation of Competitive Eaters in 1997, and later Major League Eating (MLE), a league for competitive eaters. These are organizations that take eating to an entirely new level, and regard it with almost religious esteem.

MLE manages their sanctioned competitive eaters, who are able to compete in various sponsored speed-eating challenges around the globe. The competitions range from the historic Nathan’s Famous hot dogs event in Coney Island, N.Y., to the deep-fried asparagus contest in Stockton, Cali., where competitors celebrate the locally grown vegetable every spring. Eater Joey Chestnut won in 2008 by eating 8.8 pounds. Eating events, much like the eaters themselves, are diverse, and a serious eater can find himself headed as far as England for a mince meat contest, or to Japan for chicken satay.

“It’s a strange journey, much like Jack Kerouac and the beatniks,” said Crazy Legs Conti, a competitive eater from New York City. “We started out for the love of the sport.”

And from that love has spun an experience far larger than many eaters had ever imagined. In New Orleans for the 2002 Super Bowl, Conti, 38, coincidentally found himself over at the Acme Oyster House at the same time the restaurant was hosting its annual speed eating contest. He ended up putting down 34 dozen oysters in one sitting, which Conti said put him on the map.

“I was always a fan,” he said, now on the MLE circuit for seven years. “Competitive eating has allowed me to go on the road — it allows me to indulge more than the casual tourist.”

Andrew “Skinnyboy” Lane, a software developer and competitive eater from Denver, said competitive eating is a crazy ride that’s left him captivated since his first grilled cheese contest back in Colorado.

“I’ve been all over the U.S. — burritos in Maine, PB&J in California, blueberry pie in Oregon. It’s fun traveling and it’s quite a conversation-starter,” said Lane, who’s been on the circuit since 2005. “And it’s neat seeing others you know at all kinds of weird places doing this.”

Ryan Nerz, author of “Eat This Book,” which depicts life on the competitive eating circuit, explained that the world of competitive eating takes normal or semi-normal people with a penchant for eating quickly and transforms them into characters.

“Someone goes from being a mail carrier or subway conductor to this larger-than-life character,” Nerz said. “Their identity becomes that of a gurgitator.”

Nerz, 35, has been a media manager and emcee for MLE since 2003, after hosting a meat pie eating contest in Louisiana that left him hooked on this unique sport. He has tried to join competitions from the other side of the plate, but learned that he simply eats too slowly. In fact, he said that is how many pros fell into this rare community — having grown up as kids who ate quickly, competing with siblings for the last dinner roll.

For many, competitive eating remains a side job to other careers. Takeru Kobayashi, a Japanese eater whose resume includes having won Nathan’s hot dog contest six consecutive years, is the only full-time professional eater who makes an income from his event winnings. Many events award prize money in the thousands, and some even give away material items, like a car at the Philadelphia Wing Bowl. Others participate purely for the rush of competing, as well as the camaraderie associated with this eating network.

“We have more active eaters than others. Some do a couple dozen a year, some are hobbyists who only do six to eight,” said Richard Shea, noting their competition season as being spring through fall.

There’s no easy contest or simple food to ingest quickly, as each are difficult in their own way, said Nerz. Corn is tricky because of technique; hot dogs are tough for stomach capacity. Each competition requires diligence, confidence, and an unshakable focus.

“As an athlete, you run into foods that get the best of you,” said Crazy Legs Conti, citing corned beef as his own pitfall.

And if professional eating is, in fact, a sport, the need for training seems obvious. The world of competitive eating has evolved from a silly display of chewing power to rile up crowds, to a more serious competition that demands concentration and practice.

“In the old era, we used to eat steak and go to the bars,” said Conti about his training regimen before events. “Now, it’s Japanese Ramen soup, and party after. It’s a lot of prep.”

Preparations even include doing practice runs before matches, such as grilling up versions of the event’s featured food as similarly as possible in order to test consumption. Conti also mentioned that his roommate Tim Janus, also known as Eater X, consults a sports psychologist before some events.

“Each food item can be unique and have a not-so-good, a good, and a best way to get it down in competition,” said Andrew “Skinnyboy” Lane.

As manager, however, Shea said that individual training is actually not encouraged.

“We are against home training at all because we can’t guarantee the safety,” he said.

Shea also admitted that EMTs are present at all Major League Eating-sponsored events for that reason. There have even been a number of deaths related to competitive eating — eight since 2000 — almost all occurring outside of the United States. A man choked to death in Russia in March 2009 while claiming his prize onstage for a pancake eating event, and in Taiwan in 2008, another man died after winning a steamed bun contest.

According to Ryan Nerz, competitive eating still remains athletic at its core, and therefore is dominated by mostly healthy people.

Crazy Legs Conti, who is 6 foot 3 inches and 120 pounds, said staying in shape for competitive eaters is all about balancing a healthy lifestyle. An avid runner himself, he ran the Boston Marathon the day after swallowing 25 frankfurters in 13 minutes at the Nathan’s Famous hot dog qualifying contest in 2007.

“I have found that 21.5 is the wall in both hot dogs and jogging mileage,” he said.

No longer a sport veiled in complete mystery, MLE has hosted a number of events that have been spotlighted on TV networks such as the Discovery Channel and ESPN. There is now even a competitive eating video game for Nintendo Wii, in which the characters are based on real eaters, like Conti.

“We have a solid sense of humor about it. … It’s a microcosm, our own little world,” said Ryan Nerz. “Sort of a mix between sport and magic act.”