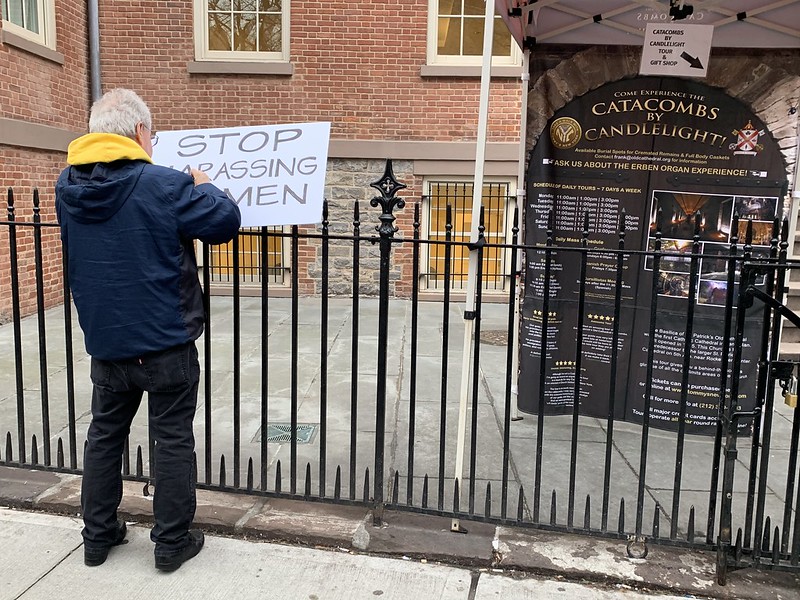 Bob Brenner, 67, a first time demonstrator arrives to the Abortion Rights Protest and finishes coloring in his poster before joining the group. By: Jonathan Sarabia

Pro-choice activists targeted a tour company yesterday. They held signs and chanted “Not the church, not the state, woman must decide their faith.”

The goal was to stop Tommy Tours from working with the Basilica of St. Patrick’s Old Cathedral in Nolita, a church that holds a monthly “witness for life” mass followed by a march to a nearby Planned Parenthood where they sing and pray against abortion.

Bob Brenner, 67, a first time demonstrator was one of the first to arrive at the scene. He took out his black marker and finished coloring in his poster stating, “Stop harassing women.”

Brenner became aware of the protest through a facebook post created by NYC Abortion Rights who sponsored the protest. “Nobody is forcing anyone to get an abortion,” he said. “That should be between a woman and her doctor. The government should not be budding into that.”

Brenner said that it’s all about power and controlling woman for conservative groups. He shared how a relative had an abortion back in 1940. He recalled coming across a book displaying photographs of dead woman who had an abortion in a basement. 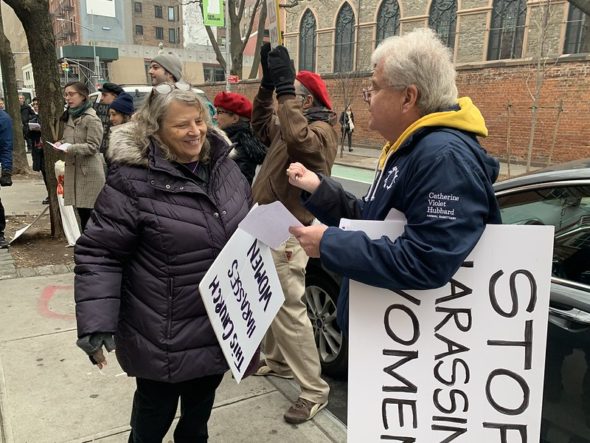 Celia Petty, 70, a founding member of the organization walked around asking passerby to join NYC Abortion Rights mailing list. With a small piece of paper, she collected names and emails, including Brenner’s.

She held her poster stating, “This church harasses women.” A fellow protestor  asked Petty to remind him of her chant.

“Hey Tommy’s what the hey, tell the church to go away.” chanted Petty.

Petty was a Pro choice activist in 1968 through 1980. In 2016, the election of President Trump and the Women’s March brought her back into her activist roots.

“I am shocked and horrified that we are still arguing about something that we fought and won 50 years ago,” said Petty. “Abortion is critical and absolutley fundamental for woman to fully participate in public life of all kinds and be able to control their lifes.”

Tommy’s Tours, a New York City tour company, became the tour company and partner of The Basilica of St. Patrick’s Old Cathedral. Their exclusive tour, Catacombs by Candlelight tours has access to areas in the Basilica that is considered to be off-limits as well as the catacombs. This tour agreement provided a source of revenue for the Basilica.

In a NYC For Abortion Rights protest handout, the organization said Tommy’s Tours should not be “supporting and making money off a church that harasses women trying to get healthcare.”

The group wants passersby and potential customers to request a refund for the Catacomb tour, and call  church and the tour company to complain. 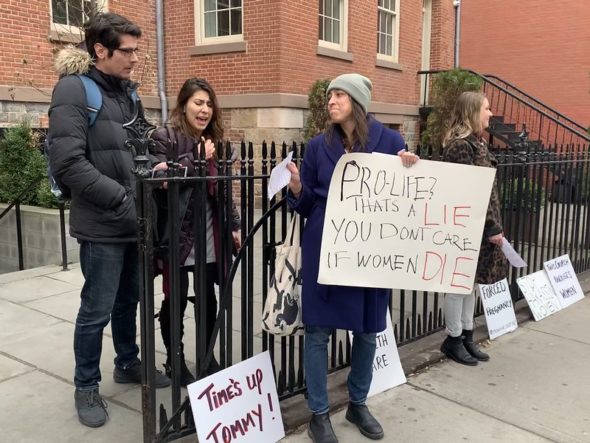 Anti-abortion demonstrators, Karina Momge, 32, and Maxim Nelson, 33 stood from the inside gate of Tommy’s Tours. Sharing headphones they sang the song Tremble by Mosaic MSC during the Abortion Rights protest.  Photo By Jonathan Sarabia

But two anti-abortion activists stood from the inside gate of Tommy’s Tours to support the church.

Karina Momge, 32, and Maxim Nelson, 33 shared headphones and sang the song Tremble by Mosaic MSC, a , a worship song by a Los Angeles Christian music group.

“It just came to mind,” said Momge. “It says, Breathe call these bones to live, call these lungs to sing. I was singing on behalf on the babies. I believe God brings life to the bones and the lungs.”

They said they were not connected to the church, but happened to be passing by. Both Momge and Nelson identified as Christians.

“I have many friends that have gone through abortion,” said Momge. “They dream about their babies, they have extreme traumatic stress disorder.”