Eileen and Emily harvest microgreens as they talked to their English teacher Oliver Eduardo, who founded the gardening club. March 10, 2022. Photo by Nikol Mudrová

On a Thursday in March, Kier Blake headed to the Celia Cruz Bronx High School of Music to check out a gardening club for the first time since covid restrictions were finally lifted. The club takes place in a Spanish classroom that doubles as a greenhouse with dozens of plants and gardening tools sitting on the windowsills. A big rectangular tent in a corner contains lights and pots with various small plants called microgreens.

Oliver Eduardo, a teacher who started the after-school club last year watched as two students, Eileen and Emily, harvested lettuce and red cabbage, putting the leaves into a plastic bag to take home. 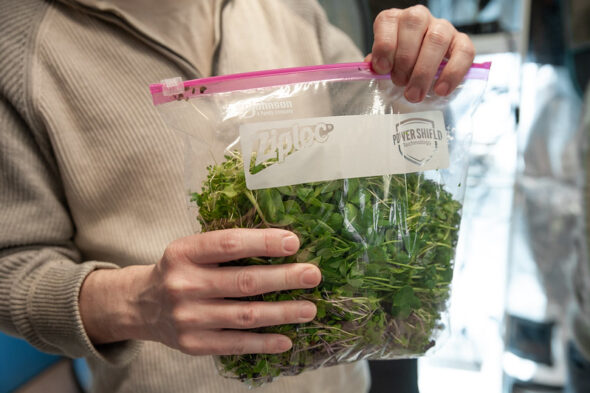 Emily, a 16-year-old junior, signed up for the club to grow flowers, not lettuce. “This is much better. I can actually eat what I produce. It’s so yummy in a salad,” she said.

Blake (who uses they/them) and their friend Alexia Leclercq cofounded the nonprofit Start: Empowerment that funds the gardening club with the goal of educating students about climate and food justice.

The non-profit contributes to the $5,000 budget for the program mainly used to cover the extra hours that two teachers, Eduardo, and his colleague Xiomara De Los Santos, must stay at work to supervise 20 students two times per week.

Los Santos teaches Spanish; however, her hobby is growing her plants at home hydroponically because it’s more convenient and it saves water. That’s why Eduardo asked for her help when a student approached him last year with a wish to organize a club where she could learn how to use the hydroponic system. 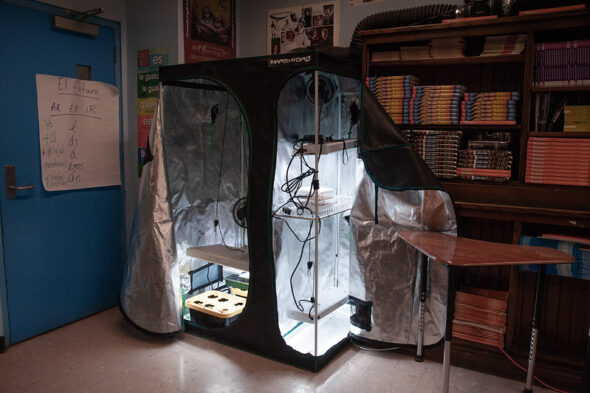 Tent for hydroponic method of growing microgreens at the Spanish classroom on second floor of The Cecilia Cruz Bronx High School of Music. March 10, 2022. Photo by Nikol Mudrová

“We use coco coir, which is a more nutritious type of soil. Containers are in a puddle, so there’s no need to pump in more water. It grows so quickly with this method!” Los Santos said as she was observing two other students as they were putting the coco coir in the pots so they can place it in the tent later. Then, microgreens grow under the lights in the tent for about ten days before they can be harvested and then distributed to students and some staff members.

Blake has stopped in this late March afternoon to discuss expanding the club with the school’s administrator Vern Ram. While the kids were wrapping up, cleaning, and sweeping the classroom, Ram and Blake chatted about producing more greens as one way to tackle the food insecurity of the Bronx’s community. Described as a “food desert,” the borough has one of the highest food insecurity rates in the country, according to the Hunger Free America report.

He hopes to help realize Start:Empowerment’s goal to provide regular packages with vegetables for students from low-income families and even produce enough microgreens for the school’s cafeteria. “It would be healthier, and I think that folks eating it would appreciate the hard work of their classmates,” said Ram, who sees the school rooftop as one of the potential places to expand the gardening project.

Funding is needed for a bigger space and Blake told the students to collect and keep track of data about their program as that can be used for future proposals. “These are tedious stuff, and I don’t like it either, but that’s how we get funding,” Blake said and explained that if they can go to a foundation with data showing what they can grow with $5,000, they could request more financial support for potentially even doubling the program.

So far, Start:Empowerment has consistently partnered with two New York City public schools and one private school with plans to expand to ten schools over the next two years. Its activities are divided between organizing climate-based after-school programming like the gardening club and incorporating climate curriculum into classes. Though the work is shared, Blake manages the fieldwork and cooperation with educators while the curriculum is created by Leclercq, a self-described “nerd, who enjoys sitting in a corner writing things.” 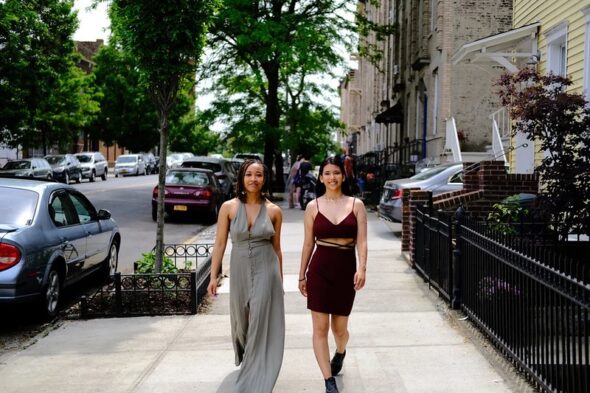 The non-profit started almost three years ago when Leclercq and Blake were both NYU students. Leclercq complained to a school counselor friend that she wished she knew as much about climate justice in high school as she learned in college. The friend encouraged the pair to put together a project as a part of an environmental science class at her school (which happens to be in the same building as Celia Cruz).

They applied and received funding from the NYU’s green grant to write an intro curriculum. Then through interactive activities, field trips, or school garden, they introduced students to the basics of environmental justice, local politics, and land use. Leclercq noticed that students already knew a lot about climate injustice, not necessarily the terminology, but its effects like asthma, that is a big issue in the area too.

After this first experience, they updated the curriculum to make applying Start:Empowerment’s lesson plans even easier. The new version offers a broad-based approach to climate justice with fewer details, so it’s less overwhelming. It allows educators to pick and choose elements they want – from activities to story maps and PowerPoint presentations no matter whether they are teaching social studies, English, math, or science.

They also want to nudge students to be in charge more. That’s why they’re exploring the possibility of selecting few students from the Celia Cruz gardening club to take care of the microgreens during summer break. “Our purpose is not to have people relying on us, but to give them back their agency,” said Blake.