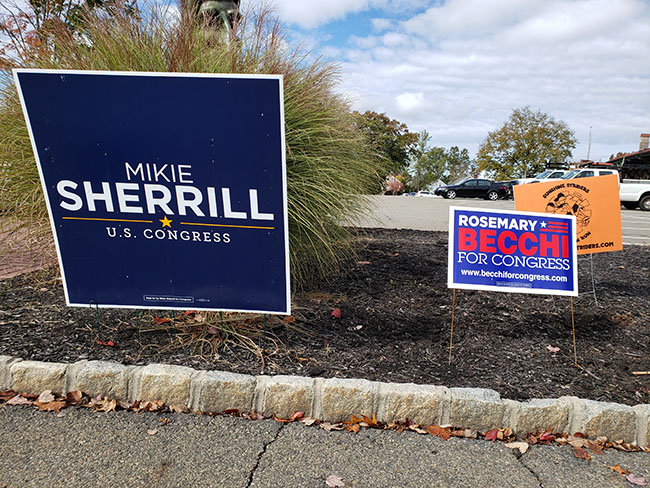 Local campaign signs are popping up around the region. Photo by Michael Lovito

Republicans used to be able to count on Morris County. No matter how Democratic the rest of New Jersey became, this collection of wealthy suburbs in the northern part of the state rarely wavered, giving the majority of its votes to Democratic presidential candidates only twice since 1896, and continually electing Republicans to Congress and state and local offices.

And then the Blue Wave came crashing. In the 2018 mid-term elections both of the county’s congressional districts – New Jersey’s 7th and 11th – elected Democrats for the first time since the early 1980s. This followed a trend found in many American suburban districts, where a new crop of candidates energized by their opposition to President Donald Trump sent longtime Republican incumbents packing.

Len Resto was one of the Blue Wave’s casualties. A Republican member of the Chatham Borough Council, he and his running mate, Peter Hoffman, narrowly lost re-election to the Democratic ticket in 2018. He eventually found his way back to the Council when he was appointed to fill a vacant seat – only this time, he decided to serve as a Democrat.

“I’ve always been a very middle of the road person, a moderate. And the Republican Party to me was just lurching so far to the right that it was falling off a cliff,” Resto told me over the phone about his switch in party. He’s running for election again this year, his first time doing so as a Democrat, and is optimistic that his “boringly in the middle” will help he and his running mate, Frank Truilo, defeat Republican candidate Bob Weber. “People in Chatham, I think, are very moderate, they’re middle of the road, they want to see things getting done. They want to see harmony. And, you know, I’ve kind of been someone that offers that. I try to work with everybody.”

This isn’t the first time Resto has switched parties. He’d been a lifelong Democrat until the early 2000s, when he became the campaign treasurer for Andy Copp, a Republican candidate for Borough Council. He also supported former Republican New Jersey governors Tom Kean and Christine Todd Whitman (who gave a brief statement endorsing former Vice President Joe Biden at the Democratic National Convention in August), two figures who Resto argues represent a version of Republicanism that’s been abandoned by the modern party. “The moderate Republicans believed in old fashioned conservative values. They believed in fiscal conservatism, or fiscal sanity, and we have got a deficit that is in the trillions that your grandchildren will still be paying off,” said Resto. “Under Trump, it’s gone just totally off a cliff, and we keep cutting taxes. But the relief doesn’t seem to filter down to the middle class and those at the bottom rung of the ladder.”

Traditionally, the prospect of lower taxes helped persuade voters in affluent suburban districts to vote for Republicans. But the 2017 Tax Cuts and Jobs Act – which was passed by a Republican controlled Congress and signed into law by President Trump — placed a $10,000 cap on state and local tax (abbreviated as SALT) deductions. This effectively raised taxes on residents in wealthy communities in states like New Jersey, New York, and California, which have high state and property taxes. Democrats in these regions ran in opposition to the SALT cap in the 2018 midterms, helping them win seats in wealthy areas like New Jersey’s 11th Congressional District, where Chatham Borough and the majority of Morris County is located.

Two years ago, Congresswoman Mikie Sherrill, a former federal prosecutor and Navy helicopter pilot, became the first Democrat to win the 11th district since 1984. “I think I was able to flip the district because what people want here in New Jersey is efficient government,” she told me over the phone. “People here are overtaxed. So, they want to make sure that if they’re paying money to the US government that the money is being wisely spent. And I think they also want to see a return on that investment.”

During her first term in Congress, Sherrill introduced bipartisan legislation that would raise the SALT cap and pursued funding for local infrastructure projects like the Gateway Tunnel project, which would improve rail access in New Jersey. She’s confident that her advocacy for her constituents’ interests, as well as her moderate policy positions, will help her stay employed through at least 2023. “I think the district was ready for someone who was going to really push hard to put the interests of the district before any partisan politics and really focus on the needs of the district,” Sherrill said. “And I think the reason I’ll be able to hold the district is because I’ve done just that in Congress. I haven’t focused on partisan political issues, but rather I focused on what was going to best serve North Jersey and the country.”

Another reason why Sherrill may hold the district? Rosemary Becchi, her Republican opponent, lobbied on behalf of the National Alliance of Forest Owners for the very same tax bill that lowered the SALT cap. While Becchi has pointed out that she only lobbied for the portion of the bill that lowered taxes for her client and not the SALT cap, such a distinction may not make a difference come Election Day. Election forecasters like FiveThirtyEight and Real Clear Politics currently have the 11th District race pegged as a likely Democratic win.

Tax policy, bipartisanship, and advocacy for local issues are all fine reasons to vote for a candidate, and they certainly may have played a role in sending Sherrill and other Democratic freshmen to Capitol Hill. But aren’t we ignoring the awkwardly coiffed elephant in the room?

“Donald Trump has been one of the biggest gifts and he just keeps on giving,” said Rupande Mehta, the Democratic candidate for the state senate in New Jersey’s 25th Legislative District, which also covers Morris County and shares territory with the 11th Congressional District. “I mean, he’s in the news every day for all the wrong reasons, right? People are craving normalcy at this point.”

Mehta, who is currently working as a manager of strategic sourcing at Prudential Financial, is running to flip a seat that’s been held by Republicans since 1998 and thinks disgust for Trump and changing demographics are her key to victory. “We have working families coming into the district and changing the entire demographic. And that’s where this momentum for my race is coming from.”

In 2018, Mehta narrowly lost a race for the Morris County Board of Chosen Freeholders, a five-person governing body that’s only had one Democratic member in the last 40 years. Her loss highlights a concurrent, almost paradoxical trend in New Jersey’s Blue Wave. While Morris County Democrats have made gains at the federal level and in municipal governments, they’ve yet to break through at the state and county level.

Resto thinks that inertia is simply the result of ignorance. “I think a lot of people don’t even understand what a freeholder does,” Resto said. “So, they’ll vote for a name that they just happen to recognize.” (Freeholders, for the record, act as New Jersey’s version of county legislators; they’re largely responsible for managing a county’s budget). He also said the groundswell of newly engaged Democrats at the local level could quickly change things, however. “I think that the Democratic Party hasn’t put up as good candidates as they possibly could have. But I think what’s happening is as local races like those in Chatham Borough, Chatham Township, and other places start to turn more and more Democratic, you’re going to have a pool of candidates that will make races more competitive.”

Mehta, who also lost a race for a seat on the Denville Township Council in 2017, certainly doesn’t have name recognition on her side. Her opponent, incumbent state Senator Anthony M. Bucco, was appointed to office in 2019 to replace his late father, Anthony R. Bucco. Before Anthony R.’s death, the two Buccos served concurrently – father in the Senate, son in the General Assembly – for nine years. At least one Anthony Bucco has represented the 25th Legislative District in the New Jersey Legislature since 1995, when Anthony R. was first sworn in as an assemblyman.

Still, Mehta is hopeful that the wave of female support that swept candidates like Sherrill into office two years ago will help her overcome the inherent disadvantages that come with running against a decades-long political dynasty. “My biggest support is coming from women who were energized in ’18,” Mehta said. “Women are more economically independent; more and more women are taking positions of power in society. We don’t want to be told by men what we can and cannot do, especially with our own bodies. So, I think that is sort of all fueling the fire.”

I asked Mehta why Republican attempts to tie moderate North Jersey Democrats like herself and Sherrill to left-wing Democrats like Vermont Senator Bernie Sanders and New York Congresswoman Alexandria Ocasio-Cortez haven’t been effective. “Because people are not stupid,” she said. She also said that Republicans’ reliance on such scare tactics shows how little ground they’ve already lost on issues like abortion, the environment, and the coronavirus pandemic.

“They have no record to stand on. So, the only thing they can do is caricature the whole AOC thing, and they use that against me. I mean, you look at the ads on TV, I don’t even have to see who the Democrat is that they’re running against. These are literally the same textbook ads against Democrats everywhere. People don’t fall for it.”