Across the United States right now, there are around 160 North Koreans, quietly building very different lives after fleeing a country the world looks upon as shadowy and repressive.

It’s a treacherous journey, and getting over the border is only the beginning. In China, refugees run the risk of being intercepted by human traffickers, or sent back by Chinese authorities reluctant to grant them asylum.

Those who find their way to the U.S. still have a long road ahead of them.

“The things they struggle with, most of them, they are alone in the U.S. – it might be loneliness, and they know that unless their family members come out, they will never be able to see their family,” said Hyerim Ko, U.S. Resettlement Coordinator for Liberty in North Korea, a California- based group.

Ko works directly with North Koreans arriving in the U.S. She says they keep a low profile here, fearing repercussions against the families they have left behind. It’s a threat that has become particularly daunting since Kim Jong-Un took power after his father’s death two years ago.

“He [Kim Jong-Un] has been extensively hunting down family members of defectors and expelling them from their homes,” said Ko. “They are sent to collective detention centers… it’s been reported that hundreds of households in Pyongyang have been exiled.”

Recently Pyongyang agreed to allow meetings between family members separated by the Korean War over 50 years ago. It’s a gesture that doesn’t signify any larger change in the regime, according to Ko.

“I believe there’s been reunions before,” said Ko, I don’t think this is really a softening – even if they’re softening, they’re not changing anything inside North Korea on behalf of the people,” she said.

Byong Sun Soh, President of Save North Korean Refugees, lived through the Korean War. He said the reunions are still fraught with danger for anyone who takes up the offer.

“Once they go to Pyongyang they take away their passports. You never know what will happen,” said Soh. 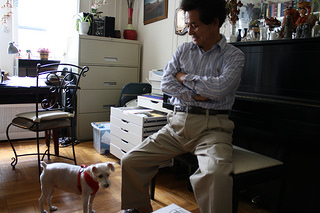 Byung Sun Soh, President of Save North Korean Refugees, with one of his dogs in his Manhattan apartment. Photo by Nidhi Prakash

While the dictatorship in North Korea is now in its third generation, Soh is optimistic that something will change eventually.

“Some day it will happen that they [the North Korean people] will all walk together and destroy [the dictatorship]… they cannot go on to a fourth, fifth, sixth generation,” he said.

Ko’s organization is intent on North Koreans driving change from within their country.

“I can’t speak on behalf of the North Korean people, because I don’t know what they want for their country, so what we’re doing is working with them so they can drive change in their country,” said Ko, “So that at the very least they will be able to meet their basic needs, and they will be able to have food and water, and have basic human rights, the ones that they don’t have now.”