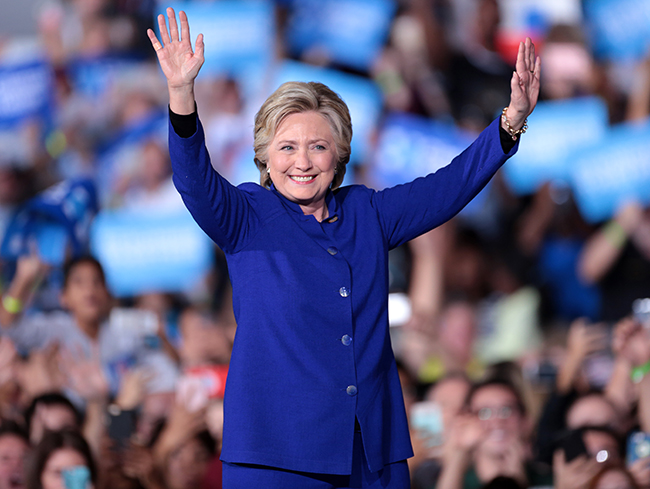 Hillary Clinton on the campaign trail. Photo courtesy of Wikipedia

Hillary Clinton is said to be contemplating another presidential run in 2020. But young women, who were a majority of her voters in 2016, are not sure if they will support her.

“She will lose again,” said Mia Flanagan, 18, who said that she had seen the news about the potential run on Twitter and had hoped it was fake. “She will obviously lose again.”

If Clinton does decide to run, 2020 would be her third presidential bid. In 2008, she campaigned against Barack Obama, losing in the primaries. In 2016, she lost in the general election to Donald Trump, despite winning the popular vote, following a campaign marred by scandals.

Many of the women spoken to said that they thought a stronger Democratic candidate would be needed in the 2020 election. It is expected that President Donald Trump will run for re-election in 2020, especially following a pledge of support from the Republican National Committee. As of now, there are no other obvious Republican candidates.

“It’ll be the same chase [as 2016] again, where we had decent candidates up against Hillary,” said Rosa Miranda, 21. “She came through – and she was not my favorite – and she came up against Trump, and Trump got her. I’d rather her not run.”

There was also a concern that Clinton would have enough support to win the primary, against candidates such as Kamala Harris, Kirsten Gillibrand, and Elizabeth Warren, but that she would again lose in the general election.

“I think if Hillary runs again, none of those other Democrats are going to be able to stand a chance,” said Miranda. “I don’t know why she keeps winning [primaries], but she’s going to, and then the Republicans are going to win again.”

Flanagan thought the opposite – that Clinton would lose in the primaries, leaving the field wide-open for another Democratic candidate.

“She’ll lose again,” said Flanagan. “Judging by her opponents in the first election and the way that all went down, it doesn’t look good for her, especially with everyone else running.”

Despite her reservations about Clinton, Flanagan was also hesitant to support any other Democratic candidate, as was her friend Maddie Janz, 18.

“I’ve heard some weird stuff about [Kamala Harris],” said Flanagan. “When she first came out about her candidacy I was like ‘Oh, this is great.’ And then I was like ‘Oh, her policies…’” Harris has caught some pushback for her record as a prosecutor, with some saying that her history doesn’t match her persona as a progressive candidate.

Janz hoped that others, including Bernie Sanders and former Vice President Joe Biden, who are expected to announce 2020 campaigns, wouldn’t run.

“That’s not happening,” said Janz, about the possibility of Biden running. “I won’t allow it. Please don’t.”

While they were hesitant about the other candidates, both Flanagan and Janz said that they would rather support them than Clinton.

“I just can’t believe that she’s willing to put herself through that again,” said Janz. “I don’t think she should run.”

Ramirez agreed. “I would rather her not run.”