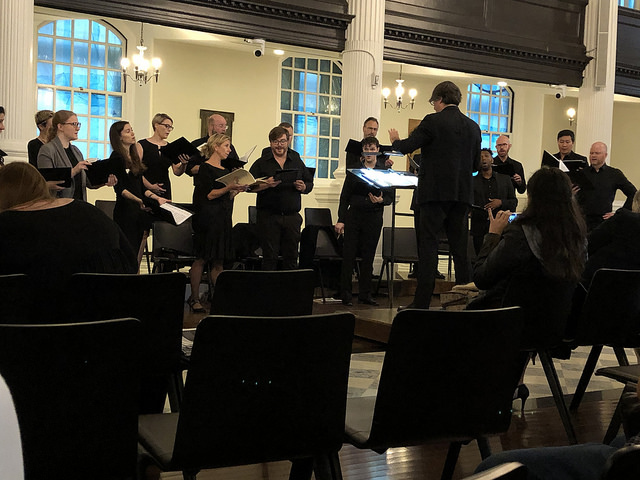 Churchgoers at St. Paul’s Chapel in Lower Manhattan were greeted by an eclectic blend of music as they entered for today’s 17th annual commemoration of September 11th. The afternoon service, the Calling of the Names, honors the first responders who gave their lives at Ground Zero. In his introduction to the event, Reverend Bruce W.B. Jenneker credited songs as the glue that held together the different stages of the service.

“Pain shared is pain halved,” he said. “And pain experienced in the context of God-given music is pain that transforms us.”

For Jenneker, music is an art that alleviates bereavement by reminding us of our solidarity and shared humanity.

To underscore this point, the Calling of the Names was punctuated by songs in a variety of different genres. The performances ranged from traditional hymns and requiems to a flute recitation of Bach, a violin-driven rendition of Danny Boy, and even a piece from contemporary Christian singer Tauren Wells.

This was certainly a welcome message for Gloria Latona, a former NYU student assistant from Lower Manhattan, who attended her third annual service at St Paul’s yesterday.

“I remember 17 years ago, I was working at 34th Street and watched one of the buildings come down,” Latona said. “It’s a horrible, horrible memory. I will never experience anything (like that) in my lifetime.”

“I did have people that I knew who died,” she added. “I still cannot believe this could happen.”

Latona enjoyed the service, extolling the beauty of the church and the ceremony. For her, the choice of music was very apropos for the occasion, though she regretted missing the performance of Danny Boy.

Reverend Elizabeth Blunt cited the importance of honoring people of all backgrounds and all beliefs, something reflected in the commingling of traditional and modern expression through the service.

After just over an hour of requiems and prayers, the main event was heralded by the sound of a bagpipe. One by one, mourners approached the podium, each reciting a portion of the names of the fallen responders.

These speakers varied widely in age, from the elderly to a young boy born after the event he helped commemorate. As some of the mourners neared the end of their segments, they singled out individuals that they had known personally, ranging from New York police and firemen to military personnel and responders from out of state. One man from Newtown, Connecticut, drew attention to a victim from the same town.

Of course, for as much as those touched by September 11th vary in background, so too do their emotional responses to the trauma. Joan Jacobs, a Red Cross volunteer from West Point, admits that for her, the events of the day are less impactful.

“I’m fine with everything,” Jacobs said. “I’m military, so everything is okay. I accepted it.”

Despite her stoicism, Jacobs also enjoyed the service, describing the remembrances as “very gratifying.”

“The music was wonderful,” Jacobs said. “I’ve worked with hospice, so the dying, they’ve all gone home.”