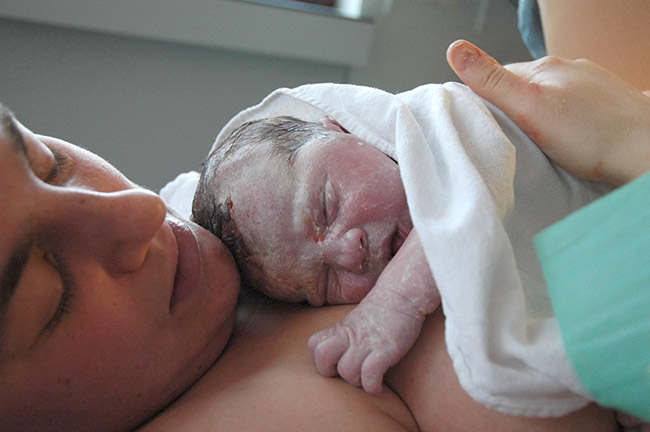 A baby on mother’s belly right after birth. Photo courtesy of Wikipedia.

“How many kids do you want, Audrey?” the surgeon asked. The question jarred her. It was something she had thought about, something she knew the answer to, but it was not a question she was expecting to be asked that day.

It was August 17, 2015, and Audrey Kingo was in the middle of what would become a more than 5-hour surgery after giving birth.

At 31-years-old, Kingo was happy, healthy and had just delivered the first of what she had hoped would be several children. She and her husband had talked about kids for years and had long known they wanted to raise at least two or three together.

Under the bright lights of the operating room, her medical team had tried hard to avoid performing a hysterectomy. But in end, Kingo was forced to make a choice that day: her life or her ability to carry children.

And Kingo is one of the lucky ones.

New York has one of the highest maternal mortality rates in the country. According to a study conducted by Merck for Mothers in 2018, the rate has increased by 60% over the past decade. But thanks to legislation recently passed by the New York State Assembly, there is hope that those numbers can change.

The bill, which is expected to be signed into law this year, will establish a Maternal Mortality Review Board that promises to “review maternal mortality and morbidity, analyze their causes and disseminate strategies for reducing the risks.”

Assemblywoman Latricia Joyner, who sponsored the bill, is largely responsible for its successful passage.

“Today we are passing legislation that will address the devastating reality that our maternal mortality rate ranks 30th in the nation,” Joyner said when she addressed the Assembly on March 28, the day the bill was voted through. “These startling statistics require our immediate attention, and today is a critical step in the right direction to ensure that women throughout our State will have confidence in our healthcare system.”

Looking back, Kingo believes she survived the birth of her son because, unlike many women, she had access to quality care.

“I delivered at NYU Langone,” she said. “Luckily, one of the top obstetric surgeons in the country was on call and was able to come in to operate. I’ve had to ask myself lots of times what would have happened if I had been somewhere else.”

In New York, there’s a disparity in maternal mortality rates when it comes to race and ethnicity. The Merck study found that, when compared to white women, black women are 12 times more likely to die during childbirth.

Rodneyse Bichotte, who represents the 42nd District of New York, also stood up to address the Assembly after the bill was passed.

“I cannot express how important this is to me,” Bichotte said. “Because on October 4th in 2016 when I was pregnant, I was rushed to New Presbyterian Columbia Hospital after realizing I was dilating. And even with emotional and excruciating pain, Columbia Hospital turned me away.”

“Because of hospital policies, they said that they had no beds,” she added. “And so, I interpreted it as you’re sending me home to die with my baby. They sent me away. Never once did I tell them that I was an elected official.”

For Bichotte, the passage of this bill means that the constituents of her district, most of whom are of Caribbean descent, will never have to go through what she went through.

“I vote in [support of] establishing cultural competent health care,” she said. “And I vote for this bill to prevent any further discrimination like how I was discriminated [against] at Columbia Hospital.”

Kingo, on the other hand, was admitted to the hospital almost immediately. Though she had planned to give birth vaginally, she was 11 days overdue and her doctors were concerned about the weight of her son. She put up a fight but was eventually convinced to have a C-section. She was holding her newborn son in her arms when she realized something was very wrong.

After giving birth Kingo experienced what is called uterine atony; her uterus did not contract and she began to bleed out. She lost three liters of blood and was several hours into surgery before she began to comprehend that her life was at risk.

She looked up at the anesthesiologist and asked, “Am I going to make it?”

The anesthesiologist told her that her vitals were good, and that she would pull through, and she did.

Now, Kingo is a member of a Facebook group that allows her to connect with and support other women who have experienced similar traumas.

“I think it’s a pretty common thing for people who have near-death experiences to want to do something that helps them find meaning,” said Kingo, who works as the deputy editor of Working Mother magazine. “I want to give back because I was lucky enough to come out on the other side.”

This year, a blessing is at hand. Kingo and her husband are expecting a baby girl who they are having through a surrogate mother. The due date is August 17—the same day her son was born and the five-year anniversary of her near-miss.

“We were so blessed to be able to find and secure a surrogate,” she said. “She’s 20 weeks now, so halfway through her pregnancy. My son will have a sister come August.”