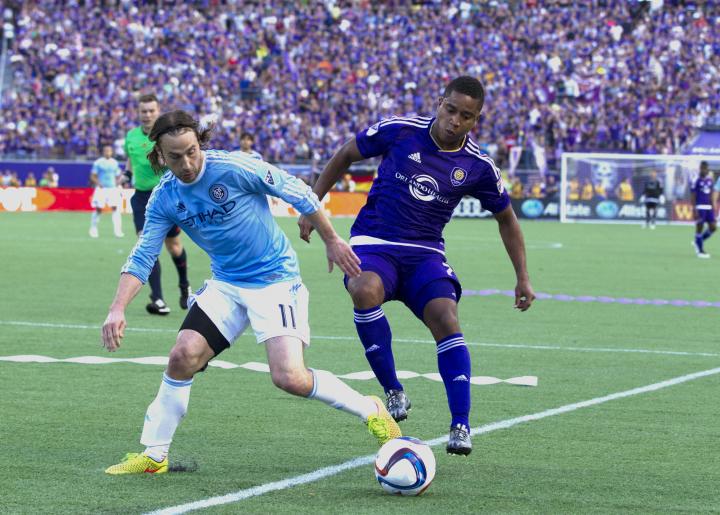 Celebrating its 20th season, the MLS announced the New York City Football Club (NYCFC) and the Orlando City Soccer Club as its 20th and 21st teams in May and November of 2013, respectively. NYCFC is owned by English Premier League powerhouse Manchester City FC and Major League Baseball’s New York Yankees.

“I grew up playing soccer and never really had a team to connect to,” said Nick Ricci, 27, of Brooklyn. He was never a fan of the MLS New York Red Bulls, which have been around since 1994, and thought it was a perfect fit when NYCFC was announced. And as a Yankee fan, what’s better than watching his new team compete at his favorite ballpark.

Alex Sapuppo, 21, of Long Island, said he’s excited to be a part of a team built from the ground up.

“We were just talking about how we hope 50 years from now this team is still around and we can say we were there from the beginning,” Sapuppo said.

One of the biggest NYCFC names, David Villa, 33, from Langreo, Spain, was the club’s first-ever player, acquired through a free transfer from Atlético Madrid on June 2, 2014. Villa earned his professional breakthrough in 1999 with Sporting Gijón B, scoring 25 goals in 65 appearances. Named the Spanish Player of the Year in 2005-06, Villa went on to score three goals in the 2006 FIFA World Cup, finished as the UEFA Euro 2008 tournament top goal scorer, helping Spain to its title, and overtook Spanish player Raul as Spain’s all-time leading scorer with 59 goals in 97 appearances.

As soon as video of Villa walking in Orlando City SC’s Citrus Bowl flashed across wall-to-wall television screens, energetic fans, tossing up pints and pitchers in the air, sang their NYCFC song to the tune of “This Old Man.”

“[Villa] was the player I watched in college [on Barcelona] and now that he’s on our team it’s amazing,” said Long Islander Mike Greenbaun, 25, draped in an NYCFC baseball hat, scarf, tee and jacket.

NYCFC boasts a 28-man roster, comprised of players from all over the world. Their experiences range from the United States Men’s National Team (USMNT), international leagues and other MLS teams. Thirteen of the players are 25 and younger, with three at 21.

Mikkel Diskerud, who fans called Mix, appeared already a favorite too. The 24-year-old from Oslo, Norway signed on a free transfer from Rosenborg in early January. As a Norwegian and American citizen, Mix has competed on the USMNT and was named to the 2014 FIFA World Cup squad.

“Signing Mix was really cool for us ‘cause it’s something that we were talking about right before they did it,” said Sapuppo. “He’s one of our favorite players for the national team.”

Mix, in his MLS debut, cemented his name in NYCFC history by scoring the club’s first-ever goal in the 76th minute, a low shot to the far corner, driving past goalkeeper Donovan Ricketts. Fans at Nevada Smith’s erupted into cheers, singing to the tune of KISS’ “Rock and Roll All Nite,” “I wanna Diskerud all night and party everyday!” But the party halted when Orlando City SC’s Kaka – 2007 FIFA World Player of the Year – netted the game’s tying goal in the 91st minute when his free kick deflected in. The contest, in front of 62,510 fans, ended in a draw.

NYCFC’s next match on March 15 is another historic one – their first at home. They will host the New England Revolution at Yankee Stadium.

“Every soccer fan loves his own stadium, it’s just part of the culture,” said Peter Siafakas, 21, of Long Island. “[Yankee Stadium] is great for now, it gave us great exposure … but I hope they’ll move out soon.”

Sapuppo, a Red Sox fan, said he’s not excited about home field, but it’ll have to do.

“To be there from the beginning you got to stick out some stuff, right?” Sapuppo said.

Enduring a forced rivalry with Orlando City SC might be something that NYCFC fans will have to deal with for a bit. But Sean Proctor, 22, of Midtown, said he thinks a better rivalry would be against the Red Bulls.

Whether the two will end up rivals this season has yet to be determined. Fans will have to wait until May 10 when the two compete at Red Bull Arena in Harrison, N.J. For now, they’re excited to watch their new team.

“It’s nice to have someone here now,” said Thomas Bruno, 22, of Long Island. “I can support it and have something to really call our own. It is a New York City team.”