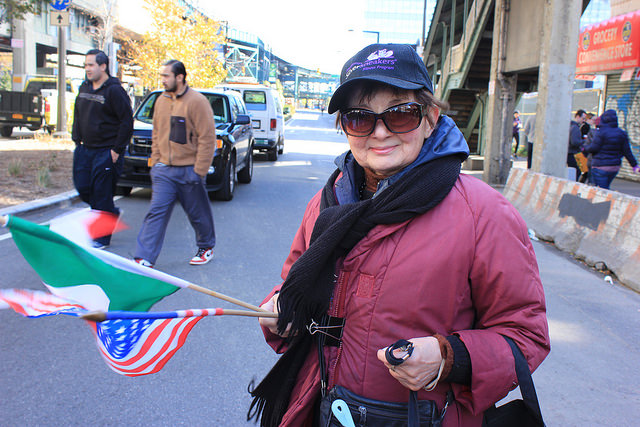 Hundreds of spectators came to the Queensboro Bridge this afternoon to cheer on the 2014 TCS New York City Marathon runners at mile 15. Mary Thabobaldi, 65 of Sunnyside Gardens, Queens, came out of respect for the runners.

“They all run with some faith or for some one,” said Thabobaldi. “I cheer for them because they cheer me up in life. I never missed a single marathon in New York City in 34 years.”

There are many runners that stood out for her over the years, Kiki Homer was one of them. Thabobaldi knew Homer through work, but had no idea that she was the younger sister of a national hero.

Holmer’s brother, LeRoy Wilton Homer, Jr., was the co-pilot of United Airlines Flight 93, a plane that was hijacked by terrorists on September 11, 2001. During passengers and crewmembers’ fight with the terrorists, the plane crashed, avoiding its intended target, the nation’s capital.

In memory of her brother and other people who sacrificed their lives to protect homeland security, Homer ran her first New York City marathon with 15 other Flight 93 relatives in 2002, one year after her brother’s death.

“I was right here at the Queensboro Bridge, saw her wearing a picture of her big brother, it was incredible,” said Thabobaldi.

In 2011, marking the 10th anniversary of the plane crash, Homer ran again for her brother. And of course, Thabobaldi was there, too.

She was also impressed by Homer’s family, who supported her through the race.

“They tracked her, showed up here on the platform bridge right at the time when she passed by, cheered for her, and then hopped on the train to the next stop,” she said.

It was the same platform where Thabobaldi always stood on to watch the running, but this year things are a little different—police banned spectators from assembling there. Thabobaldi said she missed her old spot with great views, but she understood that the police was doing this for security reasons.

“They are trying to make sure nothing happens like on the Boston Marathon, you can’t blame them,” she said.

Thabobaldi described the Boston blast as “one of the worst things that ever happened”, but the terror didn’t end her enthusiasm to attend marathons in New York City. She is confident about the resilience of New Yorkers.

“Not only me, I think no one in this city was deterred by that,” she said.

Thabobaldi said one of her favorite things about the marathons is the diversity.

“People from all over the world are running,” she said. “I love to see that. I will keep coming here and support it every year.”