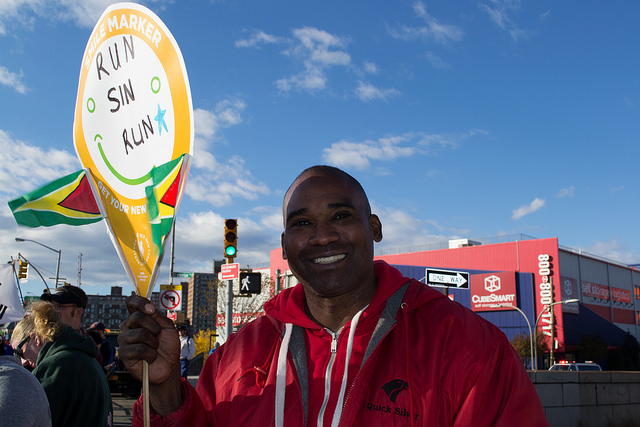 Keith Claxton has been attending the race for the five years in a row. A person he met on the sideline gave him the sign, but Claxton cheers for everybody.” – Photo by Lisa Setyon

For the fifth year in a row, Keith Claxton, 53, of Eastchester Road in the Bronx, stood near the Willis Avenue Bridge encouraging the runners soaked in sweat to finish the race.

“I love the sport and I think it is something awesome that people run 26.2 miles,” Claxton said. “I just come to show my support for them. It is the least I can do.”

Today , 21 miles away from the finish line, Claxton, an accountant originally from the Virgin Islands, was among the thousands of spectators, waving, cheering and pushing the runners to get through the Bronx. Every year Claxton arrives at 8 a.m. and stands by himself, in a red  track jacket, grey sweatpants and Nike sneakers.

While most of the other spectators are in groups and at the bridge to support a friend or family member, Claxton is there to support everyone.

“I cheer the last person to come across so I’m going to be here until the night,” Claxton said. “It just gives me a good feeling to be here, to be able to cheer them on, because, if they can run 26.2 miles, what is it for me to just turn up here and cheer?”

Claxton has lived in the Bronx for the past 25 years. For him, having the marathon in his neighborhood is also a way to add color to an area that has often been discredited.

“It gives people an opportunity to see a little part of the Bronx,” Claxton said. “I wish they could have gone more inside the Bronx so they get a better understanding of what the Bronx is.”

Claxton also sees it as a good way to gather communities together.

“Young, old, black, white, all nationalities are here,” Claxton said. “A sport like this bring everyone together. It just supports one cause, no division, just a marathon.”

Ten years ago Claxton used to run. But with a new job and taking care of his two children, Claxton stopped. But as he watched runners run past him, Claxton was envious and felt it was time for him to run again.

“I got caught up with just life,” Claxton said. “Sometimes you tend to put your hobbies on hold just to make a living. Now my two boys are 29 and 22. I feel like it is just time for me to go back out there and do me.”

His goal for next year is to run the marathon.

“My part right now is just to cheer,” he said “Hopefully next year, I’ll be running and I’ll have someone to cheer for me so I’m excited about it.”

If Claxton was looking forward to attending the marathon, the highlight of his day was seeing marathon winner May’s Keitany’s performance.

“She was sprinting and killed the hill in a sprint,” Claxton said. “I almost didn’t even see her, nobody was nowhere close, she really dominated the field this year. This a repeat for her, the third times she wins that in a row, it’s a big deal.”