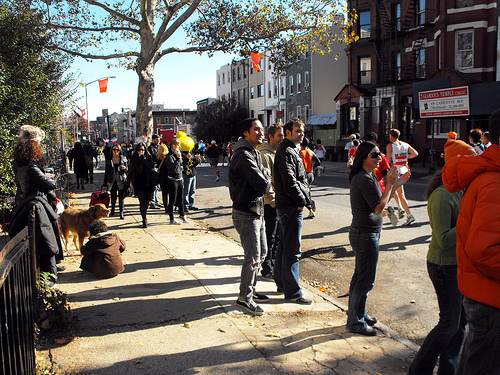 Inches from Eileen Giannantonino’s post on Lafayette Avenue today, a marathon runner tripped over a stretch of uneven road and tumbled to the ground in front of her. Even after members of the crowd helped the runner up from the street and he continued, Giannantonino’s face remained twisted in concern.

Just below Franklin Avenue, the Giannantonino’s stood in a shaded spot along the edge of the street ringing mini, multi-colored cow bells, waving a yellow duck balloon and shouting out the names of almost every runner who ran close by. Giannantonino was so eager to show her support for everyone that at one point she quietly said “We need more names,” implying she would yell any name she could read.

Giannantonino’s niece, Gillian Casey, was participating in the marathon for the first time, running in memory of her late mother. Still waiting for Casey to pass, Giannantonino loaned her support to other runners.

“It’s absolutely amazing. You can’t sit at home and watch this on TV. That doesn’t do it justice,” she said.

Although levels of enthusiasm and personal investment varied among members of the crowd, a plethora of whistles, Haitian flags, instruments, dancers and neon signs—with slogans ranging from “Beer Run?” to “Almost There”—let the runners know that the community cared. Some people even dressed in costumes or danced along the sidelines.

Tom Binasco of Clinton Hill joked that he didn’t have any choice but to watch the marathon, as the route goes right past his front door.

While periodically ringing bells with friend Jackie Jones of Bay Ridge as runners passed, Binasco said that his brother-in-law, John Russo, was running in the marathon.

“It’s pretty awesome. I mean, the fact that anyone can run a marathon is pretty awesome. This is a world event, and I can watch it from my doorstep. This is one of the nicer things in the neighborhood,” Binasco said.

Up the street, near Franklin Avenue, neighbors held a barbeque near the Lafayette Gardens Playground, which is attached to the Lafayette Gardens housing project. People danced and children played, paying little attention to the marathon itself, illustrating many people’s belief that the marathon gives the city a chance to be a real community and strangers a chance to unite.

Bobby Graham of Clinton Hill has lived in the neighborhood for 10 years, and he watches the marathon each year without fail.

“It’s a celebration of the neighborhood and all of New York,” he said. “We don’t get to interact much as jaded New Yorkers, but this brings everyone out…It’s inspiring.”