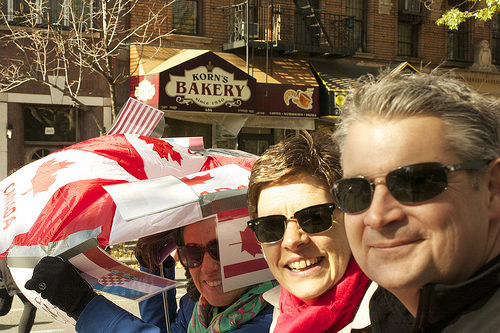 For many of its’ participants the 2014 TCS New York City Marathon is a test of strength, but for a group of Canadian spectators it’s an opportunity to greet friends from around the globe and share in their love of running.

As the sea of runners made their way through Williamsburg, from the side of Bedford Avenue today, Tracy Spatteri and Jane Rait-Parks of Ottawa Canada frequently put their conversation on hold to bellow “Yeah Canada!” every time a participant sporting the maple leaf ran by.

Both Women made the seven-hour drive from Ottawa to support their friends and family running in the marathon.

Spatteri and Rait-Parks are part of a larger international running team they helped put together after last year’s marathon. The team refers to themselves as the Dungog Dashers. They take their name from Dungog, a country town in Australia where one of the groups’ originators lives.

Spatteri clung tightly to a small open umbrella, covered in Canada’s red and white and adorned with pictures representing each nation in the group. As the pictures hanging from the sides of the umbrella become a mess of tape and paper in the wind, the groups’ wide reach became evident.

“The team is from all over, we all met at the marathon last year,” said Rait-Parks. “We’re here just cheering, and running, and supporting each other… we came back together on Facebook after last years marathon and have just continued our relationship since then.”

The Dungog Dashers, inside of the marathon, are just a microcosm of international spirit. Rait-Parks emphasized how events like the New York City marathon are good for the world.

“I think it’s pretty neat that people from around the world are all doing the same sport together. It’s good for world unity I’d say,” said Rait-Parks. “Running is the most basic sport you could ever do right? You start out in one place and you get to another place. It doesn’t take anything fancy, It’s natural. No crazy equipment’s involved, and it knows no socio-economic boundaries; and that’s why it brings people together.”