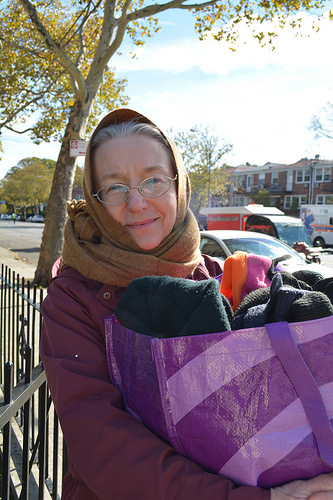 Pat Corsilli, 64, of Bay Ridge, Brooklyn, proudly shows off the hats and gloves she collected from warm runners at 2014 TSC New York CIty Marathon. She will give the clothing to people in need. Photo by Virginia Gunawan.

All that was left from the chilly 2014 TSC New York City Marathon in Bay Ridge, Brooklyn, by 11.30 a.m today, was the amount of clothing thrown off the bodies of the runners.

After running two miles across the Verrazano Bridge, they started to strip off their gloves, hats, and jackets.

Standing on the side of 92nd street, Bay Ridge, Brooklyn, Pat Corsilli, 64, loudly cheered as the runners ran past her discarding their layers as the sound of beating drums, courtesy of a drum filled the streets. But while waiting for the next wave of runners, she went to middle of the street and collected the clothing the runners threw off their now warmed up bodies.

“If you could give me the hats and the gloves, I’ll give you this jacket,” said the Dyker Heights, Brooklyn residence to another clothes collector. “I don’t need this (jacket).”

Corsilli was not the only spectator who collected thrown clothing along the marathon course. But she was specifically looking for hat and gloves because she has a mission.

“I give them to people who want to shovel the snow,” she said.

During the winter, many Mexican immigrants would come knocking on her door and offer to shovel snow off her driveways.

“I’d say, I shovel my own snow, but if you need hats and gloves, you can help yourself,” she said.

She didn’t want any jackets because hats and gloves are easier to store and those are the most needed by the people who knocked on her door, she said. 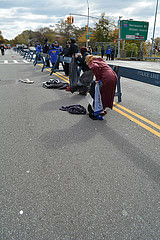 Just before the next wave of marathon runners came, Pat Corsilli, 64, collected clothing thrown by the previous runners. Photo by Virginia Gunawan

Today, she collected a big bag of hats and gloves. She said she would then sort paired gloves and decent hats, wash them, and put it in a basket in front of her door.

For her the marathon has been exciting and she has been an enthusiast spectator for 16 years.

“You know today is the marathon when you can hear the helicopter hovering above your head,” Corsilli said.

But she has only started collecting hats and gloves three years ago. The idea came from the real estate agent who helped her find her current house in Brooklyn. The agent volunteers at her church’s clothing donations and Corsilli thought it was a great idea to help those who need them.

“These are wearable, why do we want to throw it away?” she said while rubbing off the autumn leave of a Union Jack glove.

As the last runner passed and the drummers stopped playing, sweeper trucks came along. Whatever clothing was left on the street would be swept away and considered garbage.