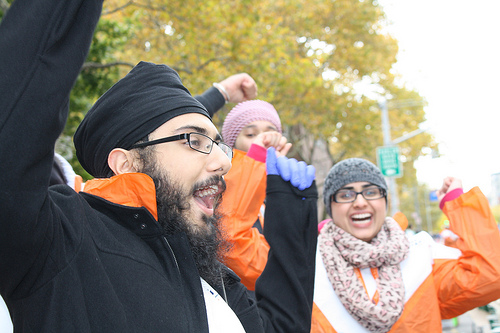 Harmann Singh, 19, of the Surat Initiative, takes a break from handing out Gatorade to marathoners to cheer them on with his friends. Photo by Rajeev Dhir. 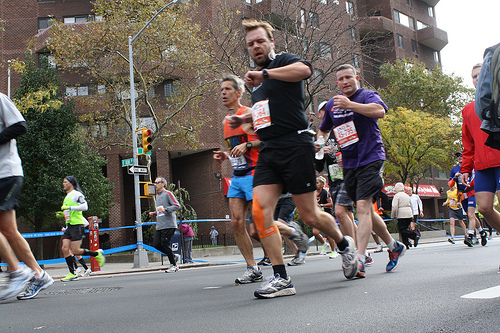 A runner checks his time along 1st Avenue. Photo by Rajeev Dhir

Brisk weather and a light drizzle of rain didn’t keep tens of thousands of runners from hitting the pavement and even more enthusiasts from lining the streets to cheer them on from the sidelines at this year’s ING New York City Marathon.

“It’s cold!” said Francis Brown. The 64-year old found a spot along 1st Avenue in East Harlem at 8 o’clock Sunday morning. “I’ve been coming here for the last five years,” she said. “It’s always like this. That’s why I’m wearing my coat and hat!”

Despite the cool weather, the mood along the streets was heating up. Yassier Payano, 17, and seven other members of the Bronx Lab School Band belted out urban beats to keep runners’ momentum going. Even though he now lives in the Bronx, Payano wanted to play in the same neighborhood he grew up in. 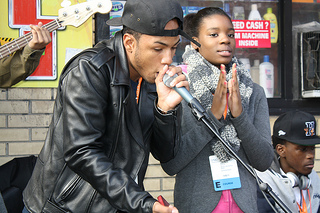 Yassier Payano, 17, of the Bronx Lab School Band, raps along the marathon route to motivate runners. Photo by Rajeev Dhir.

“I play sports and I run, so I know it’s hard to go that long,” Payano said in between sets, referring to the 26.2-mile course. “It’s important for us to be here because they might need something to keep them going.”

A few feet away, fellow classmates Lisany Mendez, Shaisa Garcia, and Yalitza Sabro danced and cheered on the athletes from the sidewalk. “They’re just thinking about the end. That’s their goal,” Mendez,15, said. “We’re here to help them get there.”

“They need motivation,” said Sabro, jumping in. “This is so exciting for them, but also for us. It’s the first time we’re here and it’s really amazing.”

It was a year of firsts for many revelers. A dozen Sikh students from the Surat Initiative handed out Gatorade for the first time at the marathon. Director Gunisha Kaur said the organization serves the community through education and social advocacy. Surat also has a monthly running group, which was inspired by Fauja Singh, a 102-year old record setting marathon runner originally from India who now lives in the United Kingdom.

Harmann Singh, 19, of the Surat Initiative, takes a break from handing out Gatorade to marathoners to cheer them on with his friends. Photo by Rajeev Dhir.

“We have five people from our running group taking part. That’s another reason why we’re here,” Kaur,29, said. “We’ve been tracking them on our phones and cheering on everyone that goes by. It’s so inspiring.”

Inspiration was a major theme at the event, a year after Hurricane Sandy forced the cancellation of the 2012 marathon. “Sandy’s come and gone and we are still good,” sang Gospel singer Claude Jay before breaking into a cover of This Little Light of Mine. 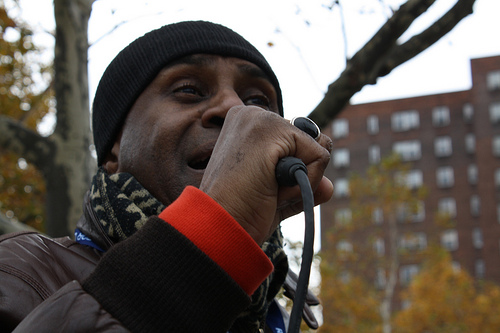 “Nature just said no, but it’s an awesome blessing to be back,” Jay said. The Harlem resident said he recognizes the incredible challenge the runners take on, which is why he gives back by singing soulful Gospel music.

“This race is like life,” Jay said. “Watching this is like a sermon. There’s a higher power that’s behind all this. If I can’t run it, I’m grateful to be taking part by passing on God’s message through song.”