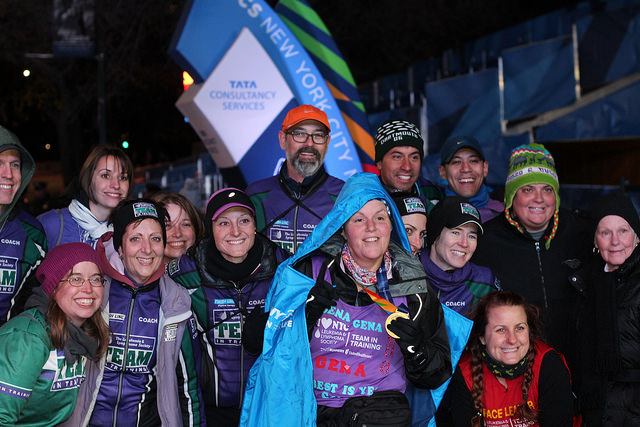 Gena Wilson, a cancer survivor, shows off her medal at the finish line of the 2014 TCS New York City Marathon. She is surrounded by her Team in Training Coaches. Wilson, 47, finished the marathon in 9 hours, 40 minutes and 47 seconds.

None of the remaining spectators could quite get the facts straight. “She is from Sweden,” a man said. “No, born and raised in Scotland,” another person chimed in. “I think she is the first person to run the marathon with this rare disease,” someone said hesitantly. The people gathered late last night at the finish line of the 2014 TCS New York City Marathon did not know the story behind Gena Wilson’s life, but she was part of their team, and they were going to wait for her to finish the race.

Originally from South Carolina and now living in Glasgow, Scotland, Gena Wilson was one of the last people to finish the NYC marathon yesterday. Although, it was not her country of residence that made Gena a big hit at the race’s finish line in Central Park, but rather that she has survived two bouts of non-Hodgkin’s lymphoma. Her most recent battle came in 2013, where doctors told her family to get on the first plane to Scotland because they though she was not going to live much longer.

“The cancer had come back in the form of a brain tumor,” said Wilson, 47, who was first diagnosed with cancer in 2011. “I really was not supposed to live.”

Wilson, who works at a Christian mission organization in Glasgow, credits god for keeping her alive. It is the only way she can come to terms with how she was able to beat cancer twice, and come out of the process strong enough to complete a marathon. Along with working for a mission, Wilson, who now has completed her second marathon, uses these events to share her story, and inform people of the power of faith.

“The reason why I wanted to run is because, well, god healed me,” said Wilson. “My main thing is to tell the world that oh my goodness, I shouldn’t be here, but look what an amazing god who controls everything did for me, once again.”

On top of trying spreading her religion, Wilson also ran the New York City Marathon in order to raise money to help fight cancer. Wilson was part of Team in Training, an organization sponsored by the Leukemia and Lymphoma Society that trains people to complete endurance competitions, and in return the participants raise money for cancer research. For Sunday’s marathon, the group began training five months in advance, following a strict fitness regiment that included meeting twice a week for team conditioning sessions. Living in Scotland, Wilson did not have the ability to train with her teammates, but she was able to find people willing to help.

“I was just doing my own walking plan,” said Wilson. “It was hard, but there were so many people that were such a blessing. Tons of people walked with me.”

Despite not preparing with Team in Training, Wilson was mobbed with hugs and high fives from coaches and members of the team when she finished the race around 8:30 p.m., good for a time of 9 hours, 40 minutes, and 47 seconds. Wilson appreciated their support during and after the race, but she was truly grateful for her family whom she knows she would not have been able to complete the New York City Marathon without.

“I couldn’t have made it without my mom and sister,” said Wilson, who was joined by the two for the last few miles of the race. “My mom and sister were the ones who came up here, spent the week, and just did everything for me.”