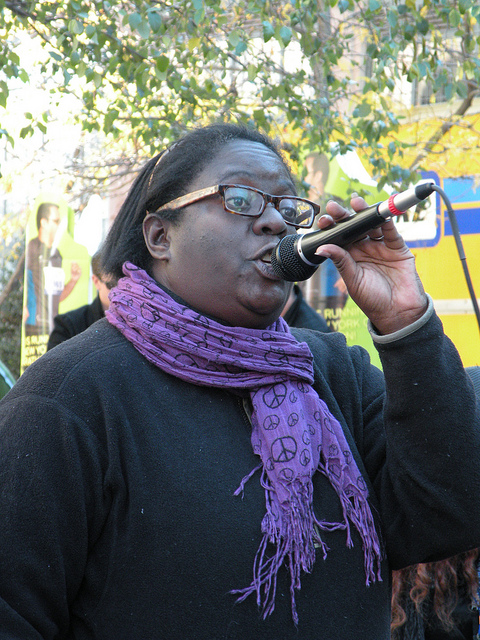 As New York City Marathon runners crossed over the Queensboro Bridge and into Manhattan, for the first time on their route they were welcomed by familiar tunes.

Girls On Top, a New York City-based cover band, has acted as a musical cheering section for marathon runners for the past six years.

“In a way, it’s very personally fulfilling,” said Ria Spencer, lead singer of Girls On Top. “I think that if you’ve ever hung out and actually watched the marathon, it’s really one of those opportunities to see people at their very, very best.”

The band, which comprises seven women and one male drummer, specializes in playing classic rock and rhythm and blues from the 1960s through the 1980s. They have played at numerous venues in the greater New York area, but the marathon remains one of their favorite gigs.

“We have a much better spot now,” Spencer said, reminiscing about their first time playing the marathon. “The first time we did the show, we were at a Dunkin’ Donuts parking lot in Brooklyn. So we have worked our way up to being the first stop in Manhattan.”

It has become common practice for bands to volunteer their services alongside the marathon route in recent years. As Spencer explained, many feel that they serve as an extra inspiration for the runners.

Yet, since moving up to the ideal spot at the foot of the Queensboro Bridge, Spencer feels it’s an even greater honor to greet runners as they enter the city and the final 10 miles of the race.

“I’ve had some pretty amazing experiences here,” she said, getting ready to belt out her tunes. “Last year there was a woman from England who came up and asked me to cheer for her brother who was running the marathon in her honor because she had breast cancer. It was amazing to see this whole family who were all in tears. I started to cry, and I didn’t even know these people.”

As the first female runners crossed the bridge, turning north onto First Avenue, the band began to play “Venus” by Shocking Blue.

During the saxophone and guitar solos, Spencer shouted encouraging words to the runners.

“Looking good, ladies!” she yelled into the microphone from atop a large, concrete block. “You’re almost there!”

As the men turned the corner about 30 minutes later, the band switched to Bruce Springsteen’s “Pink Cadillac.”

“Let’s be honest, I am never running this race, I assure you,” Spencer said with a laugh. “Four and a half hours of singing is long enough. But I can do my part. Everyone has a talent. Mine is not running, but I can sing!”

She said the band would play until about 1 p.m., at which time they would follow tradition by attending brunch at a local restaurant followed by a trip to one of the band member’s apartments to look for themselves on the news.