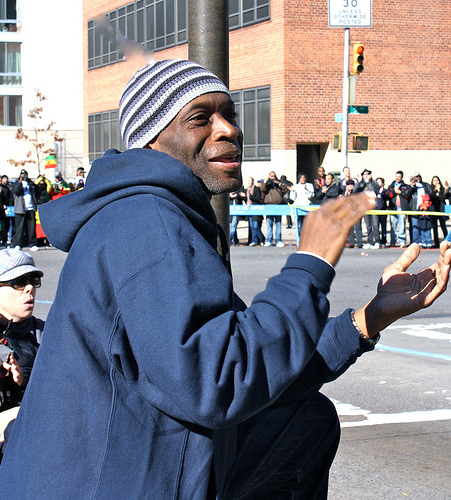 “I hurt my back while training,” he said. “It’s hard not being able to be inside the barriers.”

Henllay doesn’t consider himself an athlete, but he put a lot of effort and time training for the marathon.

Time is something he has been having a lot lately. More than a year ago, he was laid off from his job as a financial consultant. To overcome the sadness and frustration, he took up running.

“I’d get up everyday at 5 in the morning and would run until 8,” he said. “Also being unemployed made me very depressed, so the running kept me from feeling worse.”

Henllay runs with a group of friends who also live in Harlem, and he came to the marathon to cheer them on.

“I can’t wait to see my friends passing by,” he said. “We put up some music boxes and their wives brought horns to greet them.”

Greeting marathoners is something Harlem does best. On practically every corner, there are DJs blasting music.

“It feels like a giant block party,” he said. “When I used to run the marathon, the Harlem mile would always be the loudest one.”

Henllay has been living in Harlem since 1999. He believes the New York City Marathon helps to bring more unlikely visitors.

“Some people complain about the mess after the marathon is finished,” he said. “But I think it’s a great opportunity to show that Harlem is filled with culture, music and good people.”