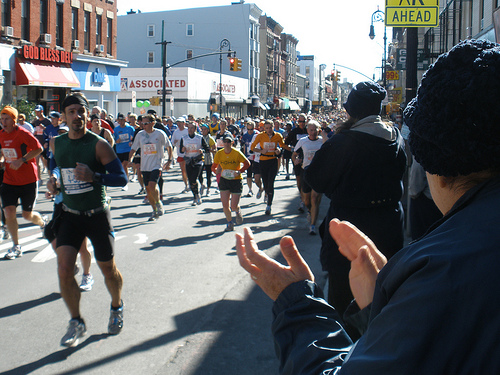 Spectators cheer for runners in the New York City Marathon across from St. Anthony's Church in Greenpoint. Photo by Rachel Ohm

St. Anthony’s Church bells, which normally can be heard throughout the Polish neighborhood of Greenpoint, Brooklyn, were drowned out today by the cheering of spectators of the ING New York City Marathon.

St. Anthony’s Church is considered a “photo-op” at the 20K mark and comes right before the runners cross the Polanski Bridge into Queens.

“It’s an important spot to cheer at because there are no spectators on the bridge, and usually there’s isn’t as much of a crowd in Long Island City after you cross,” said Helen Serreno, 41, of Greenpoint.

Serreno and her mother, Tamara Serreno, 77, also of Greenpoint, were among spectators lining Manhattan Avenue as runners raised their arms and smiled for cameras.

The Serrenos, who emigrated from Germany, have come to watch the marathon from the steps of St. Anthony’s for the last 10 years. Last year, they volunteered handing out tissues to runners.

Helen Serreno, who has run three New York Marathons as well as the Berlin Marathon, said St. Anthony’s marks a spot in the race where runners “are feeling good and their energy is up.”

“The marathon is almost like a relief. It’s like taking a final exam and getting ready to graduate,” she said. “Training for it is the hard part.”

Although she doesn’t run anymore because of her knee problems, Serreno finds it important to come and cheer on runners.