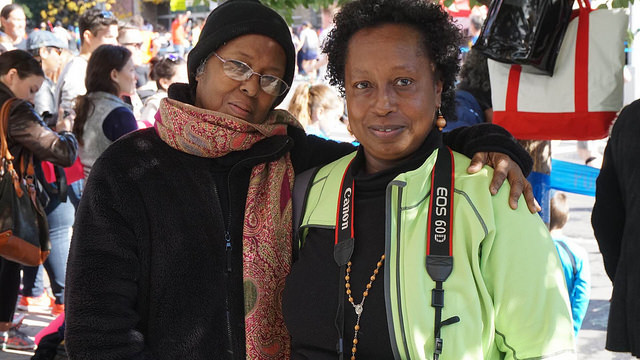 Taidé de DeLeon watched the sweaty runners come through Downtown Brooklyn in shorts and tank tops. She was bundled in layers of dark sweaters, a scarf covering up to her nose and a beanie pulled down to her eyebrows.

This is DeLeon’s first time watching the marathon. She came from Panama to accompany and support her friend, Belinda Ricketts, 59, who was photographing the runners. The two are longtime friends and travel partners.

Downtown Brooklyn was closed off for the marathon on Atlantic Avenue. Blue police tape sectioned the sidewalk for the spectators, but many spectators were not fazed it and stood on either side. The shops were mostly empty or closed and not much attention was on anything but the runners.

DeLeon’s friend, Ricketts, had been photographing the TCS New York City Marathon as a hobby since she came to New York at 18. This is the first time she invited DeLeon.

The runners came in waves and one woman stopped in front of the two friends to catch her breath. Ricketts learned her name and cheered her on to keep running while snapping pictures on her Canon camera. DeLeon clapped encouragingly.

In Panama, DeLeon, 67, was a history teacher with no plans for traveling because it wasn’t in her budget. Even with her husband as an economist, money was tight.

Now that her daughter’s graduated from college, she and Ricketts have plans to travel the world.

“I’ve always wanted to come to the United States with someone who spoke English,” DeLeon said in Spanish. “My husband wasn’t as desperate to travel as me. Neither was my daughter.”

Ricketts and DeLeon met in Panama, in 2008, while Ricketts was there to settle some property issues. The two quickly became friends and planned numerous trips together.

But in 2014, Ricketts was diagnosed with breast cancer. The two postponed all their travel plans for Ricketts to go through treatment in Panama and DeLeon to help her through it. Now they stood on the sidelines as runners passed by, Ricketts photographing them and DeLeon supporting her still.

Barely done with her treatment, Ricketts clapped, cheered and filmed the runners as she stood in the sun with an open neon green jacket. She could have easily been mistaken for a volunteer.

“I wasn’t too worried to lose material things,” said Ricketts of her life before being diagnosed with cancer. “Money only lasts a short time. [DeLeon] said money calms the nerves but that calm is temporary.”

Another wave of runners passed by and DeLeon turned to clap for them as the music roared. Ricketts pulled out her phone to film the runners since she wasn’t quick enough to snap any pictures with her camera.

“If it were not for [Ricketts], I would have only done [few] things in my life,” said DeLeon. “She’s mobilized me.”