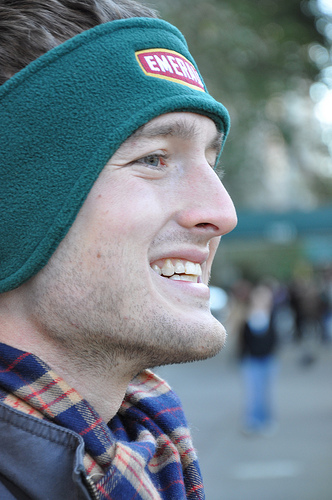 Nathan Thompson watches the marathon from the museum mile. Photo by Ryan Chavis

Among the bustle of strollers, expensive handbags, and the Crocs- and Ugg-boot-adorned feet of the Upper East Side, two fresh faces provided a burst of energy for New York City Marathon runners whose spirits seemed to be waning as they approached the last — and notoriously most difficult — part of the race.

Danielle Cook and Nathan Thompson, both from Alexandria, Va., were constantly banging large, yellow thunder sticks as runners glided steadily past them. Cook and Thompson, who were busy earlier in the morning doing promotional work for Adidas, decided to stick around after their shifts to help cheer on participants.

Bundled up in scarves, jackets and identical dark-green headbands, the duo seemed content in bellowing support as loud as they could. This was the first time either of them had attended the marathon.

For Thompson, 24, the warm reception the surrounding communities lent to the marathon was noteworthy.

Cook, 23, was equally impressed — though cold.

“First off, it’s freezing out here,” Cook said with a laugh. She said they wanted to make sure they caught some of the more “elite runners” in the marathon. Neither Thompson nor Cook knew any of the runners, but they channeled the communal vibe of community togetherness.

“Some people don’t even have anyone that they know in the race,” Cook said. “They’re just out here because they know that the New York City Marathon is where you’ve got to be.”