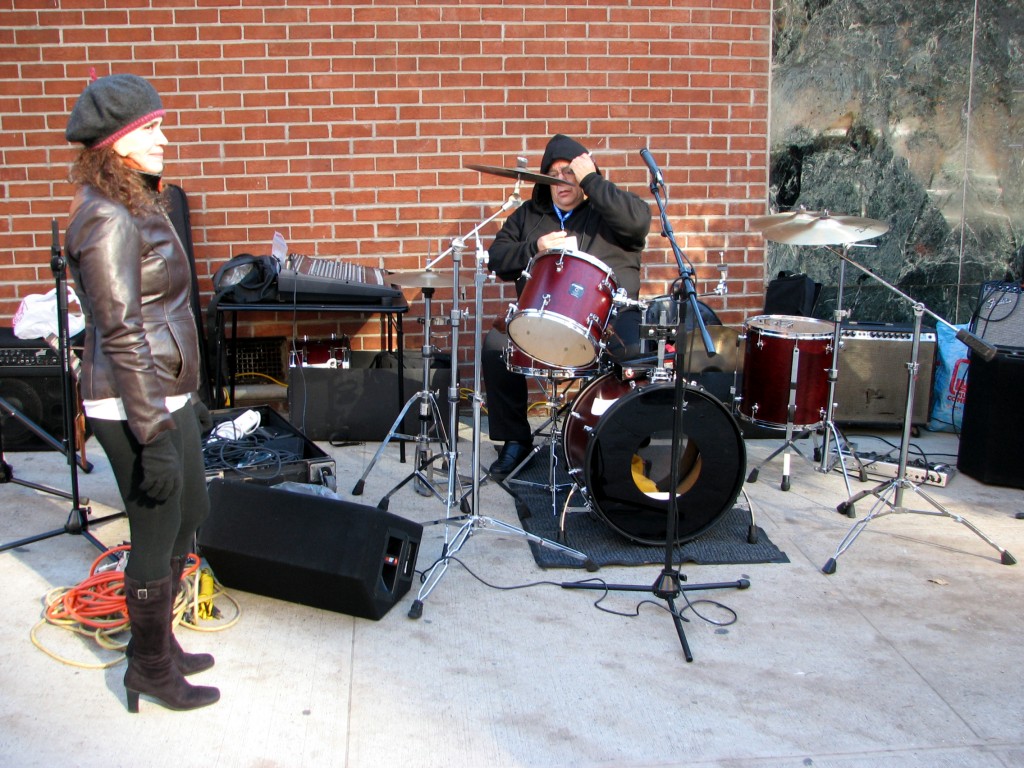 Yolanda Rodriguez and a member of her band, The Dfenderz, waits for runners to pass by in the New York City Marathon on Sunday. Rodriguez said she hoped the band's music provided a much-needed boost for runners. Photo by Jonathan Walczak

Shielding her hands from the chilly morning air, Yolanda Rodriguez pulled on a pair of black gloves as her six-member band, The Dfenderz, settled into a comfortable spot on a South Bronx street corner this morning.

The group waited to play their music — a mix of pop, rock, blues and funk — for runners participating in the New York City Marathon.

A runner herself, Rodriguez said she knows the most important fuel is often not food or water, but music.

“For the runners, hopefully they hear not only the cheers from their supporters and the crowds and everything, but maybe they hear the music,” she said. “When you’re running, it’s great to put on your music. It’s a nice inspiration to continue.”

Rodriguez said the group chose to stake out a spot in the South Bronx, at the corner of East 137th Street and Alexander Road, because the surrounding community is historic, she used to work at a nearby hospital, and many of the good spots in Manhattan are taken early.

Community members, however, have had mixed reactions to the marathon crossing through the area, she said. Some are grateful, but others are annoyed.

“It interferes with a lot of the flow of your Sunday — going to church, etcetera,” she said. “But some people really applaud it and what it brings to the community.”

Rodriguez was born in Hell’s Kitchen, grew up on the Upper West Side and currently lives in Chelsea, where she works as a playwright and author.

When she was 12, she wrote her first song.

None of the band members, herself included, have run in the marathon before, although this is their third year playing music for the runners and surrounding crowds, Rodriguez said.

“We’d have to start our training like a year before to try,” she said. “But it’s nice being here, regardless, as a musician.”