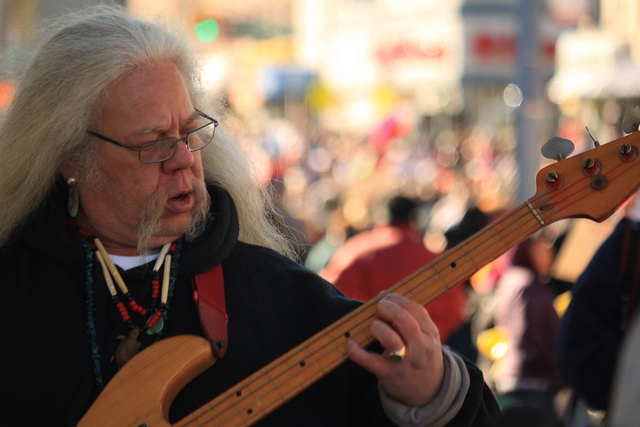 Frank Stokes, of The Awakening Live jazz band, plays for the marathon runners and crowds in Bay Ridge. Photo by Chelsia Marcius

As bass player Frank Stokes strummed his guitar strings for passing marathon runners, one athlete sporting a blue-and-white Italia spandex shirt sprang from the crowd, threw his arm around Stokes and smiled for a snapshot.

Giving a quick glance at the camera’s preview screen, the runner laughed out loud at the picture — a candid of him and the Navajo musician with long, straggly hair — before bounding back into the crowd and disappearing into the blur of color.

Parked in front of a Gulf gas station near the corner of Fourth Avenue and Senator Street in Bay Ridge, Brooklyn, Stokes, 56, and other members of The Awakening Live jazz band jammed between miles two and four of today’s New York City Marathon.

In the last 22 years, he has never missed a race.

“We’ve been through a lot of tragedy. A lot has happened here, and I have to support my city,” said Stokes, who was born and raised in Brooklyn and remembers the Sept. 11 terrorist attacks. “New York needs us.”

Marathon supporters stopped often to greet Stokes, whose style and dress — including his horseshoe mustache and the string of off-white buffalo bone beads around his neck — make him a memorable marathon performer in Bay Ridge.

“As soon as my husband heard the music, he said, ‘I hope it’s the same band from eight years ago,” said Maria Devito, who lives just two blocks away from the gas station along the marathon path but has not been to the race since 2002. “They’re one of the greatest bands here.”

But Stokes said he’s not there to promote himself or the band; his mission is to keep up runners’ morale. A dream catcher of eagle feathers hangs from the handle of his guitar for good luck. Before playing, he burned sage leaves — a Navajo ritual meant to bring about positive energy. And Stokes said in years past, he has continued to play for runners even through pouring rain and frostbitten hands.

“We get them to the next band,” he said. “We’ve got to show them love, and we know this works. We got to get them through these first couple of miles. It’s a long race.”