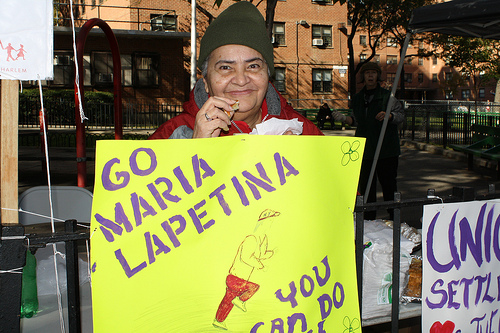 Raquel Mendez, 75, of East Harlem at the NYC Marathon waiting for her friend Maria Lapetina to cross the 19th mile so she can cheer her on. Photo by Ebony Montenegro

Handing out water bottles and pastries Raquel Mendez, 75, of East Harlem and a native of Puerto Rico, stood outside the Jefferson Housing Projects in East Harlem with her organization Union Settlement to cheer on the 2011 New York City Marathon runners and walkers, including a few Union Settlement members.

“I live right there, “ she said pointing to one of the apartment buildings in the Jefferson Housing Projects behind her.

“And I come her everyday,” she said pointing to the James Johnson Weldon Senior Center, one of the places Union Settlement provides senior assistance.

Mendez has been watching the marathon for years.

“How long has the marathon been going on? That’s how long I’ve come out to watch it,” she said.

This year Mendez has something more to cheer about, her friend Maria Lapetina, from the Johnson Weldon Senior Center was participating in the marathon. For Lapetina, 80 years old, this is her first marathon and according to Mendez “she is very active. “

“I’m happy for her. I have two screws in my knee I can’t run too much,” she said.

Mendez has lived in East Harlem for 55 years. Years ago she said there was a lot of crime, but those memories were far away today. The East Harlem vibe was jovial with colorful banners lining the fences of Jefferson Park, a hip hop group performing a few paces away and blue ribbon fencing off the spectator areas. 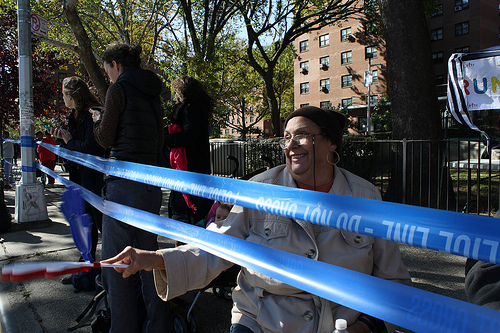 Mara Haddock cheers on the NYC Marathoners at the 19th mile. Photo by Ebony Montenegro

“She is famous,” Maria Estelle Haddock, 67, a friend from the senior center, said of Mendez with a sly wink. “for the trips to Atlantic City. I’m just messing with her so she can give me another donut.”

For both ladies their favorite part of the race is seeing the first runner pass by.

“I get excited when I see the first runner. I like the energy for winning the prize. Some winners need the money to by themselves a little house,” Haddock said.

As a wave of runners approached the 19th mile a few ladies from the Union Settlement cheered them on.

“Keep going. Keep running. Keep walking. You can do it!”

“Estan alimentando la vista (they are feeding their eyesight),” Haddock said of the ladies sitting on the sidelines.“There are so many handsome men running from all other the world.”

As a wave of mostly male runner made their way to 116th Street encouraged by the ladies, Mendez shrugged and continued to hand out food and water to the locals.