NYC Marathon: Resilience in the Bronx 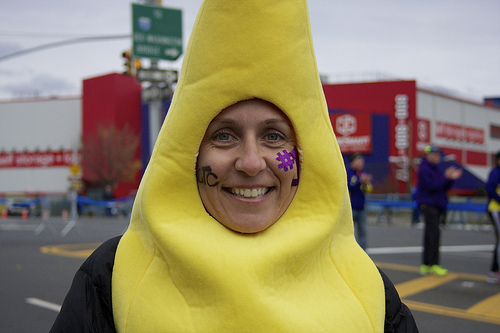 Laura Rodriguez, 34 from Bronx, ran the Boston marathon last year. This year she dressed us as a banana to support runners of the NYC Marathon. Photo by Lea

Laura Rodriguez, 34 from Bronx, ran the Boston marathon last year. This year she dressed up as a banana to support runners of the NYC Marathon. Photo by Léa Bouchoucha

On this windy Sunday morning, hundreds of New York City Marathon supporters came to the South Bronx to welcome and cheer 50,740 runners competing in the 26 mile race. This year, the race was marked by memories of the Boston Marathon bombings and Hurricane Sandy.

For Laura Rodriguez, 34, of the Bronx, the connection with the tragedy in Boston was personal. Though she escaped unscathed, she finished the marathon in April just an hour before the first bomb blast.The attacks killed three people and wounded more than 260 others.

On Sunday she was wore a banana costume and cheered her friends running in the marathon.

“It is very important for us to be here today and to show we are very resilient and very strong,“ she said.

“It was a scary experience,” she said of the Boston Marathon bombings. “So, we are here today to prove that we are not going to be scarred.”

The images of Boston bombings are also not a distant memory for Karin Ortiz, a resident of East Harlem. She came to encourage her four friends running the last six miles before beating the finish line. 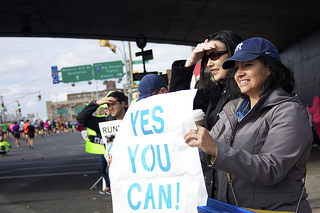 Karin Ortz, of East Harlem, holds a sign to encourage her four friends running the marathon. Photo by Léa Bouchoucha

”This [the marathon] is very poignant,” Ortz said, “There is a big link between New York and Boston, the cities are pretty close and a lot of runners from the Boston marathon are also running in this race.”

Alma Luccirnia, 70, a veteran runner from the Bronx said she had no trepidation of being at the race and did not feel anxious.

“I am not scared of coming,” she said, “We have a lot of police here, I have never seen so much protection.” Luccirnia has completed more than 11 marathons, but came today to support her two friends from Dallas, Texas who participated in the race.

Last year, the big race was canceled after Hurricane Sandy pummeled New York and it was still on the minds of many.

“This is a special day for New York City, we are back from Hurricane Sandy and we want to show that we are resilient and we keep doing what we do,” said Garry Stubbs, 61, of Mott Haven.

He held a sign to cheer his adopted 25-year-old daughter, Yvette Davis. It is the first time she was running the race.

An American Reality: From the 16th Street Baptist Church Bombing to the Capitol Riots

A collaboration between Mississippi Center for Investigative Reporting and NYU Journalism’s Pavement Pieces.