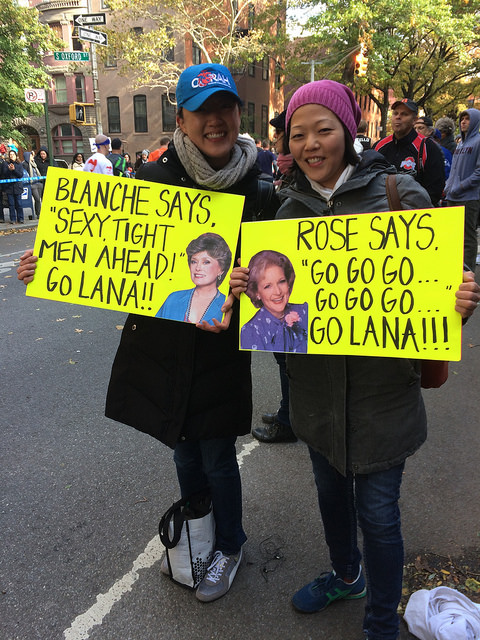 Planted firmly at the course’s ninth mile marker, sisters Naerim Kim and Chaerim Smith screamed in support of their older sister Lana Kim, who passed just moments before. “She’s looking good. She’s looking really strong,” said Kim, of the Financial District. Kim attends the marathon every year, but this race is particularly special because she gets to cheer on family. “This is her first time to ever run it, so we’re here to support her,” said Kim.

To her side, and with neon-yellow banner in hand, stood sister Chaerim Smith, of Washington, D.C. All puns aside, for the sisters, athleticism truly does run in the family. Smith recently ran her own marathon. “We were both training at the same time. She came down to see me and cheer me on at the Marine Core Marathon last week, so I’m here now for her,” she said, referring to her sister.

By mile nine, runners appeared to be easing into a comfortable stride which would send them weaving – and ultimately heaving – through a 26.2 mile course spanning all five of the city’s boroughs, and finally concluding in the southwestern corner of Central Park in Manhattan. The New York City Marathon is the largest in the world, and Kim and Smith aimed to support their sister in at least two boroughs. Their next stop was Harlem, where they aimed to cheer their sister Lana Kim on along the course’s 22nd mile.

While Kim has no plans to run a marathon any time soon, Smith says it’s that sense of accomplishment that keeps her running competitively. “It gives such a good sense of discipline, and it’s a great challenge,” she said.