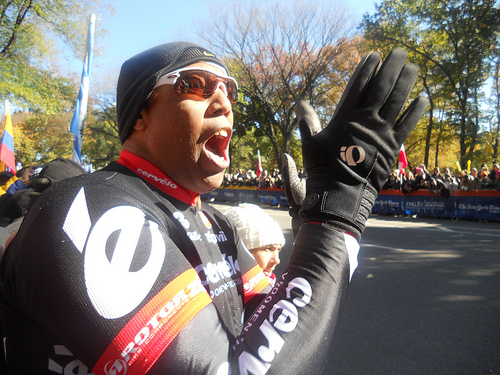 Ted Williams was stuck on the sidelines. A former professional baseball player, Williams, 55, had run in the New York City Marathon in years past, but he had to sit this one out yesterday because of a recent injury.

“The reason why we run is because we love to push our bodies,” he said. “That’s the reason I’m not running in the marathon today, ‘cause I pushed it so hard that I sprained my ankle.”

But there is lots for a spectator to do, such as root for the wheelchair racers.

“The wheelchair division is just amazing,” he said. “You need to have some serious upper-body strength for that. The governor in your head tells your body to slow down and that you might want to stop, but don’t ever listen to that.”

Katie Walkden, 39, a librarian, nodded her head in agreement.

“I can’t even imagine pushing myself like that,” she said. “You get so hungry and tired, and I can’t even fathom what these guys must go through. I never even walked 26 miles before, let alone run it.”

Williams, who rode his bicycle from Bay Ridge, Brooklyn, up to the finishing line at Central Park, ran the marathon last year with a stitch in his hip, which he says was the result of “poor core work.” He had his wife Ellen and their friends shuffle from one spot to the other on the sidelines, to keep him motivated.

It’s moments like those, where people push past physical hurdles, that keep him and Walkden so interested.

“I want to know how the Chilean miner does,” Walkden said. “I’m sure he can do it if he lived through that.”

“Well after going through all that then after, you want to run a marathon?” said Williams. “The question is why?”

Walkden and Williams, who had never met until today, spoke about running techniques and exchanged remedies for body cramps as if they were old friends. Striding your arms in front of you, not at your sides, saves time, and downing a spoonful of honey, they both agreed, was the best resource for energy.

They both say striking a friendship in a city where people usually stick to their own business is why they love the marathon so much.

“Usually people here just keep their eyes down and keep walking ahead and don’t talk,” said Walkden. “But today, you talk to complete strangers and make friends. Where else would that happen? On the subway?”

“I know. I love this city for what they do here, and I don’t even live here. I live in Jersey,” Williams said, bowling over with laughter as Walkden chuckled, amused by the jokes of a former stranger.