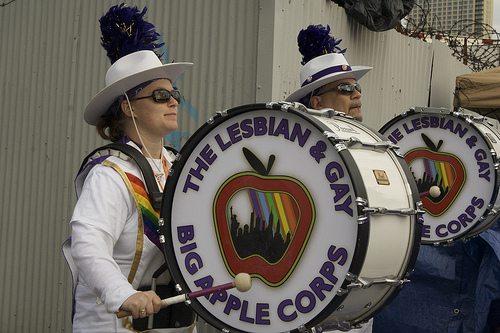 Band manager and percussionist, Lindsay Becker enjoys performing at city events like the ING New York City marathon. She says it feels good to motivate the runners with the band’s songs. Photo by Kulsoom Khan

Band manager and percussionist, Lindsay Becker enjoys performing at city events like the ING New York City Marathon. She says it feels good to motivate the runners with the band’s songs. Photo by Kulsoom Khan

Amid the crowd of spectators attending the ING New York Marathon in Long Island City, Queens, a band decked out in purple and white uniforms and cowboy hats kept both runners and viewers energized with drums and blaring trumpets. A closer look revealed that this was no ordinary band. The Lesbian and Gay Big Apple Corps Marching Band proudly wore LGBTA ( Lesbian Gay Bisexual, Transgendered and Allies) and the iconic rainbow on their chest.

This is the first time the LGBAC is performing at the marathon. Band manager Lindsay Becker said it had been a very positive experience, with runners passing by waving and blowing kisses to the band members who gave them encouraging yells and fist pumps in return.

“Everyone running is just so inspiring and it’s thrilling to stand here and give them a little pep right here in the middle,” said Becker.

Dyanne Irby, a self-admitted “rookie”, joined the band only a few months ago when her roommate encouraged her to look into it.

“The cool thing about the Big Apple LGBTA band is that they allow anybody to come in at any level with no auditioning, “ she said. “You don’t even have to be gay.”

Irby, a sousaphone player in the group, is originally from Maryland and has lived in San Francisco as well, but feels more at home in New York City after moving here in 2001. She enjoys big city events like the marathon.

“I love New York,” she said. “You come to a marathon and think everybody’s going to be wearing running clothes, but then you see people that are dressed up as characters and it’s a lot of fun.” 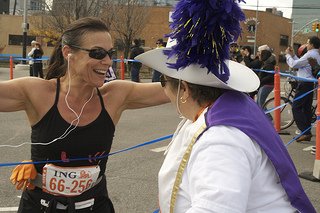 Band member, Leslie Becker offers words of encouragement to a runner in between songs. Photo by Kulsoom Khan

The marathon draws thousands of runners from all over the world.

The Lesbian and Gay Big Apple Corps, which is made up of 85 members, was formed back in 1979, ten years after the Stonewall Riots said Leslie Becker, percussionist and band resource coordinator.

Becker said the LGBAC plays at many events in New York City throughout the year including the New York City Gay Pride Parade, the Fourth of July Parade, and the Washington Market Children’s Halloween Parade. But one event in particular stands out in Becker’s memory.

“We marched as part of the National Lesbian and Gay Band Association for President Obama’s inauguration,” she said with a big smile, “That was amazing.”