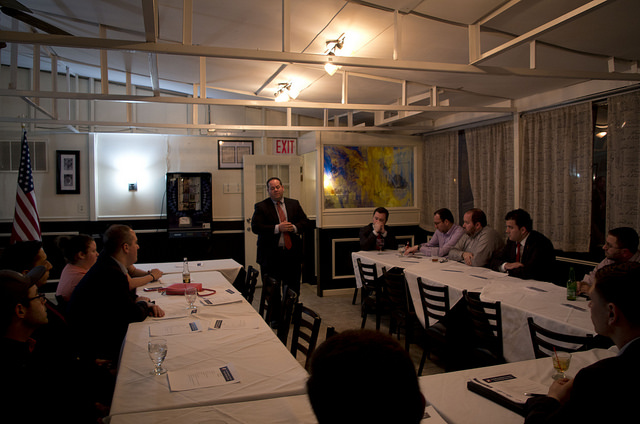 On Staten Island – the city’s most conservative borough – voters are hoping to make an impact on one of the most crucial presidential primaries in decades.

Members of borough’s the Richmond County Young Republicans met yesterday in the neighborhood, to discuss the election, listen to a Republican guest speaker and conduct a straw poll for the upcoming primary. Leading the event was Eric Campione, the RCYR president, who is active in organizing young Republicans in Staten Island.

“We’re a local club that helps Staten Island stay red, as I like to say.” said Campione. “We try and help political candidates that are Republicans stay on the ballots, and make sure that they get elected.”

Staten Island – with an estimated population of 474,558 in 2015 – is the borough with the highest number of registered Republican voters., In the last 12 general presidential elections, the majority of Staten Island voters have voted for Republican candidates nine times. They will have a chance to vote again.

Ron Castorina, Jr., a Republican who is running for New York State Assembly District 62 in a special election next week, was the night’s guest speaker. He spoke on the island’s heroin epidemic, education, and class issues.

“There are lots of issues in education where I don’t believe we should be giving money away to those who don’t deserve it,” Castorina said. “I do, however, I think we should be enhancing TAP, and we should be assisting those in the middle class to advance and to get ahead.”

Key to middle class issues in the presidential primary have been trade economics and tax plans. The Republican candidates have all argued for lower taxes, with some proposing more radical changes to the system than others.

“[T]here should be some sort of even tax distribution, based on the amount you make,” said George Palesano, a Republican-leaning retired member of the New York City Police Department. “Whether it’s federal tax on business services and no income tax, or everybody pays a flat tax with an equal amount of deductions.”

In contrast, Donald Trump’s proposed tax plan favors those making under $25,000 – and those married filing jointly with a combined income of less than $50,000. According to Trump’s website, this means that 75 million households will manage to avoid filing personal income taxes.

Campione, who helps run a plumbing heating and air conditioning company with his family, seemed to favor Trump’s plan because of this.

“In actuality, his tax plans benefit me because I don’t make that much money,” he said. “So I would be able to pay a lesser tax.”

Both Cruz and Trump’s plans are markedly different from the current 2015 single filer personal income tax brackets – and neither reaches the current rate of 39.6 percent for the top income bracket of over $413,200. Ohio Governor John Kasich has one of the most moderate rates of the proposed tax plans, with top income earners paying 28 percent.

In a straw poll conducted at the meeting, Trump won nine votes, Kasich won four votes, Cruz won one vote, and one was undecided.

“I actually read a poll somewhere a while ago. Trump was polling around 65 percent in the 11th Congressional district, which is our district,” said RCYR Secretary Patrick Donegan. “So in this small sample size, this is pretty much on target to what Trump was getting there.”

That Staten Island Republicans would favor Trump, and his economic policies, could be a result of the island’s demographics. Staten Island is the wealthiest borough in New York City, and this is especially true of the island’s mostly white, working and middle-class conservative South Shore – that is, neighborhoods below the Staten Island Expressway. Here median incomes range from $72, 495 to $83,441, depending on the neighborhood. In 2012, over three quarters of residents worked on the island itself, with a majority of jobs in health care, retail, and construction sectors.

The desire by many to reform or simplify taxation reflects middle class concerns among Staten Islanders, just one of many class concerns in this year’s presidential primaries.

“I just went and did my taxes, five or six sheets, I gotta save thousands of receipts, and not only that … people that are wealthy have more access to other ways of cutting their taxes,” said Palesano, “To me, that’s not fair.”