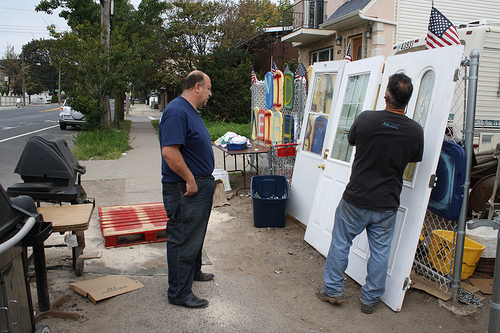 Midland Beach resident Aiman Youssef, with a community member who is donating a set of doors to the Midland Avenue Neighborhood Relief Centre. Photo by Nidhi Prakash

In Midland Beach, Staten Island, voters trickled into Egbert Intermediate School this morning, a site that was partially under water 10 months ago in the aftermath of Hurricane Sandy.

But just a few blocks down the road, Aiman Youssef, 43, sat in a tent on the site of his former home, like he does everyday. The tent has turned it into the Midland Avenue Neighborhood Relief Centre.

The primaries, in fact the mayoral election in general, is of no interest to him. He won’t be voting today.
“I don’t care who is the next mayor, I really don’t,” he said. “I care about who’s going to help who. The people are going to help each other. The politicians, they are going to get salaries and they’re going to move on.”

People come and go from the tent – a man arrived with two hefty doors to donate, A woman arrived looking for beds for her children. They’ve been sleeping on the floor for almost a year now, she said, and it’s becoming a real problem.

Another woman arrived searching for mousetraps – her home like many in the neighborhood has been battling mice since Sandy struck, a result of the flooding. Youssef provides what he can, stockpiled supplies from charitable organizations and community donations.

In the midst of all this, Youssef said the mayoral candidates have had little to do with the community.

“They didn’t approach us to help, so I don’t know if they’re going to help or not,” he said. “But personally speaking I will continue helping the people without asking the politicians.

Youssef and his 79-year-old mother are in a temporary hotel, and must find somewhere to stay when help from FEMA runs out this month. He said the community lost a lot of people, and many are struggling to come to terms with the trauma.

“Some people still start shaking when they see the water,” he said.

Back at the polling station, Diane Cruz, 34, was voting for Bill de Blasio in the hope of better childcare.
She is about to lose free after school care for her four children, and she’s not sure how her family will manage. They’re still in the middle of rebuilding their home and she’s about to lose her job.

“They [politicians] all say, and then none of them come through,” Cruz said. “Something’s got to give.”
When the storm hit last year, Cruz was trapped in a nearby store, unable to reach her children. She said a local man stole a boat and rescued them along with around 200 others.

She wiped tears away as she remembered the scene at the school last year.

“We drove past it with my son and he said, ‘Mommy look- they’re using my school as a morgue,’” she said.
There were body bags lined up outside the building. Eleven Midway Beach locals lost their lives in the storm.

Local resident Arlene Davey, 74, went out to vote in the primaries too. She’ll be supporting Christine Quinn, although she hasn’t been paying much attention to the contenders’ campaigns.

“I just have enough trying to get my home back together again,” she said.