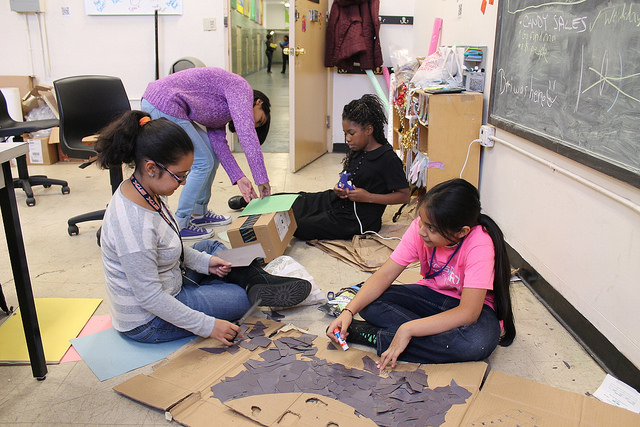 Brianna Rodriguez, 11, and Pamela Flores, 11, work on a backdrop for an “Angry Birds” project at NYC Sparx.Behind them, Madushani Liyanate, 23, helps Brittney Rodriguez, 11, on her project. Photo by Karis Rogerson.

Brittney Rodriguez is an 11-year-old ball of energy. She bounced from her spot, kneeling on the floor in her black dress, to the other side of the white-walled classroom, looking for a hot glue gun. She eagerly announced to anyone who would listen that she wants to go to NYU and be a heart surgeon when she grows up.

Meanwhile, a few inches from her, Pamela Flores and Brianna Gonzalez, both 11, sat cross-legged between a table and the wall, putting pieces of grey paper onto a large sheet and giggling, swapping stories about mutual friends from school. They were making a background for an “Angry Birds” project.

The girls were at a Friday afternoon session of NYC Sparx at St. Mary’s Recreation Center, in the South Bronx. The center is located off of a wide avenue and has an adjoining basketball court and playground, but these girls stayed inside, in their classroom on the second floor whose walls are littered with posters and messages declaring “Sparx Rocks” or “Girls Rule.” There they learned about technology and how to be creative within STEM — science, technology, engineering and math — fields.

NYC Sparx is an outreach of NYC Parks and Recreation’s Computer Resource Center (CRC) with the goal of helping young girls in the Bronx mine their interest in technology and combine that with the arts. 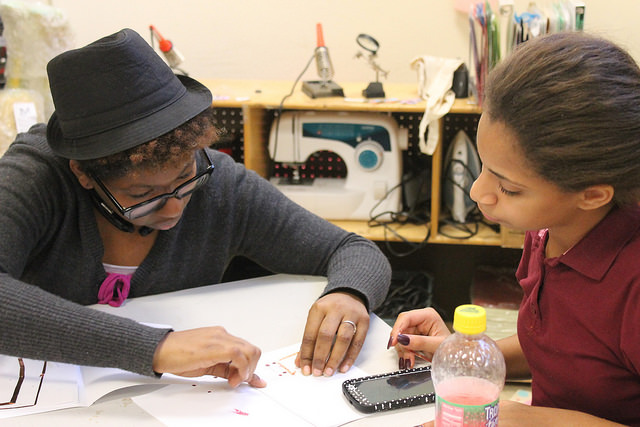 Laira Reid helps Kaylee Torres, 11, with a project at NYC Sparx in the South Bronx
Photo by Karis Rogerson

“The Bronx was chosen since most of the STEM programs available are located in Manhattan and other boroughs,” Sparx Technology Director Laira Reid said. “We wanted to give the Bronx girls the opportunity to have access to a free STEM program that did not require them to travel to another borough. Not all of the girls would be able to afford the transportation costs or would be able to travel the distances safely.”

According to City Data, in 2013 30.7 percent of Bronx residents lived below the poverty level, compared to 14.6 percent in the rest of New York State. For a family of four, this would mean having an income of $23,834 or less, according to the Census Bureau.

Most of the girls who attend NYC Sparx are of Hispanic or African American backgrounds, Reid said. This makes sense, considering each group made up more than 40 percent of total population in the Bronx in 2014.

But those demographics are underrepresented in STEM fields. Latinos make up only 9 percent of STEM jobs, and African Americans (even men) hold few jobs.

Reid said one of the main challenges for girls from minority communities who want to get into technology, including Latina or African-American girls, is economics. 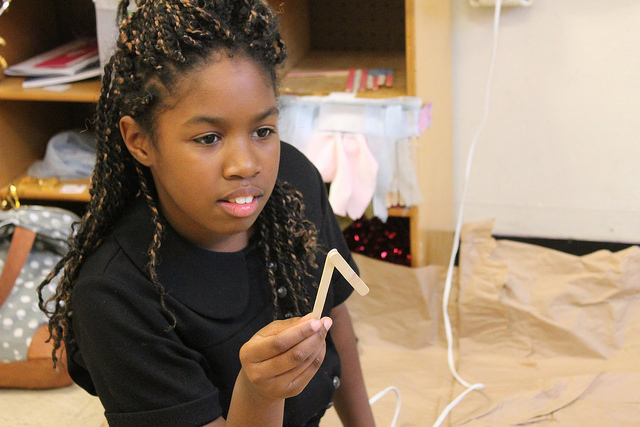 Brittney Rodriguez, 11, is making stick figures out of popsicle sticks to add to her 3D demonstration of what her birthday party will look like. Photo by Karis Rogerson

“Being into technology requires you to be able to play with the technology, this can get expensive,” she said. “If your family does not have expendable income, you may not have access to the newest technology available.”

In addition, a young girl’s location has a lot to do with her potential future in STEM.

“Living in a community that in and of itself does not have the money to attract technology business also means that in order to see it hands on you would have to travel,” Reid said. “This could be a problem if your family doesn’t have money for the rising cost of transportation to and from.”

Co-Director of NYU’s Tandon School of Engineering Science and Technology Studies Christopher Leslie said whites and Asians make up the majority of students in STEM fields, while black, Latino, Pacific Islander and Native American numbers are much lower.

“It does seem that Asian and white men see a brighter future for STEM,” Leslie said. “When they encounter difficulties or have these experiences they know that it’s part of the education process of engineering. Students who don’t have a secure sense of the future won’t necessarily think that they should stick to it.”

Leslie also said that a person’s economic background has much to do with their success in STEM.

“Sometimes it seems like other people are having success because of their social class and not because of what they learn,” he said. “If you come from a less privileged background, you’re showing up at college needing to learn the content and how to study it, and that means that [you] don’t have the same advantage as other students. They might learn a lot, but at the end they’re going to be perceived as being less capable.”

NYC Sparx is for girls only, Reid said, because that allows the participants to open up and learn in a way they might not to if there were boys in the group.

“One of the conversations I had was, ‘How come there’s no boys here?’” she said. “I said, ‘Would you talk to me about the stuff we talk about if there were boys here? Would you even come?’ They say, ‘Oh, we would come, but we wouldn’t talk that much.’ And that’s why this is our group.”

Reid, 34, was recruited to help lead the program when it launched in July, she said, and works directly with young girls four days a week at two different locations. On Tuesdays and Thursdays, she works at St. James Recreation Center and on Wednesdays and Fridays at St. Mary’s Recreation Center, both in the Bronx.

“I have to work on getting [the girls] to be proud of the fact that, yeah, you are a geek, you are a nerd, what’s wrong with that?” said Reid. “There’s absolutely nothing wrong with that. The people who are making the money, doing the innovative processes, are the geeks and the nerds.” 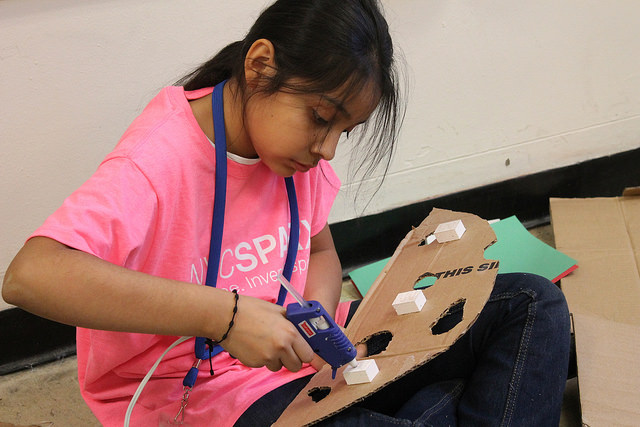 Pamela Flores, 11, uses a hot glue gun to put together a backdrop for an “Angry Birds” project at NYC Sparx.
Photo by Karis Rogerson.

Flores said that she enjoys coming to the class because she likes to create things.

She is especially fond of using the 3D printer, something Gonzalez also enjoys.

“I like to design things and since we have a 3D printer we can print [them],” Gonzalez said. “I would like to learn how to make people and from that learn how to do an animation.”

Reid said she feels like the impact they are having is greater than just teaching girls to embrace their love of technology.

“We have a lot of preteens,” she said. “People aren’t talking to them about some of the things they need to know as they’re getting older. And then it’s like, if you’re interested in technology, is anyone even telling you that it’s okay to do that as your profession? Having those discussions as a group helps them out a lot and those are one of my favorite times when we’re here.”