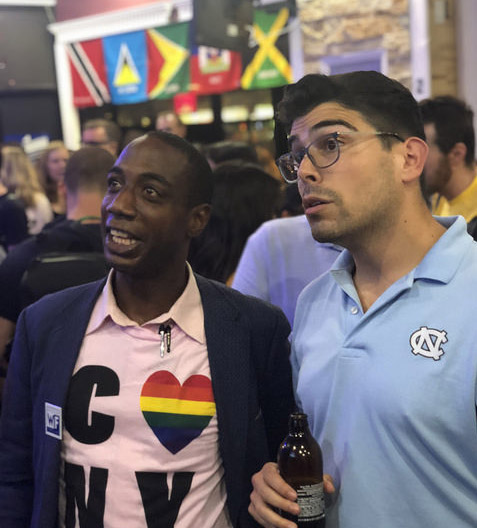 Young progressives at Cynthia Nixon’s Brooklyn watch party are hopeful for a progressive blue wave on Election Day. They are not letting Nixon’s double digit defeat to Gov. Andrew Cuomo and a string of statewide losses get them down.

“As great as it would have been for Cynthia Nixon to win, at least there’s a super strong showing across the board, “ said Spencer Carter, 25, and a Nixon supporter. He was one of the many millennials at Cafe Omar in Flatbush, Brooklyn, last night. “It’s a massive blow to the establishment.”

Carter and other young progressives were fired up by a strong showing for state level insurgent candidates who brought down Internal Democratic Committee (IDC) state senators who team up with Republicans to pass legislation.

But the night was also a blow to progressives. The race for attorney general was not even close, with Public Advocate Letitia James easily beating Zephyr Teachout, a progressive law professor. Jumaane Williams, who was endorsed by Senator Bernie Sanders, also lost the nomination for lieutenant governor.

In her concession speech, Nixon said that the future of progressive politics is bright due to the strong youth presence within the far left movement.

“Our numbers show that the younger you are, the more likely it is that you voted for me today, and I am particularly proud of that fact,” Nixon said. “Because the generation coming of age in Obama and Trump’s America is one of the most progressive generations in history.”

Youth support was strong at Nixon’s party at the cafe. Dozens of young voters gathered both outside and in the venue.

Daniel Maksumov, 24, a neuroscience researcher at New York University, said that in spite of the loss, continued grassroots organization will ultimately lead to a successful blue wave.

“I think grassroots organization is the best way to go, and I think we can’t let a loss stop us, he said. “We have people running for lots of smaller local government roles, and that’s really important,”.

Blake Pruitt, 25, a Nixon volunteer, said continued grassroots effort is what will deliver more progressive victories in the future.

“There’s nothing like going door to door and canvassing and actually talking to people,” Pruitt said. “They can hang up the phone, or ignore texts, or not get on social media, but if you take the time to knock on someone’s door and tell them why you’re so passionate about this candidate, for me, that was what was most impactful.”

Many of the young voters out in support of the progressive left campaign said they distrust traditional Democrats.

“I’m tired of seeing Democrats brand themselves as progressives while purposely trying to halt and stall actual progress,” said Jordan Valerie Allen, who works as a reporter and editor for Millennial Politics. “I think the big thing is seeing who sticks to their values with appropriation bills.”

Corey Shapiro, 25, a Williams volunteer, said that New Yorkers should be willing to shake things up.

“This is New York, and we should definitely be able to set an example with more progressive policies and try things out, and not just do the same old stuff,” he said.

But not all of the young progressives are ready to vote for Cuomo who is seeking his third term.

“I don’t want to vote for Cuomo,” said Alex Cunningham, 26. “I’m probably going to write someone in, I just think he is going to win regardless of if I vote or not.”

But Nixon volunteer Rush Perez, 31, said that voting for Cuomo is necessary.

“The primary is over, it’s time to bury the hatchet,” Perez said. “He’s better than Molinaro, he’s better than any Republican candidate. The voters have spoken. We need to respect that decision.”