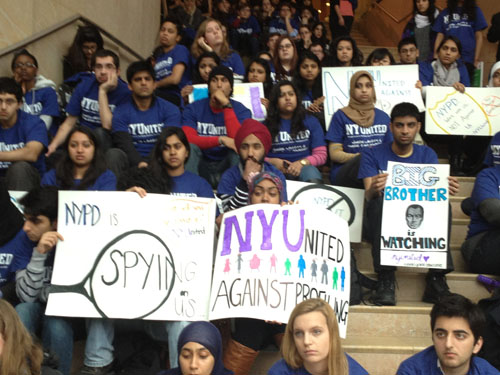 NYU students protest the surveillance of Muslim students by the NYPD. Photo by Dominique Z. Scott

Dressed in blue T-shirts with bold, white writing that read “NYUnited,” and armed with homemade signs that boasted, “Big Brother is Watching” and “NYU is Against Profiling,” more than 100 students sat for a peaceful student address on the grand stairs at New York University’s Kimmel Hall this afternoon.

“Every time I go outside or I go to use to send a text message, I feel that I am being watched,” said Tabbassum Rahman, 21, a soft-spoken senior and Islamic Student Association board member. “No student should have to feel like this.”

NYU’s Islamic Student Association (ISA) organized the town hall event, which invited students and the NYU administration to unite and publicly respond to the recent AP report that unveiled details of NYPD surveillance of Muslim groups on college campuses throughout the Northeast. Mayor Michael Bloomberg has defended the surveillance as legal. 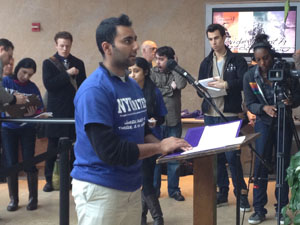 “We want a public apology from the NYPD to NYU students,” said Ahmad Raza, 22, the undergraduate chapter ISA president. “We have done nothing wrong.”

Moderated by student leaders Raza and Saaniya Contractor, 22, the event aimed to unify the campus body, bring awareness of NYPD surveillance on NYU campus, and address concerns regarding the impact of student life on campus.

The 12 guest speakers at the ISA unity event included staff and students from NYU School of Law, the College of Arts Sciences, as well as Imam Khalid Latif, executive director of the Islamic Center and a University/NYPD Chaplain, and Dr. Gabrielle Starr, dean of the College of Arts and Sciences.

“I speak on behalf of the university and President Sexton,” Dr. Starr said. “We stand in fellowship – shoulder to shoulder with our Muslim students.”

Several Muslim students who attended the event said that they now feel scared and uncomfortable when on campus.

“Some people, my friends, stopped coming to (ISA) meetings,” said Raza. “They said their parents don’t want them to come now that police are watching them.”

NYU’s President John Sexton sent a letter to Police Commissioner Ray Kelly on Thursday and expressed “dismay” over the police monitoring. He also addressed the universal feeling of unease on campus within the university’s Muslim community.

“Parents and students now wonder whether continued participation in the University’s Islamic community of worship is a risk; whether an opinion expressed at a student group meeting will end up in a government report; whether testing an argument or challenging conventional wisdom will cause one to become a suspect of some sort,” he wrote.

“The letter was a great first step, but we need the NYPD to discontinue its surveillance and know that we aren’t just going to remain silent,” said Raza.