Professor and new media artist Snow Yunxue Fu standing in her NYU Tisch office with a VR headset on, visiting her photography students’ thesis exhibition in the metaverse. April 28, 2022. Photo by Nikol Mudrová

Professor Snow Yunxue Fu’s tiny, crowded office at Tisch School of the Arts had just enough space to fit the two of us around a small circular table with a laptop and VR headset I came to try. And once I put the massive black “glasses” on my head, I was transported to Washington Square Park – or more precisely, in a metaverse of that park.

As I was standing under the famous arch, it felt like I was in the actual park; I could hear birds beeping in nearby trees and cars honking in the streets behind me, and the sounds really came from these directions.

In front of me, in the middle of the park’s fountain, stood a giant billboard announcing, “Senior Thesis 3D Exhibition Opening.” Professor Fu, a new media artist, created the WSPark metaverse to display her photography students’ final projects to the broader audience available online. Typically, to showcase their student work, Tisch invites people from the art industry to an in-person exhibition, but access to NYU galleries is still restricted due to Covid-19.

“The goal was to create space where we can safely gather,” Fu said. Washington Square Park’s location was an obvious choice for her, as an NYU landmark and as a pandemic symbol. In the yellow fever epidemic during the early 19th century, many who died were buried in the park.

Imagine the metaverse as a digital overlay of the physical world, kind of like the next level of virtual reality with advanced spatial audio and video that allows people—avatars–to interact with others and the surroundings. 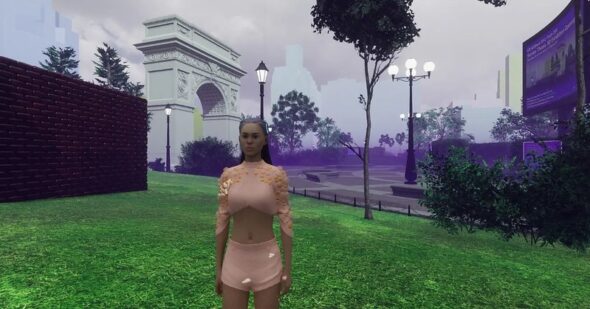 The term metaverse dates back 30 years, first used in the science fiction dystopian novel “Snow Crash” by Neal Stephenson, where people use digital avatars to spend most of their time in the online world. Now, Mark Zuckerberg brings this vision to the masses, and has heavily invested in developing and promoting the metaverse, he even re-named his company from Facebook to Meta.

When Zuckerberg presented his vision, while being in the metaverse himself, he said, among other things, that the metaverse would bring enormous opportunity to individual creators and artists. Fu has the same approach. Apart from teaching, she’s also a new media artist curious about trying out new tools for creating and exhibiting her pieces. Previously, when she made some artwork digitally using virtual reality, 3D imaging, or post-photo editing techniques and wanted to bring it into physical space, she used projectors or 3D printers to show the artwork in its 3D proportions.

Making this jump gets easier with metaverse. Fu views it as “another fruitful and interesting” exhibition method because digitally created artwork doesn’t have to be transformed into a physical environment for people to enjoy it.

With the thesis exhibition, though, she did the opposite – she transformed physical pieces shown in NYU galleries into the online world and placed them on brick mazes that she built all around the Washington Square Park metaverse. And to start my metaverse tour, I needed to get from the arch to a map near the fountain to see locations of all the mazes.

At first, I was worried about how I would be able to move around the metaverse when the office I was in, with the headset on, was so tiny. Fu ensured me I didn’t have to move at all and instructed me on how to use a button on a controller in my right hand to teleport myself – hold the button, point at a place I want to be, and release the button. It seemed easy; however, getting used to the new way of the movement took me a while. 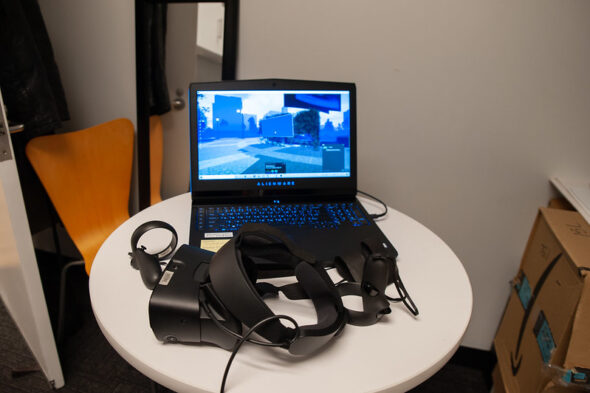 Otherwise, the experience was actually similar to when I visited the same exhibition in the in-person gallery in the lobby of the Tisch building, just three blocks away from the real Washington Square Park. In both cases, I could look at photographs from all angles and distances I wanted. In the metaverse, though, I was probably a bit more focused on “looking,” as my peripheral vision was a bit limited with the headset and therefore, I had to turn my head more frequently and consciously.

The same thing also noticed Dawson Batchelder, one of the 46 NYU Tisch seniors showcasing final projects. “In the digital show, you have to think about moving around (as an avatar). Whereas in the gallery, you can just walk by and not really notice,” he said, contrasting the in-person gallery experience with the metaverse, when we discussed his images a few days before I tried the metaverse myself.

He talked about how the in-person experience can be more seamless too. And that I must confirm. Finding his photograph in the gallery was pretty easy compared to teleporting myself through the WSPark metaverse. But after a while, I finally found the right maze and stood in front of a black-and-white photograph of a sculpture surrounded by shrubbery somewhere in Central Park. Batchelder captured it on his grandpa’s old analog Rolleiflex camera and then digitally incorporated the sculpture into the image after developing the original in the university’s darkroom.

Since high school, Batchelder has been interested in editing images. He used to play around with reality, for example, by making people fly in his photographs. And last semester at NYU, he took a 3D modeling class, and that’s when he got the idea of using digital sculpture to disrupt the analog photograph of shrubbery. “It’s adding a different layer to the image,” he said. And because he is fascinated by creating 3D digital art and wants to continue doing that after graduating from Tisch, he said that the possibilities of metaverse opened up “literally whole another dimension” for him.

For Fu, more options for curating artwork in the digital space is a big plus. “We could do things that would be impossible or very hard otherwise,” she said. For instance, security and changing weather would be an issue in the real-world Washington Square Park. As would setting up mazes and accommodating around 50 projects. In the metaverse, she built the brick mazes to hang the artwork according to the needs of this specific exhibition and can re-use it for potential future ones.

On the contrary, a physical gallery limits artists; they must consider restraints such as different sizes or materials of walls. Adam Ryder, an adjunct who assisted students with curating the in-person exhibition, linked the process to a Rubik’s cube: “A huge amount of work goes into figuring out which bodies of work are going where to maximize the wall space available best.”

The metaverse makes the logistics more manageable, too. There is no need to worry about visiting hours and it can accommodate more people than in a physical gallery. In addition, having exhibitions online has the ability to democratize art. As long as people have access to the internet, they don’t have to travel to see the collection; they can be anywhere in the world.

On the flip side, the technology infrastructure is not developed enough yet, so if that many people were to participate at once, it would require vast amounts of data that are hard to transmit or store.

And, technology is still costly. Snow Yunxue Fu is aware of that, and even though she enjoys utilizing technology innovations in art, not everyone can afford a $300 Metaverse headset. That’s why she made sure that NYU Tisch streams events in the WSPark metaverse on Youtube, Facebook, and Instagram, too, so people can at least watch it. That was my case, too. Before I could come and try out the VR headset at Tisch, I attended the exhibition opening event on the live stream. That was basically me sitting on my couch, looking at the screen of my laptop how Fu’s avatar was moving through the park, without any control of what I see.

However, it may not take long, and I’ll have a headset in my living room, too, since big tech companies have invested in the metaverse; Meta bought Oculus, a headsets manufacturer, and cut its headset price by $100.

Based on the enthusiasm of the Tisch students, Fu predicts that just as paintbrushes innovated cave paintings, digital art will become mainstream art too. Even now, most of their work goes through computers at some point anyway.

“Even if the original artwork doesn’t involve any digital altercations, like a painting, it’s probably being consumed through a digital medium,” said Austin Fenn, another Tisch senior showcasing in the WSP metaverse his senior project of a large-scale collage of 16 photographs of popular products such as Heinz ketchup and Coca-Cola with logos deleted in postproduction, a critique of consumerism.

He thinks about art as just art, no matter whether it is digital or analog. Even metaverse isn’t new for him, it’s just another online platform to show his work. “I’ll continue exhibiting my work online, whether it be Instagram or a virtual reality space,” he said.

While older generations are still trying to understand the digital world and art, said Fu, every year, more of her students consider digital artwork as authentic and valuable as a painting or a photography. “They’re becoming digital natives,” she said.