One Million Roses in Bryant Park 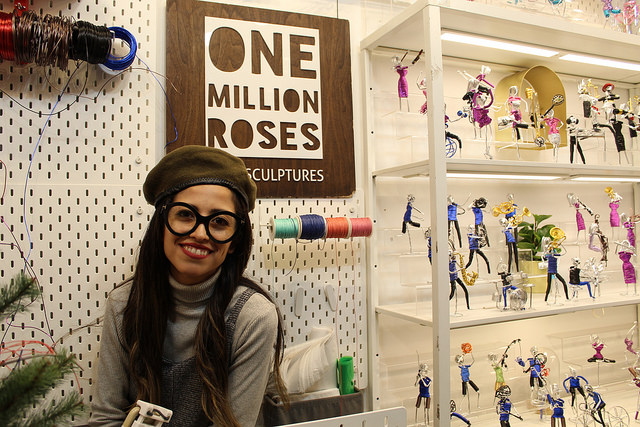 Lucia Guzman, 29, sits in her small shop at the Winter Village in Bryant Park, selling her handmade wire sculptures. Photo by Caroline Aguirre.

As the rain poured on Bryant Park yesterday, the holiday shops remained brightly lit. Pedestrians hopped over large puddles, navigating through the Winter Village which was filled with gift shops and food kiosks.

In front of her counter, sat pink and purple handmade wire roses – the inspiration for her business called One Million Roses.

“We wanted to save money for our wedding, so we started making wire roses and it eventually turned into a business,” said Guzman, who began her business with her husband in 2012.

She has been selling her sculptures at the Winter Village for two years.

“I love it. It’s one of the best places to be in during Christmas,” she said. “You get to meet a lot of people.” 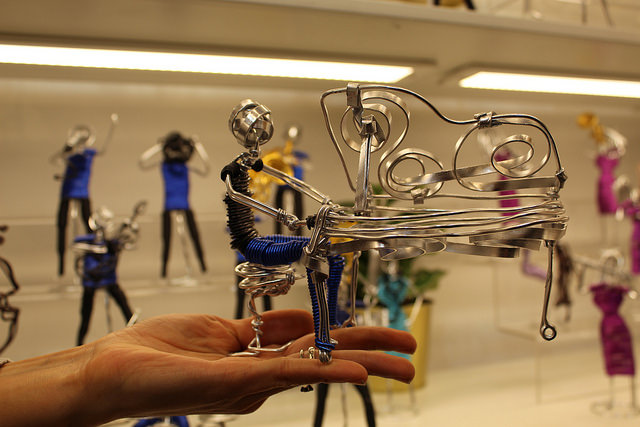 Lucia Guzman owner of One Million Roses, in Bryant Park’s Winter Village, shows one of her handmade wire sculptures,  a man playing the piano. Photo by Caroline Aguirre.

Around 170 vendors fill up the Winter Village at Bryant Park during the holiday season. The holiday shops are open through January 2nd.

As the park workers swept the wet puddles aside, Guzman sat in her cozy shop waiting for customers.

“I’ve seen similar things like this but not in such detail,” said customer, Irina Cherny, 35, of Brooklyn. “She’s just brilliant. I was just telling her that.”

Cherny purchased a keychain, but was also dazzled by a sculpture of a bride and groom.

Patti Richards, 58, from Oklahoma, was looking for Christmas ornaments. She purchased a Santa Claus ornament from Guzman.

“It was different than anything I’ve seen before,” she said.

Guzman is constantly inspired by the diversity of the city, which she said is reflected in her wire sculptures.

Customers can request any figure and Guzman brings it to life with her hands.

“They’re all made by hand – sometimes using tools but mainly our hands,” she said.

Creating one of these pieces can take an hour or more.

Guzman said that one of her most challenging pieces to create was a large angel and a scene of a couple window shopping in New York during Christmas.

As a mother to a toddler, she enjoys working from home when the Winter Village is closed. She is starting to see her son take interest in wire sculpting.

“He’s very interested,” she said. “It’s funny because he sees me working all the time and he already wants to touch the wires. He wraps them up.”

“It’s been a process of adapting, but New York feels like home,” she said.